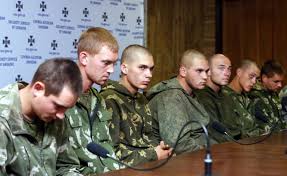 Russian soldiers captured in Ukraine. Russia claimed they had ’got lost’ and accidentally crossed the border (to be found 30 kilometres inside Ukraine)

The NGO Solders’ Mothers of St. Petersburg has reported a sharp increase in complaints from conscripts and their families who say that the young men are being forced to sign contracts purportedly in order to be sent ’for exercises’ to the Rostov oblast on the border with Donbas.  Reports of such coercion are not new, but the increase coincides with the major escalation in overt Russian military involvement in eastern Ukraine over recent weeks.

The NGO first publicly reported evidence that soldiers were being sent to Ukraine and that some had already died in August 2014.  That same week the organization was forcibly registered as a ‘foreign agent’.  Its appeal against that justice ministry decision was rejected in January this year.  If, as is widely believed, the move was aimed at silencing the NGO, it has failed.

Kommersant reports that the organization has called on Russia’s Human Rights Ombudsperson Ella Pamfilova to investigate complaints from conscripts that they are being forced to sign contracts.  Kommersant reports that Pamfilova has requested information and is willing to investigate, and that the defence ministry says that all movements of soldiers are in accordance with the military training plans.

According to Alexander Peredruk from the NGO, there has been an increase in the number of complaints received since the end of December, with over 20 in the last month.  Some say that persuasion is being used, others – threats.

Conscripts from military unit No. 54096 in Mulino, Nizhny Novgorod region allege that the commanders simply told them that they had been transferred to contract service.

The father of another young conscript from the Leningrad oblast was told that he needed to sign a contract which could later be broken.  This was supposedly because he needed to be sent ‘for exercises’ and they weren’t allowed to send conscripts.  Peredruk says that almost all of the complaints involve young men being sent to the Rostov oblast after the contract has been signed.

The organization fears that a repeat is likely of the events in August 2014 when several members of the 18th Mechanized Infantry Brigade, sent to Rostov on the Don from Dagestan were killed, probably in Ukraine.

As reported then, Sergei Krivenko and Ella Polyakova from the NGO, both members of the Russian President’s Human Rights Council wrote to Russia’s Investigative Committee and the military prosecutor asking how 9 soldiers from this brigade had died.  The official version was that they had died on a shooting range in the Rostov oblast on Aug 9 and 11.

There was no answer although in any case involving soldiers killed during exercises, a full investigation is required.

In late August Polyakova also told TV Dozhd that she had been informed of around 100 wounded soldiers having been flown to the military medical academy in St Petersburg.  There was no information about how – or where -  they had received their injuries.

The Russian authorities have generally denied any involvement by Russian soldiers in Ukraine.  When the evidence makes denial simply impossible, they claim that the soldiers had taken leave with President Vladimir Putin claiming that such men were heeding the “call of their heart” and going as volunteers to fight with the Kremlin-backed militants in Donbas.

There are constant reports suggesting that the families of soldiers killed are under enormous pressure to say nothing, not to mention physical attacks or forms of legal or other pressure on those who reveal details.

These have included the savage beating of Lev Schlosberg who first revealed the deaths of Pskov paratroopers in Ukraine and the prosecution of 73-year old Ludmila Bogatenkova, the head of the Soldiers’ Mothers Committee in Buddyonovsk.

A petition is currently gaining thousands of signatures each day in Russian calling for the release of mother of seven, Svetlana Davydova.  She was arrested on Jan 21 on charges of state treason after contacting the Ukrainian embassy in April 2014 to inform them that Russian soldiers from her Smolensk oblast were probably being sent to fight in Ukraine (See: Russians call to release mother of 7 accused of revealing ‘state secrets’)