Portrait of Stalin appears in Russian-occupied CrimeaStalingrad as latest step in re-glorification of tyrantNeo-Nazis in Moscow’s ServicePro-Russian separatists start their own anti-Semitic TV channelPro-Russian, anti-Roma, anti-Semitic and hunting out Ukrainian speakersThe Donetsk anti-Semitic leaflets – what should not be overlookedEast Ukraine crisis and the ’fascist’ matrixRussia continues its false narrative as defender of oppressed minorities in UkraineRussian propaganda claims Jewish organizations supporting Maidan are bringing on "second Holocaust"The Crimean referendum’s neo-Nazi observersPutin’s Neo-Nazi HelpersChief Rabbi and others dismiss Putin’s “anti-Semitic extremist” claimsRussian propaganda must be challengedWestern Media: Don’t distort the situation in Ukraine!Russia’s aggression poses dangers beyond Ukraine’s bordersCrimea: Anti-Semitic card and other provocation in time of siegeMr Putin: We ethnic Russians and Russian speakers don’t need protectionDangerously orchestrated Crimean exerciseRussia claims threat to its interests and life of Russian nationals in UkraineBlood and Berkut Sniper Bullets on the President’s Hands
• Topics / Victims of political repression 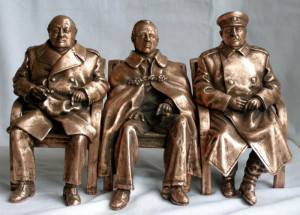 On Feb 5 a monument to three world leaders, including Soviet dictator Joseph Stalin, will be unveiled in Yalta, 10 years after public opposition from Crimean Tatars and other Ukrainians led to the original plans being shelved.  Under Russian occupation the authorities have simply gone ahead and erected the monument entitled ‘The Big Three’ and showing Stalin sitting with US President Franklin Roosevelt and British Prime Minister Winston Churchill.

The unveiling will form part of ceremonies to mark the seventieth anniversary of the Yalta Conference which took place at the Livadia Palace from Feb 4-11, 1945.

The National Movement of Crimean Tatars has called the decision to erect the monument “a clear indication of the revival of neo-Stalinism and return to the times of the Terror and extrajudicial reprisals.”

In a letter addressed to Russian President Vladimir Putin, the heads of both houses of parliament and the Russian Prosecutor General, members of the National Movement write that such thoughtless decisions can only deepen divisions in Crimea.  They call on the Russian leadership, if it really does condemn the crimes of the Stalin regime against whole peoples to decisively reject “this immoral decision of the Crimean authorities”.

The Mejlis, or representative assembly of the Crimean Tatar people, is equally appalled.  Abduraman Egiz told the QHA news agency that the attitude of Crimean Tatars to Stalin is well-known.  “If they do erect the monument, this will be an open demonstration of their attitude to the memory of Crimea and of our people. The authorities should understand that they bear direct responsibility for the consequences of erecting this monument.  This is sacrilege”.

Joseph Stalin ordered the 1944 Deportation of the entire Crimean Tatar People from their homeland and it is easy to understand why the decision to erect a monument to him is seen as a profound affront.

Stalin was also largely responsible for Holodomor or the artificially created Famine of 1932/33; the Terror and for developing the Gulag or labour camps.

The excuse that the monument is simply marking a historic event is unconvincing for two reasons.  There are no memorials to Adolf Hitler, and even in Russia, earlier plans to erect a monument to Stalin in Volgograd [where the Battle of Stalingrad took place in early 1943] did not gain enough support.

The Yalta Agreement itself remains a highly contentious document which has always aroused strong emotion.  Poland feels that the agreement carved up its country while for at very least hundreds of thousands of Ukrainians, Russians and other people from the USSR, the document spelled tragedy.  The agreement said that all those who had been citizens of the USSR or of Yugoslavia would be ‘repatriated’ regardless of their personal wishes.  There are reports of people having committed suicide rather than be returned to the Soviet Union, and many in fact were shot when they arrived.  Much later British officers recounted how they heard loud band music playing at the port, with this having been to drown out the sound of former Soviet citizens brought back against their will being shot.

Back in June 2014, there were reports that a large portrait of Stalin had appeared near the Memorial to soldiers of the Second World War in Simferopol.  This seemed timed to coincide with the anniversary of the Nazi German invasion of the USSR on June 22, 1941.  There were two stands near the Memorial, with posters from the 1940s glorifying the dictator whose military incompetence, as well as the murder during the Terror of a third of the military leadership, caused millions of deaths.

An exhibition glorifying Stalin was brought to Simferopol by a Russian group in December 2012 and promptly destroyed by a group of Crimean Tatars, led by members of the Mejlis.  The organizers of the exhibition had asserted that they only wanted “an objective picture of the historical figure and head of a great country”.

This has broadly been the line pushed by Russian President Vladimir Putin since around 2007 when he began calls for a ‘more positive approach’ to teaching history.  At the Normandy anniversary on June 6 this year he made his support for changing Volgograd back to Stalingrad fairly clear.  See: Stalingrad as latest step in glorification of tyrant

In August 2009 a stone was unveiled at the Kurskaya Circle Line Metro Station in Moscow. The inscription read: “Stalin brought us up – to be true to the people. He inspired us to labour and to heroism!”. The words are from Sergei Mikhalkov’s version of the national anthem, and were removed after Stalin was denounced back in 1956.

Under former KGB officer Putin, who has called the collapse of the Soviet Union the greatest catastrophe of the twentieth century, more than just the old words of the Soviet anthem are being reinstated.