Russian Mother of 7 accused of ‘treason’ released from custody 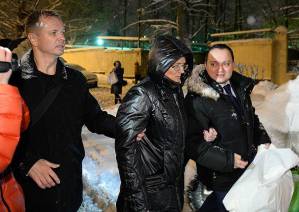 Svetlana Davydova was released from Lefortovo SIZO [remand prison] in Moscow on Tuesday on a signed undertaking not to leave the city.  Kommersant, the newspaper whose report first attracted attention to the case writes that Davydova’s new lawyers were caught unawares by her release.  They believe that it may well have been because of the public outrage aroused by the arrest and detention on charges of ‘treason’ on behalf of Ukraine of the mother of 7 young children, the youngest of whom is only 2 months old.  Over 40 thousand signatures had been passed on Tuesday to the President’s Administration, and a number of deputies of the State Duma had also spoken out in support of Davydova’s release. Members of the Human Rights Council, an advisory board under the President, have also interceded.

It is truly difficult to understand who thought up this prosecution.  As reported, the charges against Davydova relate to a phone call she made to the Ukrainian embassy in April 2014.  She rang to inform them that the military unit next to her home in Vyazma, Smolensk oblast, was deserted, and that the soldiers might have been sent to Donetsk in eastern Ukraine.  Her husband Anatoly Gorlov said that his wife was concerned to save lives, no more.

While it is well-known that embassies are bugged, it is not normal for this to be openly admitted which is what Russia’s FSB has effectively done in this case since the charges relate exclusively to a phone call they should not have heard.

They also concern Russian military involvement in Ukraine which Russia has consistently denied.  By accusing Davydova of ‘state treason’ over her phone call, the investigators are suggesting that she revealed ‘state secrets’.  If she had been talking deranged nonsense, it seems highly unlikely that they would have arrested her waiting, moreover, many months to do so, since the phone call was almost a year ago, shortly before she became pregnant.

Davydova was arrested on Jan 21 and immediately taken to Moscow where a judge remanded her in custody for 2 months, with neither investigators, nor the court considering the fact that she is still breastfeeding her youngest child.  The lawyer provided by the investigators failed to appeal against her detention and simply encouraged her to ’cooperate with the investigators’.  More details here: Russians call to release mother of 7 accused of revealing ’state secrets’