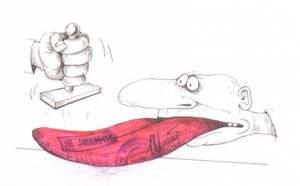 The Verkhovna Rada voted on Feb 10 to dissolve the National Expert Commission on the Defence of Public Morality.  This ‘Morality Commission’ became notorious for using a dangerously woolly law to restrict freedom of speech, applying selective, and sometimes politically motivated, ‘morality’.

The draft bill adopted was registered on Dec 26, 2014 and addresses only the Commission, not the law on the protection of public morality.   Its author - Olha Chervakova - was a journalist before being elected to parliament in Oct 2014 and is deputy chairperson of the parliamentary committee on freedom of speech.  During the parliamentary discussion on Tuesday, she stressed the cost-saving benefits of dissolving the Commission which had over the last 5 years cost the taxpayer 30 million UAH.

Dissolution of this Commission was a commitment made in the parliamentary coalition agreement.  A number of media organizations had already issued an appeal calling on MPs to support Draft Law  №1647.

In their appeal they pointed out that there are 9 public bodies which the Constitution and legislation give powers linked with public morality issues.  In contrast, they said, the Morality Commission does not have powers as an expert institution able to give legally significant opinions, or as a law enforcement body.

The media organizations were generally damning in their assessment of the Morality Commission, pointing out that in more than 10 years of its existence it had not achieved its supposed aim.  It had instead constantly tried to restrict freedom of speech on the basis of far-fetched conclusions and decisions which, in breach of the law, were not published.  The signing bodies, which included the civic initiative Stop Censorship; the Journalist Ethics Commission, journalist unions, the Institute for Mass Information; the Media Law Institute, Telekritika and others, were convinced that the new bill would bring Ukraine’s legislation in line with the Constitution and recommendations from the Council of Europe.

Plans to dissolve the Morality Commission were announced early into the presidency of Viktor Yanukovych, but never carried out.   The Commission continued receiving generous public funding, but was much less high-profile.

There were, however, worrying moves to make very dangerous amendments to the Law on the Protection of Public Morality.  In October 2011, just days after the politically motivated 7-year sentence passed on Yanukovych’s main opponent at the time, Yulia Tymoshenko, amendments were passed to the law in a first reading.  These gave more scope for restrictions, closure of websites, for example, and more power to officials of the Morality Commission.

The Yanukovych regime had clearly understood the uses that could be made of ‘selective morality’, however the problems with both the law on public morality and the commission had been present from their creation in 2004.  The terms used in the law are woolly, unclear and dangerously open to subjective interpretation what precisely “harms public morality”.  This made application of the law unforeseeable.  The use of this vagueness as a weapon against dissident views was clearly recognized with the draft bill proposed in 2011 adding another ominously woolly term: “products demonstrating various forms of anti-social and criminal activities”.

Ironically, the Yanukovych regime introduced the most repressive measures against freedom of speech through other means, rather than the law on morality.  The latter was convenient as a means of blurring the real issues and dividing the opposition.  A fair number of people supported methods to ‘protect public morality’, with this often cleverly manipulated.  Broad agreement that websites containing child pornography should be closed immediately was used, for example, to criminalize the ‘circulation’ of any pornography.

The Morality Commission was also notoriously influenced by the views and interests of those in power.  In June 2009, under President Viktor Yushchenko, the Commission issued a decision banning a Russian programme about Holodomor 1932-1933, finding in it “elements suggesting propaganda of ethnic and religious enmity”.  In March 2011,  under Yanukovych, it chose to do nothing about a book with analogous content.   The Commission increasingly stalled on issuing opinions which could irritate those in power.  After the violent dispersing of peaceful EuroMaidan protesters on Nov 30, 2014, the head of the Commission Vasyl Kostytsky issued a statement which in no way condemned the actions of the Berkut riot police.

The dissolution of this much discredited body is to be welcomed however it must be questioned whether this is enough to bring Ukraine into line with other European countries while the vague and unforeseeable provisions of the law on protection of public morality remain in force.