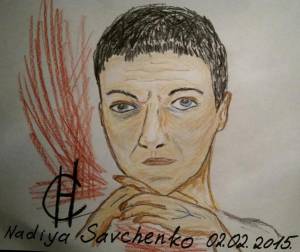 Everybody knows who will decide whether Nadiya Savchenko, now on her 55th day of hunger strike, is left to die in Russian detention.  Stern words and reminders that Russia is in breach of the Minsk Agreement through its refusal to release her and other prisoners, in its ongoing aggression against Ukraine, have not worked.  The latest sanctions which appear to have mainly targeted militants in Ukraine are manifestly not enough.

Nadiya Savchenko has been on hunger strike in Russian ‘pre-trial detention’ since Dec 13, 2014.  She says she has not seen the ‘investigator’ supposedly studying her case since New Year.  It is just possible he will appear before the next court hearing on Feb 10, but unlikely.  Why bother when it is already known that the prosecution will be seeking to extend this ‘pre-trial investigation’ until May 10 and that, without serious pressure from western countries, the court will stamp the relevant document?

There have been seriously stern words from western countries.  On Feb 5 Jen Psaki, US State Department spokesperson’s words* could not have been clearer and ended with a call “on Russia to release Nadiya Savchenko and all other Ukrainian hostages immediately, a commitment Russia made when it signed the Minsk agreements in September of last year.”

Anne Brasseur, President of the Parliamentary Assembly of the Council of Europe [PACE] called “what is happening with Nadiya Savchenko is terrible from every point of view. She is a Ukrainian MP, a PACE member, and most importantly, she is a person who is dying in a detention unit of a member state of the Council of Europe.”  She goes on to indicate that Russia must release her.  However, Russia was given 24 hours to release her by the same PACE on Jan 28.

Russia’s response to the PACE was swift, but twisted.  By Jan 29, it was announced that a new charge was being laid against her – of ‘illegally crossing the border’.  The cynicism is staggering since this new charge even contradicts the Russian version of events, which claims that Savchenko entered as a refugee.  In fact, Ukrainian and western governments and the public are fully aware that Savchenko was captured by Kremlin-backed militants in Ukraine and taken against her will to Russia.

The legal nihilism that Russia is demonstrating has gained most publicity over its treatment over Nadiya Savchenko and the risk that she will die in Russian captivity.  The same cynical lawlessness is, however, being shown in the ongoing detention on falsified and far-fetched ‘terrorist plot’ charges of Ukrainian film director Oleg Sentsov and civic activist Oleksandr Kolchenko, and in the repressive measures, including arrests, of Crimean Tatars.  The latest two arrests have been over a protest that took place before Russia annexed Crimea, making any criminal charges under Russian law a flagrant demonstration of legal illiteracy or cynical disregard for rule of law.

Nadiya Savchenko is one of thousands of victims of Russia’s aggression against Ukraine.  She fully understands this and in her courageous willingness to carry on her hunger strike to the end affirms that “the death of one fighter does not mean the war is lost”.

It does not, but she is also a PACE delegate with diplomatic immunity, a prisoner whose release falls directly within the Minsk Agreement, and failure by the West to impose any type of punitive measures now as a form of pressure will be a grave defeat.

*  “We want to reiterate our serious concerns about reports that Nadiya Savchenko is gravely ill while she remains a hostage to Russian authorities. Nadiya has been on a hunger strike for 54 days to protest the terms of her illegal detention, and her life now hangs in the balance.

She was captured by Russian-backed separatists in June of 2014 and illegally moved across the border and handed over to Russian authorities, who have treated her in an appalling manner. While imprisoned, Nadiya has been forced to undergo psychiatric evaluation, solitary confinement, restricted access to a Ukrainian consular official, and isolation from her family. We call on Russia to release Nadiya Savchenko and all other Ukrainian hostages immediately, a commitment Russia made when it signed the Minsk agreements in September of last year.”