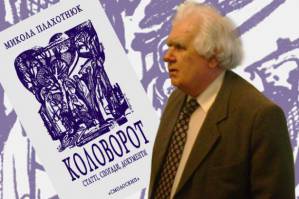 The death on Feb 5 has been announced of Mykola Plakhotnyuk, former political prisoner, victim of punitive psychiatry and member of the important 1960s ‘Club for Creative Young People’.  In later years Mykola Plakhotnyuk played a major role in creating a museum about the 1960s movement in Ukraine.

Mykola Plakhotnyuk was born on May 8, 1936 in the Kursk oblast in Russia where his family, deemed ‘kulaks’ [more well-to-do peasants] had fled from starvation and repression. The family returned to Tykhy Khutir in the Kyiv oblast during the War.

Plakhotnyuk trained as a doctor, graduating from the Kyiv Medical College in 1959.  He became involved in the activities of the ‘Klub tvorchoyi molodi’ [‘Club for Creative Young People’] in 1963.  The Club was not in itself a political organization, but attracted many of the people like Ivan Svitlychny, Yevhen Sverstyuk, Viacheslav Chornovol who were pivotal to the Ukrainian dissident movement.

During the first wave of arrests of members of the Ukrainian intelligentsia in August 1965, a good friend of Plakhotnyuk was arrested.  His refusal to give testimony against Y. Hevrych and the support he showed for both Hevrych and his family were later viewed in the notorious Dnipropetrovsk Special Psychiatric Hospital as the beginning of his ‘illness’.

He led protests against the arrests on May 22 1967 of people taking part in poetry reading and memorial gathering at the Monument to Taras Shevchenko in Kyiv.  Plakhotnyuk was not then arrested, but was dismissed from his job.

He was not, however, silenced, and over the following years spoke out in defence of others, such as the poet Ivan Sokulsky, arrested in 1969.  He was also involved in passing samizdat material abroad.   It was this that the charges of ‘anti-Soviet agitation and propaganda’ were  based after his arrest on Jan 12, 1972 [the second major wave of arrests].

Plakhotnyuk was sent to the notorious Serbsky Institute in Moscow for psychiatric examination.  There he was diagnosed as having ‘schizophrenia with a persecution complex and being periodically not in control of his actions’.

From 1972 – 1978 he was subjected to forced ‘psychiatric treatment’ at the special psychiatric hospitals [under the KGB] in Dnipropetrovsk and Kazan.

Although several expert opinions had called for his release, he was only discharged finally in 1981.

On 6 September 1981 he was arrested on a trumped-up charge.  This time the psychiatric assessments found him to be fit, and in April 1982 he received a 4 year term of imprisonment, though was released on probation early in June 1984.

He worked as a doctor with tuberculosis patients and from 1991 was a member of the Ukrainian Helsinki – 90 Committee and of the Board of the Ukrainian Association of Political Prisoners and Victims of Repression.  From 1994 he was active in organizing the Museum of the Shistdesyatnyky Movement [in the 1960s] which opened in 2012.