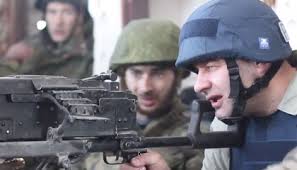 Russian actor Mikhail Porechenkov visited the Kremlin-backed militants laying siege on Donetsk Airport and, as can be seen, decided ’to have a go’ at shooting at Ukrainian soldiers himself

The anti-Ukrainian propaganda and warmongering on Russian television became virulent enough during 2014 to hit the world headlines.  It was most often the fakes and truly gross lies over the downing of the Malaysian airliner on July 17, or the claim that Ukrainian soldiers had ‘crucified’ the three-year-old son of a militant that attracted attention. The zombifying effect of a daily diet of propaganda and the aggression and hatred aroused from the constant claims of atrocities by a ’fascist junta’ and its soldiers, have been all too often ignored.

Ignored in the west, that is, since Russia and its proxies in eastern Ukraine and Crimea are all too aware of the power of propaganda.  The most pro-Kremlin Russian channels were quickly brought in to replace the Ukrainian, first in Crimea, , then in those cities of Donbas where Kremlin-backed militants seized control.

Members of a human rights mission visited Slovyansk and Kramatorsk a few months after the cities had been freed.  The local inhabitants they spoke with were generally  positive about the Ukrainian soldiers present and wanted them to remain, but had been very wary at first, believing - as Russian propaganda channels had told them - that they should expect horrific reprisals.

While the encroachments on freedom of expression in Russia give grounds for suspecting that some Russians asked by phone to express their views might be afraid to express dissident opinions, the general trends in Levada Centre opinion polls are telling.  In Jan 2014, 26% of Russians had a negative attitude to Ukraine.  By November this had shot up to 59%.

This new law, if signed into force by President Petro Poroshenko, will mean a ban on films of Russian production [here and further, the law speaks of ‘an aggressor state’] as well as those spreading propaganda about its law enforcement bodies, armed forces, other military or enforcement formations.

It remains unclear whether in fact the amendment put forward by Victoria Syumar, head of the parliamentary committee on freedom of speech was rejected.  She had proposed that the blanket ban on Russian film production should cover the period from Jan 1, 2014.  All monitoring certainly suggests a serious increase in anti-Ukrainian propaganda from that time.  Radical Party leader Oleh Lyashko first insisted that Amendment 28 be voted on separately from the actual bill, and then that any reference to a timeframe be removed.  The amendment was adopted, and Syumar herself believes that this was with the blanket ban on all production since 1991, however both versions have been reported in the media.

The question of whether a blanket ban is needed is certainly contentious.  Although some degree of anti-Ukrainian propaganda became common following the 2004 Orange Revolution, the dangerous level of overt lying and warmongering appeared in 2014 in connection first with EuroMaidan, then over Russia’s annexation of Crimea.

A ban on all production since 1991 will almost certainly have economic ramifications since a large percentage of films and serials come from Russia. It will probably also be viewed by many people as excessive.  One film, for example, which will now be banned is Andrey Zvyagintsev’s ’Leviathon’ which won awards at the Cannes Film Festival, but has come under heavy criticism in Russia for its negative portrayal of contemporary Russian society.

A blanket ban does, however, remove any inevitable difficulties which would arise if one body or another was given the task of determining whether a film should fall under a ban.  One body – the National Expert Commission on the Protection of Public Morality - which in the past has made such recommendations, has so compromised itself in the public eye that a draft law proposing to dissolve it has received strong support from all media associations.

Two Opposition Bloc MPs – Yury Boiko and Mykhailo Papiev – have tabled a resolution aimed at getting the bill revoked due to breaches of parliamentary procedure.  This would delay, but not halt the process.

The lack of funding for cinema and other production in Ukraine and inability to compete with Russia have resulted in Russian films, serials, and spectacular gala concerts occupying a serious part of the market.  There was public outcry in Ukraine over TV Inter’s New Year show which included at least three Russian figures notorious for their anti-Ukrainian views and support for the militants in eastern Ukraine, however monitoring by the National Broadcasting Council found that a number of other channels had also broadcast Russian shows during the holiday period involving those or other Russians who share the same anti-Ukrainian views.

In recent months there have been calls for united European efforts to counter Russian propaganda.  Understandably the initiative for these and other measures has often come from Baltic Republics who often feel targeted by the same kind of propaganda as is directed at Ukraine.

The ban adopted by parliament on Feb 5 may have gone too far and could, for that reason, be vetoed by the President.  Ukraine is, however, facing a major offensive against it with virulent propaganda being one of the weapons, and serious measures are undoubtedly needed to defend the country and its people.