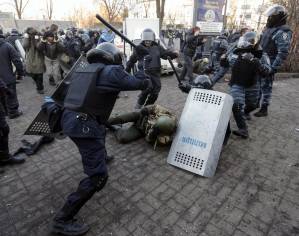 28-year-old Alexander Kostenko has been remanded in custody for two months by a Crimean court on charges linked with EuroMaidan protests in Kyiv last February before Russia’s invasion of Crimea.  His is the first such arrest, but judging by the Russian-installed ‘prosecutor’s’ website, unlikely to be the last.  The development coincides with the second arrest and detention of a Crimean Tatar activist also under Russian legislation in connection with events which took place before annexation.

The title on the prosecutor’s website is chilling: “One of the suspects in the case regarding attempts on the life of Berkut officers has been remanded in custody”.  Kostenko is, in fact, ‘only’ charged under Article 115 of the Russian Criminal Code, namely, “deliberate infliction of mild damage to health for motives of political, ideological, racial, ethnic or religious hatred or enmity, or hatred or enmity in relation to a social group”.

There is no information about the specific injury the officer from the Crimean Berkut unit is alleged to have incurred. Nor is there any clarity as to how the “investigative body supported by the Crimean Prosecutor’s Office” should have determined that the injury was inflicted deliberately, and presumably “for political or ideological motives”.

Neither this report, nor other arrests made in the last weeks give any grounds for believing that the court will conscientiously examine the evidence brought for these charges.

The court in Simferopol on Feb 8 allowed the application for Kostenko to be remanded in custody for 2 months. The judge therefore chose to ignore the fact that any alleged offence took place under Ukrainian law, and cannot be tried in accordance with Russian legislation.  Not to mention the significant detail that the protests took place at least a year ago in a different part of Ukraine.  The only possible testimony is likely to be from the 49 Berkut officers who have been declared ‘victims’ in this case.

Worth recalling that Berkut units were heavily implicated in the violent measures deployed against predominantly peaceful EuroMaidan protesters. Following the gunning down of protesters on Feb 20 by police snipers, and subsequent flight to Russia of the then President Viktor Yanukoyvch and his people, the Interior Ministry’s Berkut special force unit was dissolved.  Some of these officers, including the 49 ‘victims’ moved to Crimea.  It is likely that at least some actively fled  prosecution in Ukraine for offences linked with violent methods used to crush civic protest.

The report states that this “criminal investigation into attempts on the life of Berkut Crimean unit officers during the mass disturbances in Kyiv in February this [sic] year by radical Maidan activists was one of the first decisions of the republic’s prosecutor Natalya Poklonskaya. “

The injuries these 49 Berkut officers allegedly sustained “in the course of street disturbances” are said to have been of varying degrees of seriousness, and included injuries from firearms, and inflammatory devices.  “One of the officers died as a result of the actions of radicals.”

This investigation which is under the “special control of Poklonskaya” is taking place far from the scene of the events, under extremely specific circumstances.  One of the most disturbing of these circumstances is effectively geopolitical.  If Poklonskaya wants prosecutions under Russian law for one of her first decisions after being installed in office, she must find suspects in Crimea.  The suspicion is inevitable that Kostenko was ‘identified’ not as the suspected perpetrator of a specific crime, but as a EuroMaidan activist. The supposed ‘victims’, investigators and court could be relied on to add the necessary details.

There are grounds for believing that a similar process is underway with respect to charges against Crimean Tatars over a protest held on Feb 26, 2014.  Having banished the head of the Mejlis, or Crimean Tatar representative assembly Refat Chubarov from his homeland, the authorities arrested deputy head Akhtem Chyyhoz.  The fact that Chubarov has stated that he organized the demonstration and that video footage shows Chyyhoz trying to calm the crowd is of no concern to Russia’s Investigative Committee which clearly needed a top Mejlis ‘suspect’.

A precedent was provided in May last year when the FSB [Russian security service] arrested four Crimean opponents of Russia’s annexation of Crimea and EuroMaidan supporters. Ukrainian film director Oleg Sentsov, civic activist Oleksandr Kolchenko and two others were charged with a ‘Right Sector terrorist plot’. Details like the lack of any links with the nationalist Right Sector, the absence of any terrorist acts, and wildly inept miscasting of the main suspects, have been ignored, as have calls from the USA, Parliamentary Assembly of the Council of Europe and others for the men’s release.

With Poklonskaya having this ‘case’ under her personal control, and 49 supposed ‘victims’ of crimes, any EuroMaidan activist in Crimea may well be wondering if they’re next.  Many Crimean Tatars are likely to be asking the same question.

In both cases, the arguments for leaving Crimea will seem cogent.  It seems likely that this is one of the intended effects of these latest demonstrations of legal thuggery.