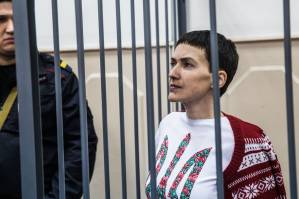 On the 60th day of her indefinite hunger strike, Nadiya Savchenko’s detention was extended until May 13 in a move that may have been anticipated, but remains profoundly shocking.  Judge Artur Karpov, notorious for his role in the Magnitsky investigation, ‘found no grounds’ for releasing the imprisoned Ukrainian MP who has been convicted of no crime and will almost certainly die before the next court hearing if left in Russian detention.

Nadiya’s mother and sister were in court on Tuesday, as well as Ukrainian MPs, diplomats and a large number of journalists.  Savchenko’s first public appearance since before her hunger strike began on Dec 13 show her looking gaunt and frighteningly thin.  Her lawyers report that the convoy officer refused to give water to her in court – monstrous callousness given her condition after 60 days without any food,

She was, as ever, quite unbroken, as seen in her response to judge Artur Karpov’s standard questions:

“Have you been convicted before by a Russian court?”

“Thank God, I’d never been in Russia before”

As Karpov left to ‘consider’ the defence’s application for his removal from the proceedings, Savchenko called out “clowns!” 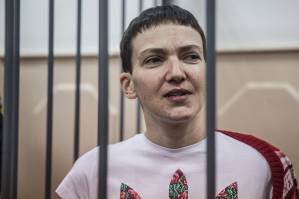 The assessment of Tuesday’s ‘court hearing’ was accurate enough.  The term Basmanny justice was coined because the Basmanny Court’s judges could always be trusted to produce the rulings required of them.  In this case, pro-Kremlin media had reported that the detention had been extended an hour or more before this was officially announced in court.

In the video here http://svoboda.org/media/video/26840521.html  Nadiya Savchenko explains that she has learned Russian while imprisoned.  She has no hatred for Russians as the prosecution accuses her of and did not kill any journalists.

She mentions that she has received many letters from Russians and sees that they understand and have their own views.  “You don’t see us as enemies, and I don’t see you as such”.  She thanks people for their support.

“I would never say that Russians are bad except for those venal, lying creatures, like the investigators and the court, but understand, there is no bad nation, there are bad people. We will be friends only with those Russians who do not take up arms and come to my country to kill my people”.

Mariya Savchenko, Nadiya’s mother also speaks on the video, explaining that she tried to persuade her daughter to give up her hunger strike, but to no avail.  “She’s a fighter”.

That no justice can be expected from a Russian court had long been known.   Nobody, least of all her defence, is in any doubt that Savchenko’s release – and therefore, her life –  depends on decisions made in the Kremlin, and/or political deals reached at diplomatic level.

Nadiya Savchenko is provably innocent of the charges which Russia has brought against her, with the evidence lying in an alibi which can only be damning for Russia.  She was nowhere near the place where two Russian journalists died in a mortar attack because she had already been taken prisoner by the Kremlin-backed militants who then took her by force into Russia.  The puppet investigators and rubber stamp courts have thus far chosen to ignore this and done what their taskmasters require of them, namely imprisoning, but not trying, the former military pilot.