Russian TV boasts that Russian army can take all of Europe 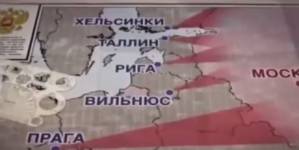 In its Sunday news round-up, Russia’s TV 5 presented an animated version of how Russian soldiers and equipment can reach Poland within a day, walk into a number of neighbouring countries, and could also go for Germany, it being a good while since ’our’ soldiers were there.

In fun?  That probably depends for whom.  For Poles, the Baltic States and other neighbours there was menace rather than humour, especially given the preceding reports and interviews with their overt manipulation of the viewer and undisguised warmongering.

The performance (at around 53.33 here https://youtube.com/watch?v=E0al3qai_c4 ) follows the beginning of a major attack on Polish foreign minister Grzegorz Schetyna whose remarks about ceremonies marking the end of WWII prompted an Orwellian 5 minutes of hatred on multiple Russian TV channels this week.  Schetyna was asked for comments about Polish President Borysław Komorowski’s initiative to hold ceremonies marking the end of the War at Westerplatte which the Nazi’s attacked in the early hours of Sept. 1, 1939.  Schetyna said:

“... it isn’t natural that the ceremony marking the end of the War is organized where the War began.  Yet why have we all become used to it being so easy, that it’s Moscow that is the place where the end of the military action is marked, and not, for example, London or Berlin?  That would be even more natural”.

The first sentence is placed at the end in the Russian, thus making sure that it is interpreted as referring to Moscow as the place where the War began.  It could refer to Westerplatte. Or it could be a not overly diplomatic, but entirely correct, reference to the Molotov-Ribbentrop secret pact signed in Moscow on Aug 23, 1939.  This did indeed unfurl Nazi aggression, as well of course, as the Soviet invasion on Sept 17, 1939 of Western Ukraine which was then part of Poland.

The presenter claims that it is ‘impossible to guess’ why Schetyna should have said this.  In fact, it requires only the honesty to confront the pact between Hitler and Stalin and the secret agreement to carve up Poland.

Instead the viewers are encouraged to feel aggrieved and angry, and then to delight in a graphic demonstration of who really is boss.

“Warsaw is too simple. From Moscow to Poland’s capital there are a mere 1300 kilometres. A T-90 tank, for example, would get to the suburbs in less than a day after setting out. By that time airborne forces – they need only two hours to be moved there – would have time to hold a rehearsal, cook festive porridge and meat and iron their uniforms. Does it feel like we haven’t been in Berlin for a long time?  May 9 is an excellent opportunity for a friendly visit.  1800 kilometres for a modern army is no distance, especially since many Russian officers know Germany pretty well, they won’t even need a map.  Prague, Helsinki, Vilnius, Tallin, Riga – they’re altogether nearby.  Festive Russian soldiers could get to half those cities on foot”.

For those with sufficient geographical distance and military clout, unmarred by any regrettable faith in the worth of documents like the Budapest Memorandum, this may seem harmless enough.

One can only recommend that they find a translator who can guide them through the entire programme.  It will cast a new slant on phrases about the need for a diplomatic solution to the situation in eastern Ukraine.

The key themes are presented at the very beginning then repeated incessantly. The Ukrainian army, it is claimed, is unashamedly deploying sophisticated weapons against Donetsk, and the militants believe that some of this arsenal is from NATO.  We are told there is masses of evidence for this, but shown none.

Why, it is asked, is Kyiv asking for weapons from America and not listening to its own people?  Careful juxtaposition of images and words creates an overwhelming impression of the Ukrainian government and military relentlessly fighting and killing the local population.   The militants, we are told, have asked for a corridor in order to evacuate civilians but that was disrupted by – guess who – the Ukrainian military who, it is asserted, “are again bombing cities using cluster bombs”.

Russian President Vladimir Putin is presented in a largely peace-brokering capacity.  In reporting the flash visit by German Chancellor Angela Merkel and French President Francois Hollande and the planned meeting in Minsk on Wednesday, the presenter states that “Russia is not a party to the conflict, it is more like an authoritative intermediary which one of the parties listens to”.

Viewers whose memory and mental faculties have not collapsed under the weight of lies and distortion might like to note the presentation of the Minsk accords and the supposed need for ‘concessions’.  This, we learn, is because ‘half of the provisions have not begun working, while the others are obviously out-of-date”.

What that means is that most of the commitments made by Russia and its proxies in eastern Ukraine have not been met, and the militants have seized large areas of Donbas beyond what was agreed to in Minsk.

Viewers are also given a version of events around EuroMaidan from ex-Prime Minister Mykola Azarov who fled to Russia together with ex-President Viktor Yanukovych and others who enjoyed power and vast opportunity to plunder the country under his presidency.

From beginning to end, the viewer is presented with clear conclusions and interpretations: Ukraine’s government and military are the villains of the piece, with the militants and Russia basically trying to restore peace and save lives.

All so very easy and, most importantly, the view of all right-thinking citizens.  Turn on any television channel in Russia, you’ll see.