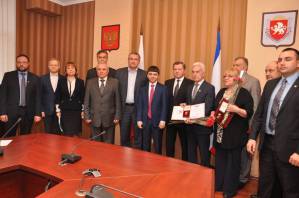 A delegation from Bulgaria’s extreme right Ataka party has visited Crimea and assured both Russian and Russian-installed Crimean officials of their party’s recognition and support for Crimea “as part of the Russian Federation”.

This support was not, in fact, a surprise since one of the delegates – Magdalena Tasheva – was among the members of Europe’s far-right, neo-Nazi and Stalinist parties whom Russia invited to act as ‘international observers’ for what they termed a referendum on March 16.   She was presumably much impressed and accepted a similar invitation to ‘observe’ the Nov 2 ‘elections’ organized in breach of the Minsk Agreement by the Kremlin-backed militants of the self-proclaimed ‘Donetsk and Luhansk people’s republics’.   On both occasions, the ‘observers’ found the events to have been run in exemplary fashion and “an example for us all”.

According to the Crimean parliament’s press service, Volen Siderov, one of the delegates present and founder of the Ataka Party “was the only Bulgarian politician after the state coup in Kyiv who gave an objective assessment of what had happened.”   Since his party was invited to observe the Crimean ‘referendum’ less than a month later, one assumes that this ‘assessment’ was on a par with that of Russian President Vladimir Putin who claimed that ‘fascist and anti-Semitic’ hordes had seized power in Kyiv.  Siderov is reported to have threatened to withdraw his party’s support from Bulgaria’s coalition government if it supported further sanctions against Russia.

Siderov’s party is described on Wikipedia as “ultranationalist and racist, especially anti-Semitic and anti-Roma, as well as xenophobic, especially anti-Muslim and anti-Turkish.   Like many of the far-right and extreme left parties supporting Russia, such as Marine Le Pen’s National Front, Hungary’s Jobbik and Greece’s Syrica party, Ataka is firmly against the EU.

According to the parliamentary press service, the parties discussed prospects for cooperation in the economic; energy; agricultural; educational; sports and cultural spheres.

Russian officials were also effusive in their praise of their Bulgarians comrades.  The Russian President’s representative in Crimea Oleg Belaventsev thanked the delegation for their moral support. “We know well what Europe and the USA have done to Bulgaria. You were a thriving country and see what’s happened now. Therefore a huge thank you for your support”.

As far back as April 2014, well-known specialist on far-right organizations Anton Shekhovtsov reported that “today’s European extreme right parties and organisations are the most ardent supporters of Putin’s political agenda”   Shekhovtsov is among those observers who had long pointed to these ties. Other commentators had more difficulty in overcoming the cognitive dissonance experienced when trying to reconcile Moscow’s strident attacks on what it claims was a ‘fascist’ and ‘far-right’ coup in Ukraine with its support, including financial, for Europe’s most radical far-right parties. The dissonance became more acute as the links emerged between Russian fascist ideologue Alexander Dugin and the new extreme left Syriza Party which has come to power in Greece, on the one hand, and the support from Marine le Pen for Syriza, on the other.  Both are linked with strong support for Putin’s Russia and all share the same anti-EU platform.

At the meeting in Crimea on Friday, Siderov stated that “the Ataka Party and we as parliamentarians – that Bulgarian recognizes Crimea as part of the Russian Federation”.  It seems unlikely that this rather confused statement warrants adding Bulgaria to the select group of countries that have recognized Russia’s annexation of Ukrainian Crimea, namely Afghanistan, Cuba, Nicaragua, Syria, Venezuela and North Korea.   Who doesn’t need friends after all?