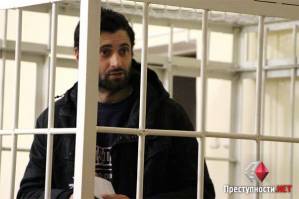 In the last week two Ukrainian journalists have been detained on suspicion of committing ‘state treason’.  If the detention on Feb 8 of Ivano-Frankivsk blogger Ruslan Kotsaba was clearly unjustified, but the charges seemed to warrant investigation, the new arrest of journalist Andriy Zakharchuk can have no justification in a post-Maidan democratic Ukraine.

The journalist’s father Vasyl Zakharchuk told Prestupnosti.net that his son writes about sport, culture and public life in St Petersburg.  This can easily be checked and does indeed appear to be the case.  Vasyl Zakharchuk explains that FAN was starting up a project covering life in Ukraine and his son’s work trip was to gather information about how people live in cities in the South-East of Ukraine.  Whatever the federal news agency’s plans, the article which Zakharchuk wrote about his visit to Odessa contained nothing suspicious at all.

Nor is it clear what it could contain that would warrant being accused of ‘state treason’.

The charges appear to derive from his activities in Mykolaiv.  The investigators have found something deeply incriminating in the fact that a journalist should have taken photos of the Inhulsky and some pedestrian bridges; a shipbuilding factory and the Mykolaiv armoured tank factory.  The two factories are part of the state defence industry.

A camera, tablet and laptop were taken away and the prosecutor informs “that in the journalist’s technology correspondence was discovered that confirms that he belongs to a Russian news agency”.   It would have been simpler to just ask him.

Most worryingly, the prosecutor’s request to remand Zakharchuk in custody began with reference to the parliamentary resolution adopted on Jan 27 which declared Russia to be an aggressor state.  The prosecutor then cited Article 65 of Ukraine’s Constitution which states that “Defence of the Motherland, of the independence and territorial indivisibility of Ukraine, and respect for its state symbols, are the duties of citizens of Ukraine. Citizens perform military service in accordance with the law.”

He then asserted that “during armed conflict in the east of Ukraine in January 2015 Ukrainian national Andrei Zakharchuk, working for the Russian news agency FAN and Nevskie Novosti, and in breach of Article 65 of Ukraine’s Constitution, and aware that he was in a criminal link with an aggressor state, in order to provide it with assistance in carrying out subversive activity against Ukraine, passed on photographic material for dishonest coverage of events in Ukraine and inciting separatist moods in Ukraine.  The said information agencies are propaganda vehicles, that is, they cover events in Ukraine by distorting facts and providing false information.”

The prosecutor then moves on to the specific photos taken “in order to pass the information to the Russian Federation aggressor state”.

According to this version, Zakharchuk was passing on photos of the armoured tank factory to a Russian news agency “for the purpose of propaganda-filled and anti-Ukraine coverage of events in Ukraine, the anti-terrorist operation, including the technical state of the Ukrainian defence complex and the possibilities for countering illegal armed formations in the East of Ukraine, thus posing a threat to Ukraine’s national security in the information and military spheres”.

On the basis of the above, the prosecutor concluded that Andrei Zakharchuk was “justifiably suspected of state treason”.

Andriy Lokhmatov, writing for Prestupnosti.net, demolishes the ‘evidence’ presented by the prosecution.  He points out that it basically confirms only that Zakharchuk had the technology one might expect a journalist to have, that he works as a journalist in general and that while in Ukraine he was taking photographs.  The one fact with marginally more substance is only incriminating at first glance.  A photograph similar to one found on Zakharchuk’s equipment was used in an overtly propaganda-filled article on FAN about Kharkiv supporters of the Kremlin-backed militants in Donbas. There is no evidence that Zakharchuk had any input in that article or, in fact, any material which was overtly anti-Ukrainian.  The article in question was signed by somebody called Sergei Bendin who was interviewing a person in Moscow.

This is the second arrest of a journalist.  In the case of Ruslan Kotsaba, his behaviour and utterances were viewed by very many people as being against Ukraine, with some observers therefore believing that the SBU might have other evidence to justify his detention.  There was however concern then about the measures taken, especially since they had followed a video in which he was expressing his opinion, no more, on the subject of mobilization.

The arrest and detention of Andrei Zakharchuk are simply incomprehensible and a very worrying development.  Russia may be following in the Soviet traditions of trying people for ‘anti-Soviet agitation and propaganda”.  Ukraine has taken a different path and even in the face of open Russian aggression,  cannot try journalists for ‘state treason’.