Bad Start to Crucial Odessa May 2 TrialsRussia’s New Odessa FileOdesa "Massacre" Propaganda vs. the FactsDangerous silence over police role in Odessa May 2 eventsWithout Double StandardsWhat Russian TV won’t show about the events in OdessaCVU: Pro-Russian activists sold information about pro-Ukrainian activists in OdessaUHHRU condemns police role in Odessa tragedyPropaganda that KillsFake Odessa ‘mass riots’ staged for Russian TVContinuing Obstruction of Odessa May 2 InvestigationMore Evidence against Incendiary Lies about Odesa 2 MayOdesa May 2 Investigation: A Failed Test for Ukrainian JusticeRussia Today, or why Odesa May 2 is different from BaltimoreMovement at last on Odesa 2 May investigationVital Probe of Odesa May 2 Tragedy stymied because of questions answered?Finding the real culprits of the events in Odesa on May 2, 2014Russia kills at least 240 Ukrainian children, forcibly deports thousands of others ‘I saw fire arrows flying from Kherson...’‘... I sang in the basement to calm my daughter down’
• Topics / The right to life
• Topics / The right to a fair trial 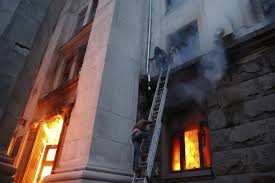 Whatever the reasons for delays and flaws in investigating and prosecuting crimes related to the disturbances, fire and deaths on May 2, 2014 in Odessa, procrastination serves only the interests of Russian propaganda’s ‘massacre’ claims

Forty-eight people died in Odessa on May 2, 2014 during disturbances in the city and as the result of a fire in the Trade Union building on Kulikovo Pole.  Full clarity about what happened and accountability are vital, both for the sake of the victims and their families and because Russian propaganda is relentlessly distorting the facts to present a terrible tragedy as a ‘massacre’.  Yet almost 10 months after the events, the investigation into the fire is still far from complete, and the trial that had begun over the earlier disturbances has been delayed due to significant irregularities and most of the defendants facing dangerously vague charges.

When police snipers were deployed on Maidan in Kyiv in February 2014, resulting in the deaths of around 100 mostly unarmed protesters, there was a large media presence showing the harrowing images. In contrast, the events in Odessa on May 2 were largely learned about after the fire in which most of the 48 victims died.  Russian propaganda channels immediately began spinning and have ever since pushed claims of a ‘massacre’ with anti-Maidan activists allegedly ‘burned alive’ or murdered as they tried to escape.  The same channels talk less about the earlier disturbances but claim that these were the work of ‘Right Sector’ and other far right ‘radicals’.  Considerable resources have been poured into efforts to push the ‘massacre’ line, including organization of an ‘exhibition’ taken around European cities, along with carefully selected ‘witnesses’.

The propaganda version of events has been refuted by the United Nations Monitoring Mission in Ukraine and by the May 2 Group, a journalist and civic initiative that includes representatives of both sides, which has been investigating the events and the copious video footage available (detailed examples here).

However, the propaganda narrative continues to be fuelled by the ongoing failure to complete the investigation into the events of May 2 and to bring to justice those whose actions or negligence caused deaths that day.

For chronological reasons, and since most of the new developments concern a trial over the disturbances earlier in the day, we begin with those.  Worth noting, however, that far more people died as a result of the later fire.  Given that most of the deaths could have been averted had the fire service not taken 45 minutes to appear, the failure to address this is deeply disturbing.

Prosecutions over disturbances in the centre

There is ample evidence, confirmed by the UN monitoring mission, that the trouble was started by pro-federalism [otherwise reported as pro-Russian or anti-Maidan] activists who attacked a peaceful march in support of Ukrainian unity.  As the march had been scheduled in advance of a football match, there were many fans, but also Right Sector nationalists and a large number of ordinary citizens, many with children.  Six people died of gunshot wounds.

On Nov 27, 2014, the trial began of 21 pro-federalist activists on charges relating to the disturbances, though not to the deaths. On Feb 2, following an application from the defence, the Malinovsky District Court in Odessa sent the indictment back to the prosecutor due to what were called infringements of procedural legislation.

The May 2 Group had pointed to numerous issues with this trial from the outset.  There is serious evidence against only one defendant – Serhiy Dolzhenkov – who is alleged to have organized and led the attack on the pro-Ukrainian unity march. There seems to be no real evidence against the other defendants, many of whom remain in custody.  The same formulation is used in the charges against each of them, with no specific charges against any individual. All are said to have: “taken an active part in mass disturbances, namely throwing stones, sticks and other items at people in order to cause damage to life and health, and resisted police officers”.

As one commentator notes, this is a charge that could apply to most of the four thousand or so people involved, whether pro-federalist or pro-unity.  Members of the May 2 Group believe that most of the defendants have ended up facing charges by chance, perhaps for no other reason than that they ran slower and didn’t manage to get away.  It is also worrying that prosecution documents were passed to the court on Jan 29 regarding a pro-federalist demonstrator named only as Alexander P.  The other defendants’ lawyers believe that the charges against their clients are based on this person’s testimony.  They point out that he has two prior convictions, is a drug addict and is currently in detention, making it likely, they suggest, that pressure or incitement was used to induce him to give evidence against those on trial.

Ukraine’s justice system has been seriously compromised over recent years and it would not be the first time that police resorted to such methods in order to obtain ‘evidence’ and ultimately, convictions.

All cases linked with the events on May 2 are, however, of enormous importance both within Odessa and beyond, and it is vital that they are tried in a fair and transparent manner.  For this reason, the decision by the panel of judges to send the case back to the prosecutor for rectification of procedural irregularities is probably to be welcomed, although it arouses concern, given that 10 men at present remain in detention and a further 11, under house arrest.

Botsman (Vitaly Budko) is believed to have been one of the main initiators of the trouble, and he can be seen, for example, in the video clips below, brandishing a shortened version of a Kalashnikov rifle.  The May 2 Group has recently published more evidence which they believe confirms that he was using real firearms.

Botsman is in hiding, as is the ex-deputy head of the Odessa Police, Dmytro Fuchedzhy.  Witness testimony suggests possible collusion between Botsman and Fuchedzhy, with the latter possibly having helped Botsman to escape the scene.

Since Botsman has been identified on video footage as one of the pro-federalists using police shields as cover while shooting at pro-unity activists, any such collusion is highly incriminating.

On Dec 13, 2014 two police officers were found guilty of having sold pro-federalist activists 200 bullets for a Makarov pistol and three bulletproof vests, all for 10, 000 UAH [a significant amount for most Ukrainians].  They received four-year suspended sentences.

Since the new head of the regional police Ivan Katerynchuk had reported that the two men were part of two criminal gangs supplying ammunition to participants in the disturbances, it is disturbing that this was nowhere mentioned by the court.  Even without the tragic consequences on May 2, there can be no question that the officers did not know that they were selling means to kill and maim.

Despite these cases, the May 2 Group has stressed that it does not believe that the police as a whole were involved in any plot and that many officers behaved properly.

This Euromaidan activist is suspected of shooting at people on Grecheskaya Square on May 2.  A police source told the news outlet Dumskaya in late January that the investigation was almost complete, and that there was evidence of Khodiyak’s involvement in the death of at least one person (Yevhen Losynksy) and in an attempt to kill a police officer. As reported earlier, he had been accused of injuring 6 people, one fatally, using a hunting rifle (that does not appear to have been found).  He was placed under house arrest for two months in May, but since this can only be extended twice, is currently at liberty.  While the same applies to the 11 pro-federalist defendants whose charges have just been sent back to the prosecutor, 10 pro-federalist defendants remain in custody although accused of lesser offences.

One of the images constantly used in Russian propaganda is that of a EuroMaidan supporter generally referred to only as Mykola shooting from a pistol at the Trade Union building.  Needless to say, the same propaganda never mentions the pro-federalists from within the building and the roof shooting at the people outside.

The image is effective but misleading.  Alexander Marushevsky, adviser to the head of the regional police, examined Volkov’s pistol at the time and ascertained that it was, as Volkov asserted, a shock pistol using rubber bullets.  Serhiy Dibrov from Dumskaya and the May 2 Group is also adamant that Volkov, who was standing only a metre or so away from him, was using a shock pistol.  The Group established that he had been shooting at the windows on the third floor from where activists were being shot at.

Mykola Volkov died of tuberculosis on Sunday, Feb 15. According to Dibrov he had not been arrested largely because, despite his use in propaganda images, there really was nothing to charge him with, aside from the loose ‘participation in disturbances’.

The fire in Trade Union House

Most of the questions linked with the fire remain unanswered. The investigation is still continuing into the cases where people were shot at, with at least one pro-unity protester (identified as Mykola) having been filmed shooting at the building, and ample video footage and witness testimony, including from those injured, confirming that shots were fired from the third floor and from the roof of the Trade Union building.

The police have lodged a criminal investigation over negligence against the officials from the emergency services who took almost an hour to come to Kulikovo Pole despite numerous calls, including from people inside the building. In December relatives of some of those who died filed a complaint with the prosecutor over this same negligence.

It remains unclear why there were so many people inside the Trade Union building.  It is evident from the comments made by Serhiy Dibrov, a Dumskaya journalist who was streaming from outside the building, that those outside had no idea how many people were inside.

However many people were trapped, there can be no excuse for the failure of the emergency services to come sooner.  That delay cost lives, and it is frustrating that even that investigation does not appear to be going anywhere.

There are periodically claims from the pro-Ukrainian voices that Russia was behind the tragedy. The first such accusation was heard on May 3, the latest in January.  No hard evidence is provided.  Russian attempts to present the events as a ‘massacre’ are relentless and lavishly funded, although just as lacking in evidence.

This is not an investigation that can be put on hold for years, with the odd scrap of ‘progress’ pulled out to silence critics as each anniversary approaches.  The appointment of a new Prosecutor General of Ukraine last week was presented as an achievement in moving forward on investigations over crimes against EuroMaidan activists.  His attention to the events of May 2 in Odessa is just as urgently needed.