Russia’s Ilovaisk TreacheryThe Russian Invasion and Deaths Putin didn’t mentionRussian NGO has list of 400 killed or wounded Russian soldiersIf Russia is not at war, then who is in those freshly-dug graves?Macabre Convoy: Cargo 200 from Ukraine to RussiaInvasion by any other nameHalf-empty or half-emptied?Poland knows about Russian ‘humanitarian convoys’. It didn’t let one in.Stand up to Putin: buy Polish apples!No Sanctions Game Changer?Will the West sleep through this final wake-up call?Russian LifeNews inadvertently told the truth about downed Malaysian airlineMilitants accused of deliberately shooting at Severodonetsk residential areaSent to be shotThe EU’s Opaque Dealings with UkraineWhose anti-Semitic and Homophobic Choice?What should they talk about, Mr Putin?The Peace that chokes RussiaEU’s Clear and Consistent Capitulation?Russian tanks and Ukrainian orphans in Moscow’s unabated offensive
• Topics / Politics and human rights 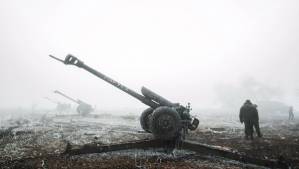 As a major part of Debaltseve was taken by Russian or Russian-armed troops on Tuesday evening, the UN Security Council passed another ‘resolution’ on Ukraine.  These words of “deep concern” and calls for compliance with the Minsk II agreement were reportedly initiated by Russia.  The international media has also widely quoted Russian President Vladimir Putin’s “call on pro-Russian separatists to allow Ukrainian troops safe passage”.   The last time he pulled that propaganda stunt, several hundred soldiers were ambushed and killed.

Putin was speaking, appropriately enough, from Budapest – the city where, in 1994, Ukraine agreed to give up the third largest nuclear arsenal in the world in exchange for guarantees of respect for its sovereignty and territorial integrity.  These guarantees have been broken by Russia and ignored by the other signatories – the USA and UK -  who were among the many expressing “deep concern” and indignation on Tuesday evening.

The OSCE’s Chief Monitor, Ambassador Ertugrul Apakan was also “profoundly disturbed” and called on “the sides to confirm to each other their adherence to the ceasefire”.  He also – quite rightly – expressed concern about the civilian population.

The Kremlin’s proxies in Donbas, including the head of the so-called ‘Donetsk people’s republic’ Alexander Zakharchenko and one of the chief commanders stated shortly after the officially agreed start of the ceasefire that the militants would not be observing it in Debaltseve.  The following statement will, we hope, one day be presented as evidence before the International Criminal Court in the Hague:  "Of course we can open fire, " Eduardo Basurin, a senior rebel commander of forces near Debaltseve, told Reuters. "It’s our territory. The territory is internal: ours. And internal is internal."

Pastor Sergey Kosyak who has tirelessly worked to get aid to people in the zone of conflict wrote on Tuesday that they are constantly phoned by relatives of people stranded in the town, including the family of a woman who was injured when her home was hit by a missile and who is now, without food, hiding out in basements of empty apartment blocks.  “This is the sixth day that there has been no passage into the town, no deliveries of food, water or medicine”.   The Artemivsk – Debaltseve road is virtually empty, with constant artillery fire from both sides.  A direct mortar hit resulted in a huge fire at the gas station with flames up to 40 metres high and there remains no possibility of evacuating people.  Unlike European leaders, Pastor Sergey “has no illusions” about ‘diplomatic solutions’.  He believes that there is no choice but to fight and conquer:“you can’t make an agreement with Satan”.

The militants from the first day of the so-called ‘ceasefire’ refused to allow the OSCE monitoring mission into Debaltseve.  By now it is undoubtedly the case that both sides would need to signal their willingness to observe the ceasefire before the OSCE monitors can enter Debaltseve.  Ukrainian soldiers can be heard in a Reuters report explaining: “We started to respond because it became impossible not to. Yesterday they were shelling and we were silent because there was an order to keep the ceasefire. But it’s impossible, our guys get killed -- that’s some ceasefire for you. So we started to respond today."Having come under heavy fire, were Ukrainian soldiers supposed to remember the Minsk II agreement that Russia and its proxies were flouting and not take up weapons to defend themselves?   This would make for strange compliance, and guarantee that new cities would soon be seized..

Ukraine’s forces are once again trapped and defenceless against Russia’s undoubted military superiority.  Much has been made of the fact that western governments have in recent days openly spoken of Russian military forces and equipment being deployed.   In fact, however, NATO and the USA, then later Amnesty International, presented proof of direct Russian military engagement first in late August.

The sense of déjà vu is particularly bitter given the reports in all international news agencies of Putin’s “call” on his proxies in Donbas to provide a corridor.

In the early hours of Aug 29 an ‘Appeal to the insurgents of Novorossiya’ appeared on Russian President Vladimir Putin’s official website.  This called on “the insurgents” to create a humanitarian corridor for the surrounded Ukrainian soldiers, and allow them to “be reunited with their families, return them to their mothers, wives and children”.

Thousands of soldiers are reported to be trapped in Debaltseve and there are ever less grounds for believing in any of the assurances - whether of safe passage, or of deep concern.