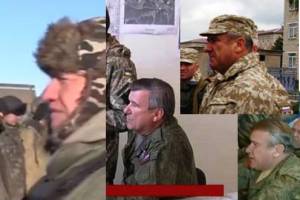 The main, but not only, question in the text here may two days later have been answered by Nastya Sanko, a Ukrainian journalist who believes that the man identified not only by Ukrainian and Russian media, but even by Ukraine's Security Service as the deputy head of Russia's armed forces, Lieutenant General Alexander Lentsov could not be the man on the video of Kremlin-backed militants outside Debaltseve.

With western leaders continuing to bleat their calls for observance of the moribund Minsk II agreement, Moscow had appeared to discard all pretence, with military equipment and men fairly openly brought across the rebel-controlled border from Russia.  In fact, however, the media scandal described below has probably been refuted by Hromadske.TV journalist Nastya Sanko.  She agrees that the man on a video outside Debaltseve posted on Feb 17 looks like Lieutenant General Alexander Lentsov, but says that the voices are different, and that she knows him to have been in a different place on the relevant day. .

Russia’s Novaya Gazeta journalists were among many who thought they  recognized Lentsov on the video, standing next to Vitaly Kiselyov who is named as deputy commander of the ‘People’s police of the Luhansk people’s republic’.  Kiselyov describes Ukrainian soldiers near Debaltseve having surrendered.  The newspaper notes that throughout the video Kiselyov keeps glancing at the unnamed older man next to him, as though checking that he isn’t saying anything he shouldn’t.

This mystery man towards the end takes the initiative saying that it was he who took part in negotiations:

“I persuaded them to surrender so that there wasn’t any bloodshed and in the name of our command guaranteed their lives.  The day before yesterday they deceived us. We met in the same way, reached agreement, and then as soon as our delegation left, there was an artillery strike, we sustained losses, people wounded and killed”.

And if that were not enough to convince the viewer of Ukrainian treachery and brutality, he claims that in neighbouring Chornukhyne the Ukrainian soldiers have become “bestial”:

“They tied local residents to the fence with barbed wire, not letting them hit out at the enemy. They’ve poisoned all the wells, drowning everything in diesel oil.”

The ‘LNR’ militants were approached by Novaya journalists and asked to identify the man speaking.  They replied that they “had only succeeded in finding out his nom de guerre – Eustace”.  The newspaper calls on ‘Eustace’ and members of the public to come forward.

On Feb 18 Lentsov issued a video in which he says that he “was told to issue a denial”.  He proceeded to do so and not overly convincingly, although it seems now that he probably was telling the truth.

Lentsov was reported to be in Donbas, albeit in a very different capacity from the beginning of October 2014.  OSCE names him the Russian head of the Joint Centre for Control and Co-ordination, while the ATO and Crimea centre explained that he was the head of the Russian group responsible, under the Minsk agreement, for demarcating the neutral zone as well as observing and reporting ceasefire violations.  A Russian report on Dec 10 wrongly stated that the delegation had just arrived, but explained that “a group of high-ranking Russian military personnel have been sent to Ukraine to help both sides in de-escalation: these actions have been agreed with Ukrainian military headquarters”.

Lentsov was identified as both the deputy commander of the Russian Ground Forces and as the head of this “mission”.  The Russian specialists were supposed to help “the parties to the conflict in the South-East of Ukraine to reach compromise on de-escalation of tension and withdrawal of forces”.

Stanko says that she spoke with Lentsov in Soledar on Feb 16, and that she knows he was at a joint working meeting with members of OSCE and Ukrainian General Rozmaznin on Feb 17.  She notes also that on Feb 18 Lentsov set off alone for Donetsk, even though she was assured two days earlier that Russian military are always accompanied by Ukrainians.

The Internet is flowing with evidence of Russian soldiers fighting in Donbas, and specifically in the battle to take control over Debaltseve which continued after the Minsk II ‘ceasefire’ was supposed to have taken force.    This is just one of numerous photos showing soldiers wearing Russian armed forces insignia.  There are also more and more reports from Russia of Russians being coerced into fighting in Ukraine.

On Wednesday, the UK Foreign and Commonwealth Office issued “Further proof of Russian military involvement in Ukraine”.  It follows numerous reports from the OSCE monitoring mission, NATO and the US State Department confirming both the deployment of military personnel and equipment.

Western countries are thus recording Russia’s violation both of the agreements reached in Minsk and of the most fundamental principles of international law.  With neither Russia, nor western countries even bothering to conceal Russian aggression, continued calls for observance of an agreement so flagrantly breached are at best stalling for time.  At worst they provide evidence that there is no red line that cannot be crossed.