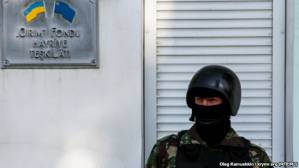 Having tried and failed to cower Crimean Tatar leaders into submission, the Crimean puppet government installed after Russian soldiers seized control last February is now attempting to replace elected members of the Crimean Tatar Mejlis and Qurultay with ‘reliable people’.

The methods are not new – there are always people who can be enticed or pressured into collaborating with an occupation regime, some perhaps who even genuinely support it.

The other means applied also have disturbingly Soviet antecedents.  Refat Chubarov, head of the Mejlis, or Crimean Tatar representative assembly, was banned from entering his homeland at the beginning of July, 2014, and is now forced to lead the Mejlis from mainland Ukraine.  The deputy – and, because of this ban, the acting – head of the Mejlis, Akhtem Chiygoz has been arrested and is in detention in Crimea on preposterous charges laid under Russian law although pertaining to a demonstration held before Russia invaded and annexed Crimea.

Under these circumstances, the occupation regime was clearly hoping to be able to slip their man in as head of the Mejlis.  This person, Remsi Ilyasov, is currently deputy speaker of the Crimean parliament.  Other ‘malleable’ Crimean Tatars would also receive posts in an attempt to seize control of the Mejlis and Qurultay.

Refat Chubarov has issued a statement as head of the Mejlis in which he spells out both the aims and the methods being applied by the Russian occupation authorities.

Chubarov lists the abductions, murders, arrests and trials, the bans or deportation of Mustafa Dzhemiliev, himself, Ismet Yuksel and Sinaver Kadyrov, the offensive against the Mejlis, and other measures which are “aimed at establishing a state of total terror and despair in Crimea, and total submission from the Crimean public to the lawlessness and arbitrary rule imposed by the authorities.”

Chubarov goes on to explain that since the occupation regime is aware of the particular role and enormous authority enjoyed, both among Crimean Tatars and abroad, by the Mejlis and Qurultay and is therefore trying to ‘reformat’ it and change its leadership.  He mentions a small number of Crimean Tatars whose expulsion from the Mejlis was first announced in September after the Mejlis responded to ongoing repression by recalling representatives holding public office within the occupation authorities and calling on Crimean Tatars to boycott the so-called elections on Sept. 14.  As well as Ilyasov, he names Zaur Smirnov and Teifuk Gafarov, as well as Ruslan Balbek, now officially a deputy head of Crimea.  He says that over recent weeks they, and some others close to them, on the direct instructions of their bosses – Sergei Aksyonov and his deputies, “have been resorting to various forms of pressure on members of the Mejlis of the Crimean Tatar people and delegates of the Qurultay, including direct blackmail in order to persuade them to call a meeting of the Mejlis and pass decisions prepared by the occupiers.”

These ‘decisions’ would include the ‘appointment’ of Remi Ilyasov as head of the Mejlis and adoption of a special statement to the international community regarding “recognition of Russian sovereignty over Crimea”.

Chubarov points out that any decisions regarding the makeup of the Mejlis are made solely by the Qurultay which comprises 248 elected delegates.  Attempts to bypass would have no legally standing.

Efforts have been made, presumably to test the water, in Feodosiya, with the pro-regime movement Kyyrym, led by Remzi Ilyasov, trying to change the leaders of the regional Mejlis.  Some indication of the validity of this change can be seen in the fact that it was learned about from the Kyyrym’s Facebook page, which even named ‘the new head’.

The Qurultay Central Election Commission pointed to flagrant infringements in the procedure for such elections and said that they will not recognize the supposed result.

It is worryingly likely that this will not be the last attempt.  A member of the Mejlis who asked not to be named told Radio Svoboda’s Crimean Service that after failing to change the makeup of the central Mejlis, Kyyrym is now trying to achieve this via regional Mejlis. “Various methods are used: intimidation, being summoned for integration, and so forth. The main message – you have to support the regime”.

The list of methods used to cower and intimidate Crimean Tatars and all those opposed to Russian rule is long and has formed the content of many of the reports here since Russian annexation in March 2014.  As the first anniversary of those events approaches, the situation for Crimea’s indigenous people is ever more tragic.