Day of Ukrainian Unity and Remembrance for the First Maidan VictimsMustafa Dzhemiliev: The sacrifice was not in vainIn Remembrance of those who died on MaidanEver more victims of sniper fireBlood and Berkut Sniper Bullets on the President’s HandsMustafa Dzhemiliev on Maidan: I’m proud of you, dear fellow UkrainiansBerkut snipers aimed at protestersWaiting for more bloodshed?Open threats and covert plans as ‘hostage law’ deadline nearsRuling majority takes hostages through new “amnesty law”Ruling party absolves Berkut of liability for Nov 30Ukraine’s ruling majority slips in dangerously repressive lawTraffic police deployed against EuroMaidan protestersTraffic police prevent Euromaidan protesters reaching KyivEuromaidan: Lviv universities come out in support of student protest“The government has made its choice, now it’s our turn”UCU: The Fate of 46 million Ukrainians is at stakeEU Association supporters gathering in protest at government’s about-face on EuropeGovernment abandons preparation for EU-Ukraine Association AgreementVerkhovna Rada rejects all Tymoshenko bills
• Topics / We remember

Arrests in Moscow for those honouring Maidan’s slain heroes 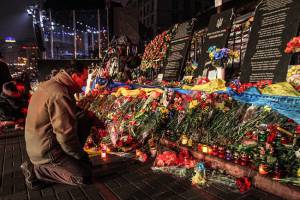 While thousands gathered on Maidan in Kyiv in memory of over 100 EuroMaidan protesters gunned down by police snipers a year ago, eight Muscovites were detained by police while trying to lay flowers outside the Ukrainian embassy.  Five women  – Irina Kalmykova, Maria Ryabikova, Yelena Zakharova, Yekaterina Maldon and Alexandra Makarova – are spending the night in the police station and face administrative charges (of ‘disobeying a police officer’s legitimate order’) with sentences likely of 15 days imprisonment.   At least one of them – Maldon – has already received administrative sentences recently and could become the fourth person to face criminal charges if she has already had three administrative sentences in the last 6 months  Three men also detained – Viktor Kapitonov, Pavel Kuznetsov and Rustam Mustafin were released, the latter two without protocols being drawn up.

‘Disobeying a police officer’ is a standard charge used against protesters.  In this case it is especially inappropriate, firstly because there was no protest, only the wish to lay flowers in memory of Nebesna Sotnya or the Heavenly Hundred – those killed on Maidan. The eight were stopped by a barrier and asked the police present why they could not reach the embassy to leave their flowers.  That was when the detentions began, the human rights monitor OVDinfo reports.  It adds that according to one witness, Anna Frolova, there were around 40 opponents of Maidan present and the police did not touch them.

Over 100 people died on Maidan, most unarmed and gunned down by snipers who aimed to kill.  Even after the hatred deliberately stirred up in the Russian media over the last year, it is profoundly disturbing to think of people turning up for an anti-Maidan demonstration on this most terrible anniversary. 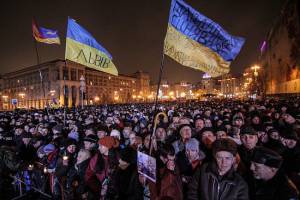 The largest remembrance gathering, attended by the families of those killed, was of course in Kyiv, but people gathered also in many other cities.

See also: In Remembrance of Those who died on Maidan