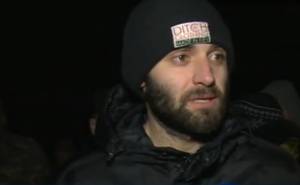 Andriy Zakharchuk, the Ukrainian journalist charged most controversially with ‘state treason’ over his work for Russian media has been freed in exchange for Ukrainian prisoners of war held by Kremlin-backed militants in Donbas.  While the release of 139 Ukrainian soldiers was wonderful news, Zakharchuk’s inclusion in the deal is not only questionable, but also an unfortunate propaganda coup for Russia.

This exchange does not mean that the charges against the 25-year-old journalist have been withdrawn and he is likely to be placed on the wanted list, meaning that he will not be able to return to Ukraine.  Since one bitter young Ukrainian is likely to end up seeking asylum in Russia and effectively exiled from his native Dnipropetrovsk oblast where his family lives, it is worth scrutinizing the ‘case’.

As reported, Zakharchuk had been remanded in custody in Mykolaiv on Feb 12 following his arrest two days earlier by the SBU [Security Service]. The SBU appear to have accused a journalist of doing what journalists do, in this case taking photos of the Inhulsky and some pedestrian bridges as well as of a shipbuilding factory and the Mykolaiv armoured tank factory which are part of the state defence industry.

If the SBU had more grounds for accusing Zakharchuk of ‘state treason’, they weren’t letting on.

Judging by the prosecutor’s report to the court, presumably in support of their application for Zakharchuk’s detention, confirmation found in correspondence that Zakharchuk works for a Russian news agency was deemed incriminating.

There is nothing in Ukraine’s Constitution or legislation which prohibits a person from working for foreign media.  The prosecutor cited the Jan 27 parliamentary resolution which declared Russia to be an aggressor state as well as Article 65 of the Constitution on citizens’ duty to defend Ukraine in accusing Zakharchuk of helping Russia carry out subversive activities against Ukraine.  He allegedly “passed on photographic material for dishonest coverage of events in Ukraine and inciting separatist moods in Ukraine.  The said information agencies are propaganda vehicles, that is, they cover events in Ukraine by distorting facts and providing false information.”

The most specific the prosecutor got was the claim that Zakharchuk had been passing on photos of the armoured tank factory to a Russian news agency “for the purpose of propaganda-filled and anti-Ukraine coverage of events in Ukraine, the anti-terrorist operation, including the technical state of the Ukrainian defence complex and the possibilities for countering illegal armed formations in the East of Ukraine, thus posing a threat to Ukraine’s national security in the information and military spheres”.  The prosecutor claimed that this warranted charges of ‘state treason’.

Zakharchuk’s father Vasyl says that his son had been sent to Ukraine to gather information about how people are living in the South-East of Ukraine.  The one article he had managed to write – about Odessa – was reported to be in no way political propaganda.

There are plenty of people working for Russian media who lie and distort information about Ukraine on a daily basis. This does not seem to have been the case with Zakharchuk who usually writes about sports or society in St. Petersburg (as can be checked easily enough). A photograph similar to one found on Zakharchuk’s equipment was used in an overtly propaganda-filled article on FAN about Kharkiv supporters of the Kremlin-backed militants in Donbas. There is no evidence that Zakharchuk had any input in that article or, in fact, any material which was overtly anti-Ukrainian.

The Mykolaiv publication Prestupnosti.net reports that Zakharchuk’s news agency Nevskie novosti is part of the business empire of Yevgeny Prigozhin.  The latter has been dubbed Russian President Vladimir Putin’s ‘personal cook’ and is believed to have created ‘an army’ of Internet trolls whom the Kremlin uses for propaganda.

It was Zakharchuk who was arrested, not Prigozhin.

Thus even if we accept, which many would not, that providing material for use in Russian propaganda and warmongering, can constitute ‘treason’, there is nothing to suggest that Zakharchuk was actually guilty of this.  His arrest and now his release have served Russian propaganda and the SBU has only itself to blame.