Remind the World: Crimea is Ukraine! 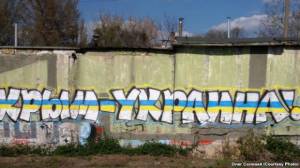 Join in a twitter campaign from now till Feb 28 reminding the world that Crimea was and remains Crimea, and Russian occupation must end.  Remind them also of those banished from their homeland, murdered, arrested, those who have disappeared without trace since Russia’s invasion, and of political prisoners Oleg Sentsov and Oleksandr Kolchenko..

Please post the following on social networks and tweet them (the phrase is first in Ukrainian, then Russian, Crimean Tatar and English).

It is a year since a pro-Russian protest in Crimea which marked the first step in what was soon to be the seizure of government buildings by Russian soldiers and then Russia’s annexation of Crimea, part of Ukraine’s sovereign territory.

A picket was held outside the Russian embassy in Kyiv on Feb 23 to mark both the first anniversary of Russia’s landgrab and the beginning of the public campaign.  Civic activists, people who were forced to flee Crimea, members of the public held placards reading: ‘Putin, Lavrov, Surkov – that’s called intervention, occupation, aggression’ ‘Russian Crimea is a lie”, and others. Photos were posted on the embassy fence demonstrating scenes from Russia’s invasion.  Olga Skrypnyk told Radio Svoboda’s Crimean Service that the exhibition had been put together specifically to demonstrate that Russian had invaded Crimea, and not, as it claims, “re-joined Crimea to Russia as residents wished”.   The government buildings in Simferopol were seized by soldiers without insignia but with machine guns, and it was they who ‘organized’ a meeting of parliament which installed Sergei Aksyonov, leader of a marginal pro-Russian party that had received only 3 percent of the votes in the last elections.

The main demonstration will take place on February 28 on Maidan Nezalezhnosti [Independence Square] in Kyiv.

On Feb 23, 2014, a large demonstration was held in Sevastopol under Russian flags.  At it, Alexei Chaly, a Russian national was declared the new mayor of the city.

A parallel demonstration by Crimean Tatars demanded that the Crimean parliament be dissolved and work begun on passing a new Crimean Constitution. 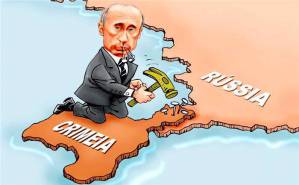 Aksyonov, then leader of the ‘Russian Unity’ party announced that he was creating 10 ‘regiments to protect public order’ and patrol Crimean cities.  These were the prototype of the so-called ‘self-defence’ - armed paramilitary groups in Crimea who are believed to have been responsible for the killing of Reshat Ametov, numerous abductions, disappearances, attacks on opponents of Russian occupation, as well as land and asset seizures.

Some Russians may call this all a ‘Russian Spring’, but for Crimean Tatars and other Ukrainians opposing Russia’s invasion and annexation, it was unmitigated disaster.

Russia was also in direct breach of the 1994 Budapest Memorandum by which Ukraine gave up its substantial nuclear arsenal in exchange for guarantees of territorial security and sovereignty, and international law.

Please help get this heard.