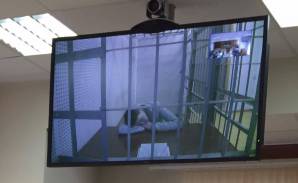 Another former Soviet political prisoner, Viktor Fainberg, has joined Mustafa Dzhemiliev in addressing Nadiya Savchenko as a Russian ‘court’ yet again refuses to release her from custody despite the real danger that she will die in detention. Meanwhile Russian writer Vladimir Voinovych, searingly truthful as ever, has addressed his letter to Vladimir Putin telling him not to appear in any western capital if he lets Savchenko die

On Wednesday a Moscow City Court judge rejected Nadiya Savchenko’’s appeal against her manifestly unwarranted detention.  As well as the flagrant irregularities of this case, and fact that Savchenko has a provable alibi, Judge Andrei Mokhov also ignored clear signs that Savchenko is gravely weakened and may indeed not live to her next hearing.  Now into her 75th day of hunger strike, she could be seen via the video link with her cell either lying down or leaning her head on her arms.

The investigator, in trying to justify extending the detention stated that Savchenko “can use firearms, has training in diversionary sabotage activities and can continue criminal activities”.   This, presumably, on the territory of the Ukrainian embassy which has asked for Savchenko to be released into their care.  She has said that she would in that case end her hunger strike which she insists is an enforced protest against the incompetence of the Investigative Committee.

What words do you use to describe such a supposed ‘appeal hearing’?   Its political nature was seen in the attendance of representatives from the embassies of several EU countries, the USA, and of course Ukraine.

Nadiya Savchenko asked that the trial begin soon since she may not live to the next hearing.  That, unfortunately, seems unlikely since the prosecution has no evidence against her with this, and there are multiple gross irregularities in the case.

Many of these were highlighted during the hearing on Wednesday.  Most importantly one of Savchenko’s lawyers, Mark Feygin, pointed out that a new Article of the Criminal Code  (356 § 1) had been added to the indictment without any new circumstances or evidence presented.  The article in question concerns liability for the use of prohibited means and methods of war, including ill-treatment of POWs or civilians, deportation of civilians, or plundering national property on occupied territory.   There is no clarity even as to what specifically the investigators are alleging that Savchenko is guilty of.

Nor is this the first time that the prosecution has come up with new charges.  As reported, the news that Nadiya Savchenko, who was captured by Kremlin-backed militants in Ukraine and taken against her will to Russia, was now to be charged with ‘illegally crossing the border’ came the morning after a resolution from the Parliamentary Assembly of the Council of Europe [PACE] on Jan 28.  The Assembly demanded that Russia release Savchenko, a Ukrainian MP and PACE member with diplomatic immunity within 24 hours.

Novaya Gazeta reported on Tuesday that their appeal, effectively for mercy, together with just over 11, 500 signatures, had been handed to the President’s Administration.  The response was very clearly demonstrated in the Moscow City Court on Wednesday which rejected the appeal and thus confirmed detention till May 13.

Echoes of the worst Soviet treatment of its political prisoners are gathering by the day.  The poignant appeal from one long-time Soviet political prisoner Mustafa Dzhemiliev to Nadiya Savchenko can be read here.

Now another Soviet dissident 83-year-old Viktor Fainberg, has expressed his concern in a moving letter.  Fainberg now lives in France but was one of the eight people who came out onto Red Square in August 1968 in protest at the Soviet invasion of Czechoslovakia and crushing of the Prague Spring.

Like other former GULAG prisoners, I so deeply feel your desperate struggle alone with an inhuman, deranged system, that in my thoughts and feelings I liken myself to you. Once we were forced to go through this ordeal, and it imprinted itself indelibly on our body and spirit.

We are proud of you, our beautiful, courageous, noble sister in the struggle for inalienable freedom.

I was born in Ukraine, in Kharkiv. The first nature that I saw, the first songs that I heard were the nature and songs of Mother Ukraine. My beloved nanny was called Yekaterina Nikolaevna Savchenko. Like you I also dreamed of being a military pilot. Yet despite excellent marks and enviable health, it wasn’t to be. The implacable “fifth point’ in my passport got in the way [the fifth point was ‘nationality’ - Fainberg is Jewish – HC].

Dear Nadiya!  Today the life and liberty of a heroine of the Ukrainian people should become a priority for all those who have not lost their sense of honour.

I am convinced that Hope, in whose name you were called [Nadiya means hope] will be fulfilled through Victory. For you and Ukraine, which has suffered so much, for my homeland…

With profound admiration and love,

PS  As a sign of brotherly solidarity I am joining you in your hunger strike.  Remembering the past!”

If young Ukrainian heroine Nadiya Savchenko dies of starvation in Russian prison this will not perhaps in any way upset the feelings of your electorate. But you should think about the impression it will make on international public opinion. It is quite likely, and easily foreseeable that public opinion will react to that even more acutely than it has to the annexation of Crimea and war in Donbas. People are made that way, that sometimes the death of one person shakes them more than the death of hundreds on the battlefield.  The attitude to you beyond Russia is already unenviable, but after Savchenko’s death you would be better to stay away from western capitals. Crowds there will meet you with insulting cries and hurl foul-smelling things at you, while Savchenko’s name will be known everywhere.  There will be legends about her, people will write books, make films. Streets and squares will be named after her.

Please don’t shame yourself and Russia yet again and do not let this courageous woman die.

Judging by the absurdity of the charges laid against her, she should simply be released. “