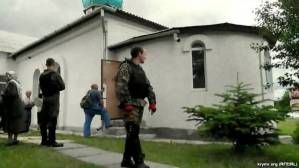 As feared, the demand that religious communities re-register according to Russian legislation is being used as a weapon enabling an effective ban on Ukrainian churches and religious organizations functioning in Crimea.  It is only one of a number of methods used against all but one faith in Russian-occupied Crimea.

Concern that the requirement to re-register would be used in this way was first expressed in Oct. 2014 by the All-Ukrainian Council of Churches and Religious Organizations back on Oct 20.  Now, as the deadline of March 1 (extended from the initial Jan 1) approaches, the Institute for Religious Freedom has sounded the alarm. IRF explains that Article 19 of the relevant Russian law states that legal entities which have not brought their founding documents into line with Russian legislation and have not submitted applications to be added to the Single State Register of Legal Entities as branches of a foreign legal entity by the date stipulated will not be able to operate in Russia (including Russian-occupied Crimea) and will be dissolved.

And if they have applied, but the will is not there to reregister?

According to Alexander Selevko, head of the Department for Religious Affairs and National-Cultural Societies within the Crimean Culture Ministry,   the reregistration process is “proving difficult”, despite the extension of the deadline to March 1.

Vladimir Bobrovsky, authorized Crimean representative of the Russian President, reports that only 9 societies have re-registered, with 73 currently in the process of re-registration.  Only 2 religious organizations have registered in Moscow.

IRF reports that at the beginning of 2014 there were 1, 409 religious organizations registered as legal entities in Crimea, and around 674 religious communities, mainly Crimean Tatar, which functioned without registration.

Russian legislation is more restrictive than Ukrainian with respect to believers, imposing far more onerous demands on bodies wishing to function as a legal entity.  As reported here, one particular point of concern is Russia’s extensive use of dangerously broad ‘anti-extremism’ legislation.  Maksym Vasin, head of IRL pointed out in a comparison of the two countries’ legislation that Ukraine simply does not have such a concept as ‘extremism’ and people face prosecution for specific acts falling within the scope of the Criminal Code.

IRF warns that the loss of legal entity status will have greatest impact on Ukrainian religious communities’ property rights, with them losing the right to use and dispose of their churches, mosques, places of worship or other buildings. They will also be severely restricted since only registered bodies can carry out religious rites in hospitals, kindergartens, homes for the elderly and prisoners; invite foreign nationals to come to work; open bank accounts for donations; buy or rent premises for services and other property; produce and circulate literature, printed, audio or visual material; carry out charitable work; establish and maintain international contacts.

IRF points out that the difficulties with re-registration are clearly aimed at forcing Ukrainians in Crimea to take Russian citizenship and come under the jurisdiction of Russian religious centres.

Use of legislative demands for re-registration are among various means using against all religious faiths in Crimea, bar one – the Orthodox Church under the Moscow Patriarchate.

In late November the Crimean Human Rights Field Mission held a joint press conference with representatives of the Ukrainian Greek Catholic Church; the Ukrainian Orthodox Church under the Kyiv Patriarchate; the Spiritual Directorate of Muslims of Ukraine and a number of Protestant communities.  All had tales to tell since Russia’s annexation of Crimea of discrimination; attempts to discredit them; destruction of their property; summonses for questioning and other forms of pressure and intimidation,

Several Kyiv Patriarchate Orthodox priests have been forced to leave the Crimea and the majority have been summoned to the FSB for questioning.

Kyiv Patriarchate churches have been shut down in Sevastopol; Krasnoperekopsk; Kerch, as well as in the village of Perevalne, which was subjected to an armed attack in June.

In June Pastor Ruslan Zuyev from the Salvation Army left the Crimea after being the object of overt harassment by the Simferopol FSB. He says that they began phoning and then turned up at his office asking strange questions. His wife and daughter had also received threats.

Rabbi Misha Kapustin left Simferopol following threats over his opposition to Russia’s occupation of the Crimea.  Russian propaganda was subsequently caught out faking material in order to suggest that he had fled Ukraine out of fear of the supposed ‘fascist Kyiv junta’.

Crimean Muslims have suffered most from abuse of Russia’s law on extremism, as well as its enormous list of prohibited literature. Anti-extremism legislation has been cited and used without any justification since the peaceful protests against the ban on veteran Crimean Tatar leader Mustafa Dzhemiliev returning to his homeland, and especially in the offensive against the Mejlis or representative body of the Crimean Tatar People.  There have been frequent armed searches of homes, mosques and religious schools with the claim being that they are looking for ‘arms, narcotics and extremist literature’

According to the latest Crimean Field Mission report, in January there were only 9 Kyiv Patriarchate Orthodox Church parishes left in Crimea, against 14 a year earlier.

Particular concern is expressed about the position of supporters of the Hizb-ul-Takhrir movement which was always legal in Ukraine, but is one of the numerous organizations which Russia considers ‘terrorist’.   Three people – Ruslan Zeitullayev; Nuri Primov; and Rustem Vaitov were arrested by the FSB on Jan 23, and are now in custody. They are charged with organizing and taking part in an organization which until Russia invaded and annexed Crimea was totally legal, yet one could face from 15 to 20 years imprisonment, the other two – from 5 to 10 years.  The men’s relatives and friends are adamant that the men were not involved in any terrorist activities and are followers of Islam.

A recently adopted ‘comprehensive plan’ for countering the ideology of terrorism, names those whom the occupation regime, following Russia, believes need to be ‘identified’ and “persuaded to renounce their unlawful and destructive ways, repent and take part in prophylactic measures”.  The list includes “active members and ideologues of non-traditional religious organizations and sects functioning in Crimea.”

That document, like other legislative measures and practice, give the occupation regime enormous scope for abuse against those whose views or religious beliefs are deemed undesirable.