Boris Nemtsov: Yes, I’m afraid that Putin will kill me 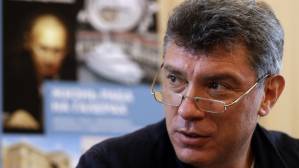 Boris Nemtsov was gunned down in the centre of Moscow tonight, two days before an opposition rally in Moscow that he was co-organizing and 2 weeks after he told a Russian newspaper that, like his mother, he was afraid that Vladimir Putin would have him killed.  His was one of the few public voices of sanity in Russia, unafraid to speak out and even make a film about the war Putin has launched against Ukraine.

Reports say he was shot four times in the back after a number of men got out of a car.   Despite this being very close to the Kremlin with cameras absolutely everywhere, the killer or killers got away.  As with all the other murders of opposition leaders, independent journalists and activists, there will doubtless be international calls for a ‘full investigation’, etc. and somebody may even be arrested and imprisoned.

This is what Boris Nemtsov, now silenced, had to say in an interview on Feb 10 to Sobesednik.ru.

“I have never concealed my political views.  I believe that it was he [Putin] who started the war in Ukraine.  My attitude to him could not be worse.  Especially after Nord-Ost and Beslan”.

Nemtsov spoke of his mother – Dina Yakovlevna Eidman - who in March will be 87.  She lives alone in Nizhny Novgorod but follows what is happening in Russia – and in Ukraine.

“She is categorically against what is happening in Ukraine, she thinks it’s a catastrophe and a total nightmare. However more than Ukraine, she’s worried about Putin. Every time I ring her, she laments: “When will you stop criticizing Putin? He’ll kill you!”  And she really means it.

She naturally has a very bad opinion of Putin – I’m her son, after all, and it was Mama who taught me that you have to uphold your point of view, be independent and think for yourself.  It was she who raised me that way, and now is indignant that I criticize Putin who is trying to take away our freedom.  She is seriously frightened that he could kill me in the near future because of my public statements, both in the outside world and on social networks. And, I repeat, these are not jokes: she’s an intelligent woman.  She’s really afraid of this.”

“And have you, after such conversations with your mother, begun to fear that Putin could kill you in the near future, either himself or via go-betweens?”

“You know, yes… A bit.  Not as strongly as my mother, but still … But nonetheless I’m not so very afraid of him. If I was so very afraid, then I’d hardly have headed an opposition party, have hardly done what I’ve been doing.”

“I hope that common sense will after all prevail and that Putin won’t kill you.”

Boris Nemtsov was one of the few totally decent and consistent politicians in Russia. Where Mikhail Khodorkovsky and Alexei Navalny’s opposition to Putin and his regime failed to extend to Russia’s invasion and annexation of Crimea, Boris Nemtsov remained true to his – and his mother’s – principles and was adamantly opposed to Moscow’s actions both in Crimea and in eastern Ukraine.

He consistently reported all evidence of Russian soldiers and Russian military equipment in Ukraine.  In his last interview, just two hours before he was killed, he suggested a debate with Putin beginning with a simple question:  “Why are Russian soldiers dying and you, as Chief Commander, Mr Putin, deny them, lie and claim that they’re not fighting?  We see the graves of these soldiers – we see them in Kostroma, in Pskov, in Nizhny Novgorod…."

One of his recent Facebook posts about the rally planned for Sunday spoke of Russia’s military expenditure.

Boris Nemtsov was outspoken over Nord Ost and Beslan.  As we know, but most western governments preferred not to say too loudly so as not to annoy Putin, heavy artillery was deployed against a school with well over a thousand hostages, more than half children.  He was also fearlessly honest about the human (and environmental) cost of Putin’s determination to hold the 2014 Winter Olympics in Sochi.  Of the human cost of a regime built on lies and contempt for human life.

There are simply no words to express this loss.