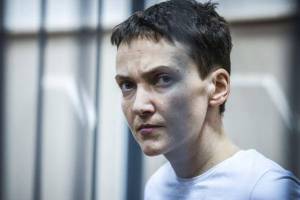 The words below were first posted under a different title, prompted by the proven futility of appealing to humanity from Russia’s leaders. It should nonetheless be recorded that Vladimir Putin is ignoring his own Human Rights Council in risking Nadiya Savchenko’s life

Less than three hours before he was gunned down close to the Kremlin, Boris Nemtsov was asked whether it was possible to put pressure on Russian President Vladimir Putin to release Nadiya Savchenko.  He answered that “the level of sadism, of cruelty towards Nadiya” was spiralling out of control.  “We here in Moscow, in Russia are used to anything, but of course it’s impossible to become used to such behaviour by Putin”

Could people exert influence on Putin?  Yes, but if a million people come out onto the streets.

The planned anti-war rally on March 1 will now be a march in remembrance of Boris Nemtsov.  How many will be there is unclear, though UNIAN’s Moscow correspondent Roman Tsymbalyuk reported that thousands were coming from early morning on Saturday to lay flowers at the place where he was killed.

One column of Sunday’s march will be in support of Nadiya Savchenko, now on hunger strike for 79 days and reportedly planning to refuse even water.  The million voices are unlikely to be present on Moscow streets, but may be heard around the world, as different initiatives call on ordinary citizens to hold demonstrations, vigils and take part in a twitter campaign.

In the wake of Boris Nemtsov’s murder, any upbeat noises feel very hollow.   So too does reporting the appeal for Savchenko’s release from the Russian President’s own Human Rights Council.  This advisory body which Putin himself called into being wrote to the head of the Investigative Committee Alexander Bastyrkin on Feb 27 asking that Savchenko be released from custody and placed under house arrest.  The Council cited the assessment of one of their members, Yelena Masyuk who had visited Nadiya Savchenko on Thursday and found a serious deterioration in her state of health.  Masyuk reported that Savchenko had then been without even glucose injections for 15 days and that there were already serious problems with internal organs.  She could die in the coming days, Masyuk warned the members of the Council.

They have warned Bastyrkin – and Putin.  Their call for her release on the grounds that she will die if not released has been ignored.

Some Russian voices have been more forthright, understanding, as did Nemtsov, that it is quite senseless to appeal to Putin’s humanity.   Vladimir Voinovych, for example, told Putin that if Savchenko dies, he should not risk showing his face in western capitals.

In his last interview Nemtsov spoke of Nadiya Savchenko as a symbol of resistance for Ukraine and of her death, if Russia’s leaders do not prevent it, leaving a legacy of enduring hatred towards Russia.

UNIAN’s Tsymbalyuk wrote in his eulogy to Boris Nemtsov that because of the warmongering and propaganda, it has become mortally dangerous to show support for Ukraine.

Everything has become mortally dangerous.  Whether a million voices from around the world can now save Nadiya Savchenko is unclear, but they are urgently needed as a message not only to Nadiya and to the Kremlin, but to all those who dare to come out on Sunday, March 1 in Moscow.