Odessa May 2 trial turns into farce as Russia continues ‘massacre’ propagandaBad Start to Crucial Odessa May 2 TrialsRussia’s New Odessa FileOdesa "Massacre" Propaganda vs. the FactsDangerous silence over police role in Odessa May 2 eventsWithout Double StandardsWhat Russian TV won’t show about the events in OdessaCVU: Pro-Russian activists sold information about pro-Ukrainian activists in OdessaUHHRU condemns police role in Odessa tragedyFake Odessa ‘mass riots’ staged for Russian TVContinuing Obstruction of Odessa May 2 InvestigationMore Evidence against Incendiary Lies about Odesa 2 MayOdesa May 2 Investigation: A Failed Test for Ukrainian JusticeRussia Today, or why Odesa May 2 is different from BaltimoreMovement at last on Odesa 2 May investigationVital Probe of Odesa May 2 Tragedy stymied because of questions answered?Finding the real culprits of the events in Odesa on May 2, 2014Russia is waging a bloody war against Ukrainian childrenRussia kills at least 240 Ukrainian children, forcibly deports thousands of others ‘I saw fire arrows flying from Kherson...’
• Topics / News from the CIS countries 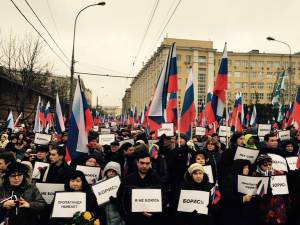 Russia’s pro-Kremlin NTV withdrew its much-advertised broadcast on March 1 of ‘Anatomy of Protest – 3, its latest attack and character assassination of the Russian opposition.  Somebody high up presumably feared an angry response from those tens of thousands of Russians who came out on Sunday to mourn Boris Nemtsov and protest against political terror.  That human decency need not be suspected was amply demonstrated by other coverage from Russia’s propaganda channels and, regrettably, its Investigative Committee.

There has long been close coordination between Russia’s law enforcement bodies and the media, with the second ‘Anatomy of Protest’ film leading in 2012 to the arrest and subsequent imprisonment of opposition leaders.   The ‘versions’ presented by the Investigative Committee [IC] for Nemtsov’s murder, including the most scurrilous, have been lavishly elaborated upon, with the most obvious motive -  to remove the Kremlin’s most vocal opponent and critic of its aggression against Ukraine -  either not mentioned at all, or rubbished.  The huge demonstrations on Sunday were largely mentioned in terms of the number of people detained. 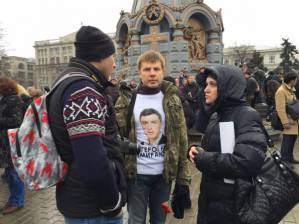 One of the most cynical of these detentions was that of Ukrainian MP Oleksy Honcharenko.  The MP was released around 9 p.m. after many hours in police custody, and is now due in court on Monday on the absolutely standard administrative charge of ‘not obeying the legitimate demands of a police officer’.  He showing any resistance, and says that he was beaten and that his request to call a doctor was ignored.  Earlier in the afternoon he that he had been detained for a Ukrainian message (seemingly: ‘Heroes do not die’) on his T-Shirt.

Little did he know …  appeared a few hours later on the website of the Investigative Committee stating that “Oleksay Honcharenko is being interrogated over crimes against a Russian national during the tragic events in Odessa”.

What could be better than to mix lurid photos of Nemtsov’s Ukrainian companion and wildly implausible ‘versions’ about his murder with a reminder of the Russian ‘massacre’ narrative concerning the disturbances and fire in Odessa on May 2 in which 48 people lost their lives?.  Especially since the IC ‘criminal investigation’, initiated six months later was brought against, among others, unnamed individuals from the constantly demonized ‘Right Sector’.

IC claimed that an innocent Russian bystander had feared for his life and sought refuge in the Trade Union building on Kulikovo Pole which became engulfed in flames.  The wildly varying accounts from the IC and the independent and Odessa-based May 2 Group can be compared in ‘Russia’s New Odessa File’.

It was no accident that Honcharenko was targeted for this performance.  On May 2 last year Honcharenko was still an Odessa regional council deputy who reported on the events that night to Savik Shuster’s talk show.  His words have been grossly misinterpreted ever since.  He did indeed express satisfaction that the anti-Maidan activists’ camp on Kulikovo Pole had been burned down in a counter-offensive following the attack against a peaceful pro-Ukrainian unity march earlier in the afternoon in which 6 people died of gunshot wounds.  It is quite clear from that he is referring only to the burning of the anti-Maidan activists’ tents, and that the fire in the Trade Union building and deaths are viewed as a tragedy.

This is not the impression which Russian TV viewers received.  Having been forced to renounce scurrilous lies about Boris Nemtsov and his opposition colleagues, NTV made up for it with their .

“Several dozen aggressive young people with Ukrainian flags and extremist symbols tried to get through the metal detectors and take part in today’s memorial procession organized in connection with the murder of Boris Nemtsov.  Among the detained was a Ukrainian radical, doubling up as MP, Oleksy Honcharenko. …. This person is considered one of the organizers of the arson attack on the Trade Union Building in Odessa in May last year.

Oleksy Honcharenko was part of the raging mob and threw Molotov cocktails at defenceless people. It was specifically after these foul events that the career of this little-known official took off. “

NTV claims that Honcharenko may now himself face charges.  Life News Honcharenko a “participant in the massacre in the Odessa Trade Union Building”.

There was no massacre, however often Russian propaganda media claim the contrary.  Nor could there be any reason for detaining, still less, charging Honcharenko with involvement in any of the events that day.

This has not, of course, stopped the Investigative Committee who came up with the grotesque charges against Nadiya Savchenko and is now ignoring calls for her release from even Vladimir Putin’s own Presidential Human Rights Council.

Honcharenko’s detention served a different purpose, namely to shift the focus from the questions that should come to mind, even to the most zombified TV viewers in Russia.  Like how the killer could have gunned down a leading Russian opposition politician near the Kremlin, the most closely guarded territory in all of Russia, and got away. And who will be next on the ever growing list of Kremlin opponents who have been gunned down, poisoned or imprisoned.

At the marches this Sunday, many carried placards reading ‘Propaganda kills’.  Moscow’s ‘Odessa 2 May’ narrative has been used over the last year to stir up hatred for Ukrainians and support for Moscow's undeclared war being waged in Donbas.  Even if Putin did not personally give the order, one demonstrator told Radio Svoboda, he is responsible for the hate-driven propaganda and warmongering madness which led to Nemtsov’s murder.  And which the regime is clearly showing it is not about to renounce.