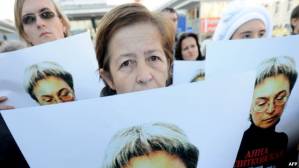 Human rights activists at a rally in honour of slain Russian journalist Anna Politkovskaya in Moscow in 2010.

When Boris Nemtsov was gunned down on a bridge near the Kremlin on February 27, the opposition figure joined a grim list of prominent Russians killed in the Vladimir Putin era.

To be sure, that list didn’t start when Putin first took over the presidency on New Year’s Eve 1999. The 1990s saw a spate of assassinations of politicians, business people, and other high-profile figures, as can be seen here.

But there’s arguably one major difference. While the motives for the killings in the 1990s tended to be more diffuse -- just as the Russian state and political elite were more fragmented -- in the Putin era, they appear to be more straightforwardly directed at critics of the regime.

Here are a few of the prominent, Putin-era cases:

October 18, 2002: Valentin Tsvetkov, the governor of Magadan Oblast in Russia’s Far East, is shot dead by a sniper just blocks from the Kremlin. Tsvetkov, who earned the dubious distinction of becoming the first regional governor assassinated in post-Soviet Russia, had been trying to crack down on crime in his Pacific region’s gold and oil industries.

​April 17, 2003: Sergei Yushenkov, a veteran liberal politician and leader of the anti-Kremlin party Liberal Russia, is shot dead in front of his home in Moscow. At the time of his death, Yushenkov had been at the forefront of efforts by liberal lawmakers to investigate the possible involvement of the Federal Security Service (FSB) in a series of deadly apartment bombings in 1999. The bombings, which killed some 300 people, were blamed on Chechen rebels and used by Moscow as justification for launching its second Chechen war. They also helped catapult Putin to the Kremlin.

July 3, 2003: Yury Shchekochikhin, a liberal lawmaker and investigative journalist,  dies after being struck down by a mysterious illness. Authorities blamed his death on an allergic reaction, but many suspected Shchekochikhin was deliberately poisoned because of his muck-raking reporting into sensitive cases including the 1999 apartment bombings.

June 21, 2004: Nikolai Girenko, one of Russia’s leading experts on racism and xenophobia, is shot dead through the door of his St. Petersburg apartment.

July 9, 2004: Paul Klebnikov, the American editor of Forbes-Russia, is gunned down outside his Moscow office. Klebnikov had written at length about corruption, and Forbes had published a list of Russia’s richest people. In 2013 Klebnikov’s accused killer, Chechen businessman-boxer Kazbek Dukuzov, was among 18 individuals placed on a U.S. visa blacklist under the Magnitsky Act, which aims to punish Russians implicated in rights abuses.

October 7, 2006: Anna Politkovskaya, one of Russia’s most prominent journalists and a dogged chronicler of alleged rights abuses by pro-Moscow forces in Chechnya, is shot dead in her apartment building. In June 2014, two men were sentenced to life and three others to long prison terms for their involvement in Politkovskaya’s murder. But her family said justice would not be done until those who ordered her killing are brought to justice. Politkovskaya was killed on Putin’s birthday, prompting speculation that her murder was meant as a "gift" to the president.

November 23, 2006: Former Soviet security officer-turned-Kremlin critic Aleksandr Litvinenko dies in London after being poisoned with radioactive polonium. Litvinenko had fled to the United Kingdom in 2000 after publicly accusing the FSB leadership of plotting to kill Russian oligarch Boris Berezovsky. He later co-authored a book blaming the FSB for the 1999 apartment bombings. On his death bed, Litvinenko accused Putin of ordering his murder. British authorities said they believed Litvinenko drank tea laced with the poison during a meeting in a London hotel several weeks earlier with two Russians, Andrei Lugovoi and Dmitry Kovtun, whom Moscow has since refused to extradite. At a public inquiry into Litvinenko’s death that opened in January 2015, the lawyer for Litvinenko’s widowcalled the killing "an act of nuclear terrorism on the streets of a major city which put the lives of numerous members of the public at risk."

​January 19, 2009: Leading human rights lawyer Stanislav Markelov is shot dead in broad daylight in central Moscow. Anastasia Baburova, a young reporter who had been interviewing Markelov for the opposition newspaper Novaya Gazeta, is shot as she attempts to protect Markelov and later dies of her injuries in hospital. Markelov was gunned down just minutes after leaving a press conference where he had announced he would continue to fight against the early release from jail of a Russian military officer convicted of killing a young Chechen woman. In April 2011 two nationalists, Nikita Tikhonov and his girlfriend Yevgenia Khasis, were convicted of the killings.

July 16, 2009: The body of Natalya Estemirova is found in Ingushetia, one day after the journalist and human rights activist was abducted in Grozny, capital of the neighboring republic of Chechnya. Estemirova, a board member of the renowned rights group Memorial, had been personally investigating hundreds of cases of rights abuses in Chechnya including kidnapping and murder. Memorial said initial investigation pointed to the possible involvement of local law enforcement officers. Oleg Orlov, the head of Memorial HRC, was sued for defamation after accusing Chechen leader Ramzan Kadyrov of orchestrating Estemirova’s killing, but he was eventually acquitted.

November 16, 2009: Sergei Magnitsky, a whistle-blowing lawyer who had implicated some top Russian officials in a $230 million tax fraud, dies one year after being jailed ahead of a trial on similar charges. A pancreatitis sufferer, Magnitsky was denied medical care in pretrial detention and -- according to the Kremlin’s own human rights council -- was badly beaten before his death. The United States in late 2012 passed the Magnitsky Act, which targets Russians implicated in rights abuses with visa bans and asset freezers. In July 2013 Magnitsky was found guilty of tax evasion in a posthumous trial in Moscow.

April 8, 2013: Mikhail Beketov, a crusading journalist who had reported on large-scale corruption, dies five years after being savagely beaten in his hometown of Khimki near Moscow. Beketov had been left severely brain damaged from the attack, which supporters linked to his work uncovering corruption surrounding the construction of a controversial Moscow-St. Petersburg highway through the Khimki Forest.