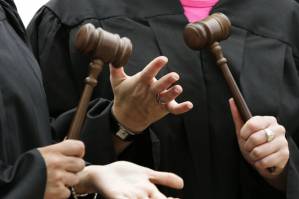 On March 4 the Verkhovna Rada gave consent for the removal of immunity from three Pechersky District Court judges: Viktor Kytsiuk, Serhiy Vovk and Oksana Tsarevych.  All three are well-known for their role in at least one high-profile case during the presidency of Viktor Yanukovych.  Vovk and Tsarevych were both involved in many prosecutions, including that of former Interior Minister Yury Lutsenko.

The three judges are facing charges under Article 375 § 2 of the Criminal Code (the handing down by a judge or judges of a knowingly wrongful ruling, etc.).

The grounds for demanding their detention seem rather questionable since reports in the media have consistently said that at least two of the judges – Kytsiuk and Tsarevych – have been appearing for questioning when summonsed.  Vovk has officially been on paternity leave since Feb 17.  Unlike the other two, he was not in parliament for the vote on Wednesday morning.

The application for consent to the judges’ arrest was lodged by the Prosecutor General’s Office and appears to reflect a new level of activity since Viktor Shokin was appointed Prosecutor General a few weeks ago.

Probably because at least two of the judges have been involved in many cases that were widely considered to be politically motivated, there are conflicting reports as to the specific rulings mentioned in the prosecution material against them.

Kytsiuk and Tsarevych appear to be accused of having issued knowingly wrongful rulings against Automaidan activists during the EuroMaidan protests.

As reported here, after the AutoMaidan car procession on Dec 29, 2014 to Yanukovych’s controversial residence at Mezhyhirya and the sumptuous homes of others in high positions, activists and journalists who took part received visits from traffic police officers, or invitations to come to the police station for a “chat”.  Traffic police protocols, were then used by the court to deprive activists of their licence for 3 or 6 months.  In January 2014, for example, Tsarevych  stripped Ukrainska Pravda journalist Oksana Kovalenko of her license even though Kovalenko’s car could not have been at the place where the alleged administrative offence took place.  The ruling was passed in the absence of either Kovalenko or her lawyer who had asked for it to be deferred due to other commitments.  There were a large number of such rulings handed down by various judges.

It was reported in February that Tsarevych is accusing of having issued wrongful rulings for personal gain. The prosecutor’s office is refusing to provide any details, citing secrecy of the investigation.

Vovk is also accused of passing a knowingly wrong ruling for personal gain when hearing a case involving a property dispute.

The Prosecutor General’s Office has also reported that Vovk is under suspicion over the trial and sentencing of Yury Lutsenko.  Vovk was the presiding judge who sentenced Lutsenko to 4 years imprisonment.

Both Vovk and Tsarevych were involved in the trial of Valery Ivaschenko, former defence minister in Yulya Tymoshenko’s government.

Tsarevych and Kytsiuk were both judges in the particularly scandalous ‘case’ where Tymoshenko, who had already been imprisoned for 7 years, was accused of involvement in the murder 16 years earlier of Eugene Shcherban.

Kytsiuk was also involved in taking land in the centre of Kyiv away from a Kyiv teacher Nina Moskalenko.