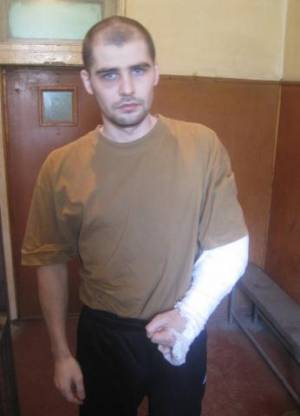 In an open letter, Alexander Kostenko says that he is subjected to constant ill-treatment and threats in order to force him to give testimony against EuroMaidan activists.  As reported, Kostenko was arrested and remanded in custody in early February on charges relating not only to events that took place before Russian soldiers and tanks imposed Russian legislation on Crimea, but not even in Crimea.

The Crimean Human Rights Field Mission reports that Kostenko’s lawyer Dmitry Sotnikov has called on the SIZO [detention centre] administration to carry out an investigation and take the appropriate measures.  He says that not only was Kostenko brought to SIZO with signs that he had been subjected to torture, but he is now facing regular beatings.

Olha Skrypnyk, Deputy Head of the Crimean Field Mission notes the overtly political nature of the Kostenko case.  The fact that the Russian Investigative Committee has initiated a criminal investigation over events which took place in Kyiv is, she adds, in breach of criminal law and the principles of territorial jurisdiction.

Kostenko was arrested in Crimea on February 8 and remanded in custody for 2 months on charges linked with EuroMaidan protests in Kyiv last February before Russia’s invasion of Crimea.

His arrest is not the only recent demonstration of contempt for fundamental principles of rule of law.  The Deputy Head of the Mejlis or Crimean Tatar representative assembly, Akhtem Chyyhoz and another Crimean Tatar activist had just been arrested and detained over  a demonstration the day before Russian soldiers seized control in Crimea on Feb 27,

Kostenko is charged under Article 115 of the Russian Criminal Code of “deliberate infliction of mild damage to health for motives of political, ideological, racial, ethnic or religious hatred or enmity, or hatred or enmity in relation to a social group”.

There is no information about the specific injury the officer from the Crimean Berkut unit is alleged to have incurred. Nor is there any clarity as to how the “investigative body supported by the Crimean Prosecutor’s Office” should have determined that the injury was inflicted deliberately, and presumably “for political or ideological motives”.

There were obvious reasons why the court should have refused to consider any application to detain Kostenko, namely that any alleged action took place in Ukraine and under Ukrainian legislation.  It would have been equally clear to the court that the only ‘evidence’ against Kostenko came from Berkut officers who were heavily implicated in the violent measures deployed against predominantly peaceful EuroMaidan protesters.  The court ignored all of that and Kostenko was remanded in custody for 2 months.   Nor does it seem likely, considering the statements made by the so-called ‘prosecutor’ Natalya Poklonskaya, that Kostenko will be the only person detained in the monstrous travesty of a prosecution now unfolding.