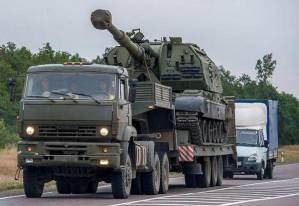 While Europe continues showering Ukraine with expressions of ‘deep concern’, it has just provided a hefty boost to a major Russian producer of the military vehicles being used in Russia’s undeclared war effort in eastern Ukraine. On Feb 24, news of the  European Commission’s approval on Feb 24 for the creation of a joint venture between Germany’s Daimler company and KAMAZ led to shares in the latter company surging in value by 40 %.

The EC decision on Feb 24 was made under the EU Merger Regulation, with the investigation it carried out seemingly focusing on whether there could be any competition concerns.  It decided there could not since the company will be active only in Russia and Belarus.

Ukraine is reported to have issued an official complaint against the decision to allow the merger with KAMAZ which may produce ordinary trucks, but also produces a formidable selection of military vehicles.  Many of the latter have been reported and photographed crossing the border under Kremlin-backed militant control or passing through cities in Donbas.

Russia consistently denies the deployment in Ukraine of KAMAZ military vehicles.  This should be stressed, because such denials demonstrate the worth  – of lack of any substance – to the claims made by the EC that this approval cannot contravene EU sanctions which, it says, apply only to the import and export of weapons and linked products.

Since Russia officially denies transporting weapons, these seem to effectively slip through the sanction net.

No wonder there was buoyancy on the market.

As well as asserting that the EC stamp of approval on a joint company is in breach of EU sanction policy, Ukraine had also argued that the decision would be used by Russian propaganda “to discredit the decisiveness and effectiveness of EU efforts to counter Russia”.

Judging by comments in the Russian media, as well as soaring KAMAZ shares, this is precisely what has happened.  BUSNES Online “experts believe that a signal has been sent in this way from Europe, that KAMAZ will avoid sanctions”.  A spokesperson for the company, Oleg Afanasyev also believes that the company’s new success is due to news of the European Commission’s decision.

In order to get permission, KAMAZ had to get rid of its orders from the Russian Army.  How this is later to be monitored, or indeed if later deals are precluded, is not clear.  BUSNESS Online spoke with financial analyst Anatoly Vakulenko who says that the news can be viewed as a signal that KAMAZ, as part of a joint venture with Daimler, will not incur any EU sanctions, and can therefore hope to receive financing from abroad.  The suggestion is, moreover, that this merger can be viewed as a test shot, opening the way for other forms of economic collaboration between Russian and German companies.

KAMAZ claimed to have sold its last military assets – full ownership of a factory producing armoured Typhoon vehicles back in November 2014.   Afanasyev claimed that this had nothing to do with sanctions, but was because “military technology is a risky and resource-consuming field”.  Unlike Daimler and their friends in the EC, this assertion is viewed with scepticism by the Russian business publication.

“Such an explanation looks extremely strange against the background of a sharp fall in commercial demand for trucks and the stable state military orders which many defence companies in Tatarstan are swimming in.  Seemingly KAMAZ management valued advantage to be gained from “neutral” status higher, and rejection of military money is probably of a semi-formal nature”.

Meanwhile Daimler and the EU are covering themselves by citing formal conditions which are insultingly irrelevant to the situation.

The restrictions on import and export of arms and related materials from Russia may not be formally infringed.  This, however, is only because Russia is not importing them to Ukraine, but taking them illegally across the border for use by Russian soldiers and the Kremlin’s proxies fighting Moscow’s undeclared war in eastern Ukraine.