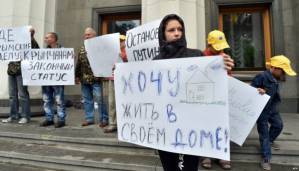 The front placard reads: I want to live in my own home!

Human rights activists have criticized a resolution passed by Ukraine’s Cabinet of Ministers on March 4 as unconstitutional and discriminatory, and say that it likens internally displaced people [IDP] from Crimea and Donbas to criminals.

The resolution requires people who have moved from areas under occupation to constantly confirm their actual place of residence.  Without the relevant stamp from the Migration Service, the IDP document, entitling them to social payments, material assistance, etc., will become invalid.   This, human rights activists say, is reinstating the old system of propiska, or registration.

According to Oleksandra Dvoretska, Coordinator of the civic initiative Vostok SOS, is outraged by the new changes.  According to them, a person who has just obtained IDP papers must then turn up at the Migration Service and somehow inform them of their place of residence, though how they are to inform them is not made clear.  Then in the space of three days, an official is supposed to turn up at the place given and check that the person is living there.  Yet, she explains, if the person is not there, then within one day the Migration Service informs the department of labour which can take the person off their records.

The situation is a bit better if a person left occupied territory earlier and already had IDP papers. In this case the Migration Service is supposed to check their place of residence over the space of two months, after which the person receives the necessary stamp.  If the person is not there, when the official arrives, they have 10 days in which to go to the Migration Service themselves and confirm their place of residence.

It seems that the Migration Service is also not sure how to enforce the new norms and promise that an official commentary will be published in the near future.

Boris Zakharov, head of the Advocacy Centre of the Ukrainian Helsinki Human Rights Union agrees with Dvoretska about the new resolution. He believes the resolution is an attempt by the government to skimp, by depriving people of IDP status.  He says that a person could move to an oblast or city where they can’t find a Migration Service.  They won’t be able to register in time and their IDP papers will become invalid.

The monthly checks which the resolution mentions effectively chain IDP to their place of residence, he says, calling this a breach of Ukraine’s Constitution.

Dvoretska points out that the resolution will also make it much harder for IDP to find a place to live, as if this were not hard enough.  This can take time, and also will be made that much harder by the fact that any letting arrangement will need to be made officially, with an agreement and payment of taxes.  Not all landlords will wish to face police checks, especially since the police say that they may pass the information on to other departments, including the tax inspectorate.

The human rights activists are calling on the Cabinet of Ministers to change the resolution; increase the time frame for registration and remove provisions which discriminate against IDP.

Not the first problems

A law regulating the status and rights of people forced to leave their homes in the Crimea or Donbas was only signed into law on Nov 20, despite having been adopted by parliament a full month earlier.  The information on the presidential website spoke of amendments that would be made to Law No. 4490a-1 shortly, without providing any detail.

The law set out the procedure for registering IDP and regulated issues regarding employment and social payments.  Any predictions from back when it was adopted of how much money would be spent on such benefits are unfortunately quite out of date with the number of displaced people far higher and ever growing.

As reported here, Ukraine’s parliament first adopted a law on June 19.  It was not, however, the one that had been discussed with civic groups, but a new document only tabled on the day of voting and basically failed to address any of the very real problems which confront people forced to leave their homes.  That bill was vetoed a month later by Poroshenko, however a new bill was adopted at the absolute final moment by the old parliament, and was then not signed into force by the President Petro Poroshenko for a further month.

It is difficult, therefore, not to suspect that these new obstructions are deliberate policy, aimed at reducing the cost of providing for displaced people.