Anger and Protest over Stalin Monument in YaltaPortrait of Stalin appears in Russian-occupied CrimeaStalingrad as latest step in re-glorification of tyrantNeo-Nazis in Moscow’s ServicePro-Russian separatists start their own anti-Semitic TV channelPro-Russian, anti-Roma, anti-Semitic and hunting out Ukrainian speakersThe Donetsk anti-Semitic leaflets – what should not be overlookedEast Ukraine crisis and the ’fascist’ matrixRussia continues its false narrative as defender of oppressed minorities in UkraineRussian propaganda claims Jewish organizations supporting Maidan are bringing on "second Holocaust"The Crimean referendum’s neo-Nazi observersPutin’s Neo-Nazi HelpersChief Rabbi and others dismiss Putin’s “anti-Semitic extremist” claimsRussian propaganda must be challengedWestern Media: Don’t distort the situation in Ukraine!Russia’s aggression poses dangers beyond Ukraine’s bordersCrimea: Anti-Semitic card and other provocation in time of siegeMr Putin: We ethnic Russians and Russian speakers don’t need protectionDangerously orchestrated Crimean exerciseRussia claims threat to its interests and life of Russian nationals in Ukraine
• Topics / News from the CIS countries 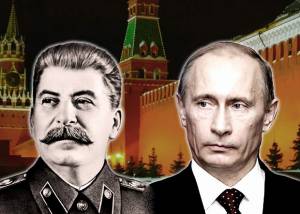 Plans to open a museum dedicated to the murderous dictator Joseph Stalin have been announced just one week after the dissolution of the NGO running the Perm-36 Museum on the site of a notorious labour camp for victims of Soviet repression.  The Tver branch of Memorial has reported that a house-museum is to be created in the village of Khoroshevo (Tver oblast) where Stalin stayed overnight in August 1943 on his way to an area within safe distance from the front.

The proposal to create the museum and open it to mark the 70th anniversary of Victory Day (on May 9, 2015) came from the Russian Military History Society.  This body was created by presidential decree on Dec 29, 2012 “for the purpose of consolidating the forces of state and society in the study of Russia’s military-historical past; countering efforts to distort it; popularizing the achievements of military-historical studies; developing patriotism and raising the prestige of military service”.  Its founders are the Russian Ministries of Culture and of Defence, and the head of the Society is Russia’s Minister of Culture Vladimir Medinsky.  The head of the Board of Trustees is deputy prime minister Dmitry Rogozin, and its academic council is chaired by Vladimir Churov, head of the Central Election Committee.

After the War, the house was initially preserved as a military monument, with a library and small memorial part established.  This was all removed at the end of the 1950s (presumably in connection with Khrushchev’s denunciation of Stalin and his crimes in 1956), however was reinstated in 1983.   A memorial plaque with an order from Stalin was erected on August 5, 2013, marking the 70th anniversary of the visit. 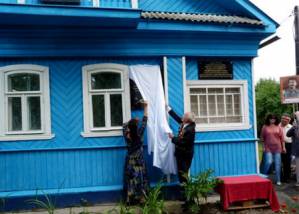 The planned exhibition is to pay particular attention to Stalin “as general; state figure; leader of the country; politician and organizer”.  He is to be presented as a leader whose activities “determined the fate of the post-war world for decades”.  As well as such topics as “Stalin’s role in Victory” and “Stalin as symbol of Soviet success and victories”, the plan is to delve into Stalin’s supposed role in “the revival of the Russian Orthodox Church”.

Mikhail Fedotov, Chairperson of the Presidential Human Rights Council, commented that “as far as the creation of a Stalin museum I would say that there could be many hundreds of thousands of museums of Stalin’s crimes – everywhere where there are the graves of the victims of political repression”.

They are generally unmarked and common graves in which many of our grandparents or great-grandparents were thrown and there are no words to describe the profound affront that this planned museum causes.

The process by which Stalin is gradually being ‘rehabilitated’ in Vladimir Putin’s Russia and information about the victims of Soviet repression muffled gained pace in 2007 when Putin spoke of what he claimed was the need for ‘positive moves’ in the presentation of the country’s history. No more material, he told teachers of history, that “makes your hair stand on end”.  The new history textbooks by Alexander Fillipov promoted for schools presented Stalin as “one of the most successful leaders of the USSR”.

Since then, Stalin’s speech from July 3, 1941 has been added to a list of main sources for senior students to study.   The list does not appear to include equally pivotal addresses like that of Nikita Khrushchev’s denunciation of Stalin, and it seems safe to assume that the pact between Hitler and Stalin and agreement to carve up Poland between them will be brushed over, if not ignored altogether.

In May, 2014, Putin effectively seconded proposals to rename Volgograd, restoring the name Stalingrad which the city held from 1925 and which is remembered because of the Battle of Stalingrad in Feb 1943.

Within a year of Russia’s invasion and annexation of Crimea, a monument was unveiled in Yalta to Stalin, British Prime Minister Winston Churchill and US President Franklin Roosevelt.  That event was timed to mark the seventieth anniversary of the signing of the Yalta Agreement which caused endless suffering to hundreds of thousands of people who were forcibly returned to the USSR, and rubber stamped Stalin’s carving up of Poland.   The move was an open insult to Crimean Tatars whom Stalin had deported as a people in 1944, but is deeply offensive to most Ukrainians.

The diagnosis we leave to Valentina Sharipova, co-head of the Tver branch of Memorial.  She suggests that the whole pathos over this historical memorabilia is about “propping up the glory of our modern general Putin of Crimea.  To draw parallels, so to speak”.  There are masses of teams in Russia right now, working on monuments to Russia’s present leader.  Sharipova writes:

“It has to be admitted: tyranny in Russia is like a hereditary disease. And like a brain tumour, virtually incurable”.