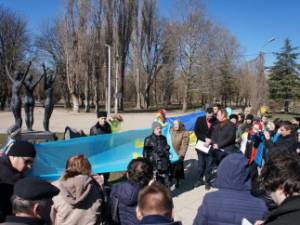 The organizer and two participants in a peaceful action marking the 201st anniversary of the birth of Ukrainian poet Taras Shevchenko have received corrective labour sentences and the organizer, Leonid Kuzmin, is also threatened with dismissal

The event that resulted in three Crimeans being detained by police, interrogated over likely ‘extremism’ and now penalized by a court in Russian-occupied Crimea can be viewed here: https://youtube.com/watch?v=j0_9MjntQdk and

Under Russian occupation all has changed. The meeting was only allowed in Gagarin Park in Simferopol, and each person who attended is likely to have experienced some warnings or attempted intimidation.

Those present held a Crimean flag and at least two Ukrainian flags, one with the words: “Crimea is Ukraine”.   Many of the young people present were also holding balloons in the colours of the Ukrainian flag, and one of the three men detained attached ribbons in the colour of the flag to the Gagarin monument.

The echoes from Soviet times are poignant and frustrating.  Now, as then, bringing flowers and reading the poems of Shevchenko have turned into a civic act for which people can lose their jobs or face court sentences.  On Monday, as in Soviet times, Security Service officers and police took note of every move.

Leonid Kuzmin, who organized the event, reported on Wednesday that he is facing dismissal from the Simferopol school where he teaches. He told the Crimean Human Rights Field Mission that he had been called in to see the school head and told that it was inadmissible to engage in ’political activities’  “I’m supposedly shaming the moral image of the teachers, introducing imbalance to the academic process and heightening conflict.  They suggested I resign myself, otherwise they threaten to dismiss me using an article [of the Labour Code]”, Kuzmin explained.

He and two others – Veldar Shukurdzhiyev and Oleksandr Kravchenko – were charged with “infringement of the established procedure for organizing or holding a gathering, rally, etc.”.   The prosecution had to make some attempt to explain where the alleged infringement lay, and the hearings as a result became quite farcical.

The prosecution, for example, triumphantly presented photos showing Veldar Shukurdzhiyev holding the Ukrainian flag with the words “Crimea is Ukraine” on it.  The problem with such ‘evidence’ was indicated by the defendant himself who didn't dispute that he had been holding the flag but pointed out that Ukrainian symbols are not prohibited in Crimea, nor in the Russian Federation.  This statement of undisputed fact did not impinge upon the legal consciousness of Judge Natalya Urzhumova who found Shukurdzhiyev guilty as charged, and sentenced him to 40 hours of community work.

When asked for his response, Shukurdzhiyev was remarkably tolerant of the judge’s behaviour saying that she had been put in an uncomfortable position by illiterate police officers, and that she had issued a ruling “with the least harm for us”.

That this was the least could be disputed, however Shukurdzhiyev does seem justified in concluding that from now on people can be subjected to persecution and punishment by the authorities in Crimea for Ukrainian symbols.

Kravchenko was more blunt in his assessment of his court hearing and the ruling, labelling it all ‘farce’.  The police officer who had detained him got up and claimed that the yellow and blue ribbons attached to his jacket were ‘prohibited symbols’.  Despite the lawyer Emil Kurbedinov’s correct objection that there is no law prohibiting Ukrainian symbols and the police officer’s inability to provide any sensible answer, Urzhumova again went along with the prosecution and sentenced Kravchenko to 40 hours corrective work.

She also states in the ruling that Kravchenko’s argument that in holding the event, he could use the Ukrainian flag since Shevchenko was a Ukrainian poet was not taken into account since the court considers this to be Kravchenko’s subjective opinion and incorrect.  Her reason: Ukraine did not exist as a separate state in Shevchenko’s time.  Using this argumentation, Urzhumova concludes that the use of the Ukrainian flag at a meeting marking the 201st anniversary of the birth of Shevchenko was an infringement of the rules on holding this event.

Three ‘witnesses’, all police officers, were called at the hearing into Kuzmin’s case.  The first officer said that Kuzmin had been detained for holding a Ukrainian flag which the officer deemed to be a ‘prohibited symbol’.  Kuzmin, in fact, says that he was not holding a flag.  A police major then claimed that there had been “provocation” and that the organizer had “infringed the topic of the event”.  A statement which Taras Shevchenko would certainly have disputed.  The third repeated his colleagues’ claims.

Kurbedinov points out that there is no indication in the protocol of detention what article of the Administrative Code Kuzmin is supposed to have infringed.  He too was ordered to do 40 hours of community work.

The sentences imposed were for non-existent offences and are therefore, by definition, excessive.  There was, however, concern that they could be worse – that the men would be accused of ‘extremism’ which under Russian legislation is often used against those holding views the regime does not like.   Or that the law which came into force last year criminalizing “public calls to separatism or extremism” might be applied with respect to the flag reading “Crimea is Ukraine”.

When a Ukrainian flag is deemed ‘prohibited’ and results in court sentences, then little else, unfortunately, remains inconceivable.