"I want to die in Ukraine". The other victims of annexation 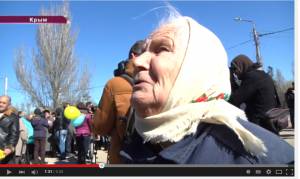 One of the people who came to remember the Ukrainian poet Taras Shevchenko in Simferopol on March 9, the 201st anniversary of the poet’s birth was Klavdiya Ivanivna.  She explained to Chornomorska.TV that she had come “to hear the Ukrainian language that she loves, and to ask whether they will soon be freed from this occupation.  https://youtube.com/watch?v=j0_9MjntQdk (from 1.19)

She becomes distressed as she speaks, but the sense of her words are clear:

During these poignant days around the first anniversary of Russia’s invasion and annexation of Crimea, there is a long list of victims to be remembered*:

Reshat Ametov, the 39-year-old father of three young children, who was abducted while standing in peaceful protest and brutally murdered;

Crimean Tatar leader Mustafa Dzhemiliev and Head of the Crimean Tatar Mejlis Refat Chubarov, and others, who have been exiled from their homeland;

Those who have disappeared without a trace, including civic activists and young Crimean Tatar men abducted from outside their home;

Most, if not all, have been targeted by the occupation regime for their opposition to Russia’s annexation.

There are innumerable other victims, however.  Many were forced to leave their native Crimea, unable or unwilling to live under occupation.

Back in March 2014, another elderly lady from Feodosia tried to make the Russian soldiers sent in to occupy her country understand the following:

Others nearby, including the so-called ‘self-defence’ paramilitaries who worked together with Russian soldiers in crushing opposition, shouted 82-year-old retired teacher Nadiya Mykolayivna Samoilova down, and the rest of her words are hard to catch.

She was told to get out, and that she was a “provocateur”.  And knocked down.

Ukraine’s history over the last century was hard, and for all too many Ukrainians, including the indigenous people of Crimea – the Crimean Tatars, the word ‘exile’ became imbued with intense pain.  It is no accident that many of the songs of mourning played at funerals speak of dying in a foreign land.

Klavdiya Ivanivna and very many like her also wish only to die in their native Ukraine.