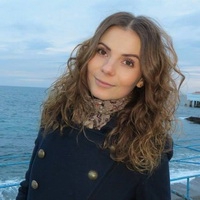 Update   Natalya Kokorina was released on Friday after over six hours in the FSB office in Crimea.  According to Radio Svoboda’s Crimean Service,  her lawyer believes that other journalists from the Centre for Investigative Journalism are likely to face searches and interrogation.  Kokorina was brought to the FSB offices at around midday after a 4-hour search of her parents’ home.  In an especially telling move, in the early evening an FSB officer came out to the journalists gathered outside waiting for Kokorina and her lawyer and asked who had a Russian passport saying that they could ‘help’ Kokorina.  There was nobody, and a few minutes later a car drove up with a journalist and cameraman from the state-controlled ‘First Crimean’ Channel who, it transpired, were used as witnesses for the removal of Kokorina’s laptop.  It does indeed appear [see below] that the excessive measures taken against the journalist are related to an article written by Anna Andriyevska about the Krym [Crimea] battalion [see below].  Kokorina was interrogated as a ‘witness’.

The Russian occupation authorities have launched a new offensive, this time against journalists from the Centre for Investigative Journalism, possibly following an article about Crimeans fighting in Donbas and their hope for Crimea’s return to Ukraine

One journalist has been taken away by Crimean FSB officers following a search of her home on March 13.  Another search was carried out of the home of parents of a journalist forced to leave Crimea after the so-called ‘referendum’ last March.  As the anniversary of Russia’s formal annexation of Crimea approaches, more arrests have been made of Crimean Tatars over a demonstration before Russia’s invasion.

Natalya Kokorina, an editor of the Simferopol-based Centre for Investigative Journalism, an independent  journalist initiative, has been taken away following a search by FSB officers.  She was called in the morning and told to appear at the home of her parents where she is officially registered.  In direct breach of the law the officers refused to allow lawyer Dzemil Temishev to be present during the search.   Kokorina’s parents’ phone had been switched off, and presumably her phone has been taken away, with all direct contact lost after she arrived at the flat.

FSB officers also carried out a search of the home in Simferopol of journalist Anna Andrievska’s parents.  The journalist herself was previously an editor at the Centre for Investigative Journalism  and still writes for the Centre, but from Kyiv where she has been living since she left Crimea following Russia’s annexation. Her father was presented with a Simferopol court order stating that criminal proceedings have been initiated against her over material which allegedly contained calls to overturn the regime in Crimea.

The ‘criminal proceedings’ appear to be linked with one specific article written by Anna Andrievska and published by the Centre on Dec 11.  The article “Volunteers of the Crimea [Krym] Battalion”  is about people providing support for the Krym [Crimea] volunteer battalion fighting in Donbas, and for other Crimean units fighting within other battalions.

The article is largely about those civic groups and individuals who are helping  to provide Crimeans fighting with food and other assistance.   The following excerpts may possibly be what over-zealous FSB officials have deemed ‘criminal content’.

The last words of the text are undoubtedly the author’s.  Given that the FSB may deem them ‘incriminating’, they are translated here in full:

She explains that any ceasefire has been breached, and that the needs of Ukrainian fighters are unlikely to decrease in the near future.  “Crimeans, for example, could more actively support the Krym Battalion. Considering that its soldiers say that their main aim is to return the occupied peninsula to Ukrainian control.  It should be understood that it is this that businesspeople, many of whom also moved from Crimea after its Russian annexation, want.  So is it not time to begin returning it?”

A call to violent overthrow of the regime?

As reported here, a new law in Russia came into force on May 9, 2014, criminalizing ‘public calls to separatism’.  The move was seen as highly ironic given Russia’s extremely direct role and massive funding and manning of the so-called ‘separatists’ in Donbas.

It was also immediately understood as posing a major threat to freedom of expression in Crimea.  Media freedom was in any case significantly curtailed from shortly after Russia’s invasion, with most Ukrainian channels removed from air altogether, and independent media like the Crimean Tatar TV channel ATR, Chornomorka and others under serious pressure or, in the case of Chornomorka, forced to broadcast from mainland Ukraine.  A number of independent media, including QHA – the Crimean Information Agency  - are likely to be shortly prevented from functioning after being refused registration under Russian legislation.

A year ago Russia’s puppet ‘government’ installed in the presence of armed Russian soldiers organized a blitzkrieg ‘referendum’ and claimed nearly 100% support for joining Russia.   The results were reported to be false even by Russia’s own Human Rights Council and not recognized by the international community.

A recent survey carried out by the pro-Russian Krymskaya Pravda was swiftly removed after results showed majority support for greater autonomy within Ukraine and belief that if Russia had not annexed Crimea, everything would have been absolutely peaceful and fine.

Over recent months there has been a major escalation in repressive measures against the Crimean Tatars and their representative bodies, and against all those who openly express their allegiance and retain their citizenship of Ukraine.  On March 12, three Simferopol residents were sentenced to terms of community work for supposedly using ‘prohibited symbols’ during a peaceful gathering marking the 201st anniversary of the birth of Ukrainian poet Taras Shevchenko.  Both the police and a court in Russian-occupied Crimea decided that a Ukrainian flag was ‘prohibited’.

Russia’s constant narrative about rescuing Crimea from imminent bloodshed and supposed mass support in Crimea for joining Russia was always treated with scepticism in the West.  The lie is made equally evident by such paranoid inability to cope with peaceful dissent and Soviet levels of repression against dissidents