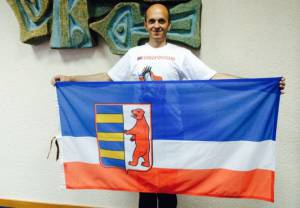 Petro Getsko: “Rusins are prepared to use force to seize autonomy”

As the first anniversary of Russia’s annexation of Crimea approaches, pro-Kremlin media have renewed efforts, first tried in parallel with events in Donbas last April, to invent separatist demands for Rusin autonomy in Western Ukraine

While the Internet buzzes with rumours about the Russian President’s whereabouts, for pro-Kremlin media it’s been largely business as usual.  Business on the eve of the first anniversary of Russia’s annexation of Crimea has included reporting a totally fictitious congress demanding autonomy for the Rusin ethnic minority of Zakarpattia in Western Ukraine.  Where not backed with endless supplies of arms and fighters, all Moscow’s attempts to stir up separatism in Ukraine have failed abysmally, and its Zakarpattian card, first played in April 2014, is no exception.

On March 14, TASS news agency reported that “The Rusin of Transcarpathia are demanding recognition of their national identity and autonomy through dialogue”.  The report, supposedly from Kyiv, quotes “leader of the Transcarpathian Rusins Petro Getsko  as saying that “a congress of Rusin organizations of Transcarpathia adopted a decision to seek recognition from the Ukrainian authorities of Carpathian Rus via dialogue with Kyiv”.  Getsko states that the ‘Coordination Council’ will be seeking to negotiate with the authorities in Kyiv about recognizing the results of referendums in Transcarpathia in 1991 in which, according to Getsko and Russian media,   around 80% of the inhabitants effectively voted for giving the region autonomous status.

It should be stressed that even if there was ever such a result, it would not have been for Rusin autonomy, but for the geographical area which is ethnically very mixed.  Only 10% of the Transcarpathia population identified themselves as Rusin at the time of the 2001 census.  There are people who see themselves as Rusin in Slovakia, Croatia, Serbia and the most southern part of Poland.

The TASS report lists six organizations that purportedly took part in this “congress of leading Rusin organizations of Transcarpathia”.   In a somewhat bizarre use of terminology, its “council” is reported to contain around 40 thousand people.  According to TASS’s background note, Rusins have been trying to achieve autonomy and recognition as a separate ethnic group for the last 20 years.  The news agency claims that “despite its “west Ukrainian geographical position, Transcarpathia has voted in all elections held in independent Ukraine like people in eastern regions of the country”, and that the region has led moves to sabotage mobilization. It cites anonymous ‘experts’ as attributing this to “innate immunity against militarism and Russophobia.”

The report was picked up by many other Russian media.  Probably assuming that news from Ukraine about a supposed event in Ukraine would have more credibility, the Russian government-controlled RIA Novosti quoted “the Ukrainian publication Podrobnosti” as source.   Most readers don’t check out the allegedly original report, which is a great shame in this case since just the title of the Podrobnosti report would have sufficed: “The Kremlin is claiming that Transcarpathia Rusins are demanding autonomy”.

If the original Russian TASS report really was written in Kyiv, then the author must have phoned Russia to speak with Getsko who has been on Ukraine’s nationwide wanted list since April 2014, and is believed to be living in Russia.  The problem, however, is not simply that Getsko could not have been present at the congress, but that there quite simply was no such event.

Yevhen Zhupan, head of the People’s Council of Rusins of Transcarpathia which represents 90% of the oblast’s Rusin population, told a Transcarpathian publication Mukachevo.net that the statement about a congress and autonomy was an act of provocation. He added that of the 6 organizations which TASS listed, most had learned of the supposed congress and their participation from TASS.  Getsko, he said, has not been in Transcarpathia for the last 3-5 years, but has since early 2014 been actively involved in pushing a narrative about alleged rebellions in Ukraine and separatism in Transcarpathia for the Russian media.

Zhupan pointed out that the People’s Council met a month ago and adopted a statement expressing its support for European integration; democratization and decentralization.

In December, 2014, Getsko, in his self-proclaimed capacity as ‘prime minister’ of an unrecognized ‘republic’ spoke at a press conference in Rostov on the Don in Russia.  He claimed that there had long been “ethno-cultural genocide of Rusins, as well as forced Ukrainization.

“We do not want resolution through force, but if we have to do it, then we will do it in one day. It is no problem for us to seize power”, Getsko said.

He asserted that an ombudsperson from the European Parliament would be arriving “on the territory of Carpathian Rus” from Brussels who would “consider all cases of genocide of Rusins by the Ukrainian government. Petro Getsko also called on Russia to take part in this process”.

Russia’s ‘part in this process’ has become all too familiar over the last year, and EU countries would do well to consider how such overt attempts to invent and play a separatist card gel with the Minsk accords.  On the anniversary of Russia’s blitzkrieg annexation of Crimea, words about seizing power in a day can no longer be viewed as mere hyperbole.