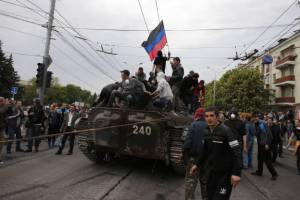 A recent Russian propaganda channel reduced a 4-minute series of interviews in the city of Sloviansk into 1 minute and then triumphantly reported that “the residents of Ukraine’s Sloviansk trust Putin and don’t know Poroshenko”.  TV ‘Zvezda’ omitted the following answers to whether people trusted Russian President Vladimir Putin: “Of course not”; “He was always an arsehole and please God that he dies!”.

Uncensored versions of that survey and others would not necessarily present a glowing picture of support for Kyiv’s leaders, but they are certainly not good material for Russian propaganda.  According to the latest survey carried out by the authoritative Democratic Initiatives Foundation [DIF] and Razumkov Centre, 50% of Donbas residents believe that they should remain part of Ukraine, while 35% said they were against that.  Of the 35%, 20% thought that the self-proclaimed ‘Donetsk people’s republic’ [‘DNR’] should be a separate state and 15% - that it should join Russia.

Iryna Bekeshkina, DIF Director, points out that Donbas stands out from the rest of Ukraine where the last year has led to a dramatic increase in identification from Ukraine.  If previously people often identified themselves according to region or city, now 73% identify themselves in the first instance as Ukrainian citizens with the increase mainly due to changed attitudes in the east and south of the country.  Even in Donbas, half of the respondents identified themselves in terms of citizenship.

A survey of Sloviansk and Kramatorsk following their liberation carried out in late November last year found interesting differences between the two cities which are a mere 15 kilometres apart.

All are united in wanting an end to the war, but divided as what the solution might be.  Kramatorsk is generally more pro-Ukrainian, Sloviansk more pro-Russian.  Bekeshkina explains that industry is still more or less functioning in Kramatorsk. “People work, receive their pay, are confident about the future and are very frightened that the ‘DNR’ will return. They value their situation and are frightened of things getting worse. Sloviansk on the other hand is a depressed city. .. with a high level of unemployment.”  Bekeshkina stresses that language is not the issue, with both cities Russian-speaking.  Corruption, she says, is a divisive and corrosive force everywhere.

‘Nationalism’, she says, is a real bogeyman in Donbas with a third of the population believing that it is nationalism that divides Ukrainians.

Bekeshkina suggests only bemusement with such a view, though in fact it is probably not surprising given the fact that while under ‘DNR’ control, they had access to only Russian media which strongly pushes this idea.

She does, however, point out that “people there are more frightened of the return of ‘DNR’ than they are of Right Sector” [the nationalist party which Russia has been demonizing since the time of EuroMaidan]

The effect of anti-Ukrainian propaganda was also observed by a human rights mission, with representatives from the Kharkiv Human Rights Group, Russian and German human rights groups.  Over the last 3 months of 2014, it made several visits to cities which had been under ‘DNR’ control, including Slovyansk and Kramatorsk during the last three months of 2014.

They report that after months when the Kremlin-backed militants had done everything to scare the population with reports of ‘punitive Ukrainian forces’, people awaited the Ukrainian armed forces with great trepidation.

“The residents of Krasny Lyman, the city liberated first on June 4 recounted how they had awaited with terror ‘purges’; arrests; repression from the Ukrainian armed forces. However the ‘purge’ was confined to a simple viewing of flats, without even checking documents, and the first day of Sloviansk’s liberation began with free sausages being handed out.  There were no reports later either of repression against the local population in liberated cities.”

That was also ignored by the Russian propaganda machine.