Piskorski & Moscow’s other far-right ‘observers’ in Crimea, Donbas & beyond 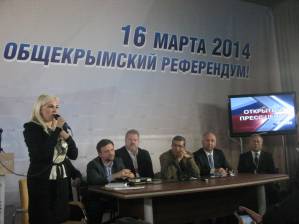 The Financial Times report on a new aggressively pro-Russian party in Poland – Zmiana – was probably not deliberately published on March 16, the anniversary of the so-called referendum in Crimea on ‘joining Russia’.  A probe into the party leader Mateusz Piskorski’s involvement in that event and others would, however, have been appropriate given Piskorski’s denial of “suggestions that he is an “agent of the Kremlin”.

Piskorski also denies receiving any financing from Moscow which we can only hope others will check.  What is quite undeniable is his extremely active role in providing services to Moscow, including with respect to rubber stamping its ‘electoral’ stunts in, for example, Crimea, Donbas, St. Petersburg and Moldova.

Piskorski led a team of ‘international monitors’ of the Crimean ‘referendum’, most of whom are from far-right or neo-Stalinist parties in Europe and beyond.  At least some were financed by the Russian-based Eurasian Observatory for Democracy and Elections headed by Luc Michel and Jean-Pierre Vandersmissen, both supporters of the neo-Nazi Jean-François Thiriart and members of the extreme right Parti Communautaire National-Européen (PCN-NCP).  The list of supposedly 135 observers included representatives of the far-right parties Jobbik (Hungary); Ataka (Bulgaria); Vlaams Belang (Belgium); Freedom Party (Austria) and others. There were also members of neo-Stalinist or extreme left-wing parties, including Germany’s Die Linke.  Two Bundestag deputies from this German party recently illegally entered Ukraine from Russia and helped in a propaganda stunt for Kremlin-backed proxies of the self-proclaimed ‘Donetsk and Luhansk people’s republics’.

An unsigned Joint statement by the independent International Observers can be read on the Internet, together with numerous other reports, praising the running of the ‘referendum’ as exemplary, and fully endorsing ‘the electoral will of the Crimean people’ it supposedly expressed.

The ‘referendum’ was condemned by the UN, the EU and basically all democratic countries and its results have been scorned even by Russia’s own Human Rights Council.

Whether Russia’s President Vladimir Putin miscalculated, believing that the West would swallow such an obvious farce, remains unclear, however the value of such ‘observers’ in legitimizing Moscow’s land-grab within Russia should not be underestimated.  A quick Google search will make it clear that within a year or so of the events, it will be easy to deceive many people in other countries about the true nature of the ‘referendum’ and the role the ‘observers’ played.

If in March 2014, these ‘observers’ were not breaking the law by entering Crimea, this was not the case in early November where many of the same brigade, including Piskorsky, gave the same glowing praise of the ‘elections’ held by the Kremlin-backed militants in Donbas.  This time, all ‘observers’ entered Ukraine illegally, after being put up in a four-star hotel in Moscow and then taken to Rostov and the militant-controlled border.   Ladislav Zemanek, deputy head of the Czech far-right Eurosceptic ‘People’s Party’ stated on facebook and then confirmed to Radio Svoboda that his trip had been organized and paid for by Moscow.  Piskorsky was especially active in providing good propaganda for an event in which Russian ‘humanitarian aid’ was sold at throw away prices to entice people to the polling stations, and they entered a ‘polling booth’ surrounded by men with machine guns.  Although Moscow was later to change its ‘recognition’ to mere ‘respect’ in the hope of averting sanctions, Piskorski, Luc Michel and all the other far-right ‘observers’ praised everything without exception.

Nor is this the full extent of Piskorski’s ‘electoral services’ for Russia.  Anton Shekhovtsov, researcher into far-right movements, reports that Piskorski was the coordinator of a team ‘observing’ the St Petersburg regional elections in September 2014.  Shekovtsov speaks of “almost a regular pool of individuals who are invited to legitimise controversial or unfair elections.”  Piskorsky, he says, has since 2007 “been the head of the European Centre for Geopolitical Analysis that specialises in legitimising controversial elections in Eastern Europe and Asia”.

Shekhovtsov told the St. Petersburg Times that Piskorski’s Centre normally monitors “‘strange, ’ controversial, disputed elections that happen in places like [pro-Moscow breakaway territories] South Ossetia, Abkhazia and Transnistria or in Crimea. This organization is unambiguously pro-Russian. In my opinion, I believe, Piskorski receives commissions from Moscow to legitimize such elections, and their presence at any elections indicates from the very start that they would say that the election was normal, fair and transparent.”

The united position in support of Russia’s ‘electoral’ initiatives shown by extreme right and left parties is, incidentally, reflected also in the Polish Zmiana Party.  Its founders include the extreme right Falanga Party and the neo-Stalinist Communist Youth of Poland.  Falanga and its leader Bartosz Bekier have been extremely active in supporting Russia’s undeclared war in eastern Ukraine.

Henry Fox, writing from Poland for FT, mentions only that Piskorski’s party “rejects suggestions of a Russian military invasion of Ukraine, condemns western sanctions against Moscow and seeks a friendly partnership with president Vladimir Putin”.

Any reference to Piskorski’s highly active efforts to legitimize the behaviour of both Moscow and its proxies in Crimea and Donbas is confined to mention of Piskorski’s invitation to “the self-styled foreign minister of the unrecognised Donetsk People’s Republic to his party’s founding congress”.

For the leader of a new political force hoping to win 10% of the votes in the next elections, it is surely of major importance to know the role he played in events condemned by virtually all democratic countries and the EU.   It is also of critical importance for people in EU countries to follow who is trying to change fundamental trends in EU countries’ foreign policy and how.