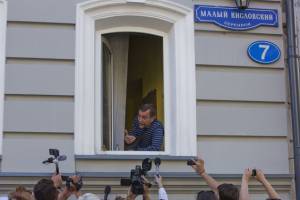 The Movement’s director Lev Ponomarev talking to journalists during a previous visitation by the enforcement bodies in 2013 (photo: Novaya Gazeta)

A day after a Moscow court upheld the justice ministry’s decision to forcibly enter the Movement ‘For Human Rights’ on the Register of ‘Foreign Agents’, another court has fined the Movement 300 thousand roubles for refusing to register itself.  During the previous day’s court hearing, the ministry spokesman claimed that the ministry was not seeking the Movement’s closure.

‘For Human Rights’ is one of Russia’s oldest human rights movements, and has consistently spoken out over mounting rights abuses in Russia.  Like most other rights organizations, it has refused on principle to comply with legislation clearly aimed at stigmatizing NGO’s as ‘foreign agents’.  Other NGOs forcibly added to the register include Soldiers Mothers of St. Petersburg, the Memorial Human Rights Centre, the Sakharov Centre and the Committee against Torture in Nizhny Novgorod.  Like the Movement, many of these organizations have been actively investigating cases where Russian soldiers have been sent, often against their will, to fight in Ukraine.

As initially reported, Moscow’s Zamoskvoretsky Court on March 16 supported an original Justice Ministry decision from the middle of December which included the independent Movement ‘For Human Rights’ on Russia’s notorious register of NGO ‘foreign agents’.

The Justice Ministry’s representative in court asserted that their (unscheduled) check had found that the NGO had on a number of occasions received donations from abroad, “while its members had carried out public campaigning and called for amendments to legislation”, this, according to the Ministry, constituting ‘political activities’.

The NGO was represented by well-known lawyer Henri Reznik who insisted that its activities could not be called ‘political’, and noted that the law fails to clearly define the criteria for defining such activities. It was indicative that the Ministry had to turn to a political analyst for clarification.  “The law is written for everybody, and not for the understanding of specialists in a narrow field. The Ministry is using the failings of the law to remove any critical activities”, he continued, adding that the ruling was being made at a time when clarification has still not been provided by Russia’s Supreme Court.

The Justice Ministry announced its unscheduled check in November only two months after a scheduled one was carried out without any infringements being noticed.  At the time, the NGO’s Director Lev Ponomarev reported that the check as to whether the rights organization should be forcibly labelled a ‘foreign agent’ was asked for by the Prosecutor General’s Office.  Ponomarev insisted that the organization’s last foreign grant had ended in December 2013 and that there were no grounds for calling it a ‘foreign agent’.

Last week it also issued a statement in support for Eva Merkacheva and Andrei Babushkin who were subjected to searches and interrogation after they reported allegations of torture and ill-treatment made to them by people held in detention accused of murdering opposition leader Boris Nemtsov on Feb 27 near the Kremlin.   Babushkin and Merkacheva were formally named as ‘witnesses’ and made to sign commitments to not disclose any information which the Movement calls “a flagrant violation of Russian legislation aimed at obstructing their human rights activities”. The threat against the two human rights activists of criminal proceedings for supposed obstruction of the investigation “is an attempt to put pressure, both on Merkacheva and Babushkina, and on all members of Russian monitoring commissions”.

The arrests and claims that the murderer of Boris Nemtsov was angered by comments he made after the Charlie Hebdo attack have aroused widespread scepticism. Few believe that the Russian Investigative Committee with its blitzkrieg arrests has any particular interest in punishing the real perpetrators, nor of finding those who ordered the killing of one of Russia’s truly honest and courageous politicians who had angered the Kremlin with, among other things, his investigations into and criticism of Russian aggression in Ukraine.