One Year After Annexation, Remembering The Crimea That Fought Back 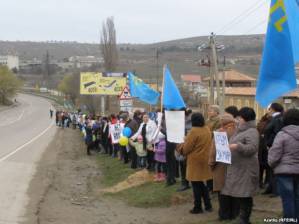 Pro-Russian activists and Crimean Tatar protesters and supporters of Euromaidan face off near the parliament building in Simferopol on February 26, 2014.

By Ivan Putilov and Daisy Sindelar

KYIV -- Crimea was largely quiet during last year’s Euromaidan antigovernment protests. But all that changed on February 23, a day after President Viktor Yanukovych’s ouster.

Thousands of Crimean Tatars gathered outside the Council of Ministers in the local capital, Simferopol, calling for the parliament to be dissolved and the constitution rewritten to protect the rights of indigenous people.

The Crimean parliament responded by calling an extraordinary session three days later. Refat Chubarov, the head of the Mejlis, the Tatar governing council, said he feared a "dangerous" decision.

"I could feel how unusual the situation was, " Chubarov said. "I immediately called the Mejlis, and once again we called on people to rally."

More than 10, 000 people turned out on February 26, squaring off against a smaller group of pro-Russian separatists. Fisticuffs broke out inside and outside the parliament. But finally lawmakers agreed to the Mejlis protesters’ most basic demand: postponing the session.

Ukrainian and foreign journalists portrayed the outcome as a victory over pro-Russian elements.


"We went home satisfied that we had saved ourselves, saved Crimea, and saved Ukraine, " Chubarov said.

A year later, Crimea is under Kremlin control -- and Russia’s Investigative Committee is treating the events of February 26 as a criminal case.

Chubarov has been barred from the peninsula together with Crimean Tatar figurehead Mustafa Djemilev. Akhtem Chiygoz, the deputy chairman of the Mejlis, has been taken into custody on suspicion of organizing the rally.

But as Russia this week continues its anniversary celebrations of the Crimean annexation, sealed by a controversial referendum on March 16, 2014 (which was declared illegal in an overwhelming vote in the UN General Assembly), Chubarov and others say many on the peninsula were fiercely opposed to the deal. The referendum was

The Kremlin, which portrays the annexation as a rosy reunion between long-lost kin, points as evidence to the referendum, where more than 95 percent of voters backed the Russia deal.

But critics like Ukrainian activist Konstantin Reutsky said the result was sharply skewed by a menacing mix of propaganda, intimidation, and the "little green men" -- later acknowledged to be Russian soldiers -- who quickly seized government buildings and carried out armed street patrols.

"People felt the danger; they were confused, " he says. "But that’s because [Russians] had artificially created an atmosphere of fear. Everywhere you looked there were these pro-Russian ’activists, ’ sometimes carrying automatic weapons and suggesting pretty unambiguously that pro-Ukrainian views weren’t welcome."

Nonetheless, in early March, Crimeans distraught by the rising number of pro-Russian rallies again began to stage demonstrations in Simferopol and elsewhere.

On March 8, 2014, as many as 15, 000 protesters -- mainly women and children -- lined roadways throughout Crimea waving Ukrainian and Tatar flags and holding posters calling for peace.

The resistance reached its peak with mass protests on International Women’s Day, March 8, when as many as 15, 000 protesters -- mainly women and children -- lined roadways throughout Crimea waving Ukrainian and Tatar flags and holding posters calling for peace.

"Many Crimeans came out, no matter their nationality, " said Andriy Shchekun, a Simferopol-based activist. "It was a consolidation, a demonstration of how all Crimeans felt. In principle it was the real majority, and we saw the real picture. We organized a major event without allocated money or political connections. It was a true civil protest against what was happening in Crimea."

Many of the protesters extended their activities to include aiding besieged Ukrainian soldiers and fighting off members of the so-called "Self-Defense" forces of pro-Russian youths harassing activists and others.

"We were always peaceful, but very often we were pushed or provoked to fight, " said Simferopol activist Oksana Novikova, who ultimately fled with her children out of safety concerns. "The police would just stand there watching and do nothing."

Members of the Crimean intelligentsia also proved active during the protests. Halyna Dzhikayeva, whose Karman art center was known for staging politically provocative works, said a majority of her audiences were openly opposed to the Russian invasion.

"We cultivated our audience to think, " she said. "Our performances weren’t light entertainment. They forced people to think critically about the things going on around them. So the people who went to the theater, who came to see our performances, were independent-minded."

Dzhikayeva now lives on the Ukrainian mainland, where she fled last summer to avoid FSB questioning regarding her friend, Crimean film director Oleh Sentsov, who was arrested last May by Russia on suspicion of plotting terrorist acts.

"Nearly everyone has left, " she said. 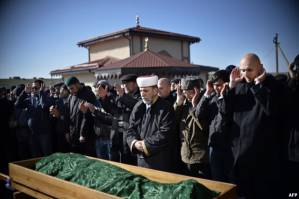 Members of the Crimean Tatar community pray over the coffin of Reshat Ametov during his funeral in Simferopol on March 18, 2014. He was found dead on the day of the referendum. His body bore signs of torture.

Many Crimeans say high-profile arrests like that of Sentsov have effectively silenced many protesters in the months since the referendum. So, too, has the threat of violence. At least seven people have vanished without a trace after being abducted in September 2014.

Another, Reshat Ametov, was found dead, with signs of torture, on the day of the referendum,  two weeks after being abducted from a protestagainst the military presence in Crimea.

Shchekun himself was kidnapped on March 9, 2014, and spent 11 days in captivity together with fellow activist Anatoliy Kovalskiy. Both men were brutally beaten and tortured with electric rods before finally being released. No one has ever been held accountable for any of the disappearances or Ametov’s death.

One year after annexation, Shchekun says the atmosphere in Crimea has become so oppressive that even ethnic Russians who favored ties with Moscow have come to regret their zeal.

"A year ago, they were shouting their support for Russia, " he said. "Now they don’t seem to be making such strong statements about what a good idea this was. They don’t understand that the same misfortunes [I’ve experienced] are eventually going to darken their houses as well."