«We’ve ceased to be brothers”. How Putin got it wrong 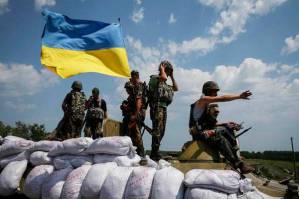 Vladimir Putin may consider Ukrainians and Russians to “to be one nation”, as he believed it appropriate to announce on the anniversary of Russia’s annexation of Ukrainian Crimea, but he could not be more wrong.  It is precisely Moscow’s aggression against Ukraine over the last year that has lost him Ukraine forever.  As Iryna Bekeshkina, head of the Democratic Initiatives Foundation put it, “we’ve ceased to be brothers”, and the results of the last public opinion services suggest that there is no going back.

The narrative so assiduously pushed by Moscow about there being a ‘civil war’ underway in Ukraine does not wash with Ukrainians, 70% of whom are now sure that Ukraine is at war with Russia.  Support for moving closer to Russia among Ukrainians has fallen in the last year from 46% to 22%.  Bekeshkina notes that the years of trying to be in both camps – East and West – have passed.  For the first time ever a majority of Ukrainians (46%) would support joining NATO (as against 13% in 2014), with another 20% opting for neutral status (against 42%) . Only 20% (from Donbas, other eastern and southern oblasts) would want a military union with Russia.   Particularly staggering is the result in the DIF January service in the Donetsk oblast.  17% said they would be in favour of joining NATO.  While this is obviously a minority, it is significantly higher than the previous 3-5% support.

“Ukrainians’ love for Russia is fading before our eyes. If in February last year 78% of Ukrainians were kindly disposed towards Russia, this had fallen by the end of the year to 36%.  We have ceased to be brothers. And a parallel process is underway: more and more Ukrainians see themselves in the first instance as citizens of Ukraine”.

There has been a significant increase both in identification with Ukraine and patriotism, with 73% now viewing themselves first as Ukrainians, and only then as residents of a particular region.  All of this has taken place because of changes in attitude in the east and south of Ukraine, those regions where Moscow has particularly tried to stir up separatist sentiments.

In a recent survey carried out by DIF and the Razumkov Centre, a large majority – 69% consider Crimea to be Ukrainian territory annexed by Russia.  Only 14% view Crimea as part of the Russian Federation, with only 8% of these believing that it was joined to Russia legally.   10% believe that Crimea is neither Ukrainian nor Russian.

The survey could not be carried out either in Crimea itself or in the Luhansk oblast.  It seems likely that the latter’s results would have differed radically from the rest of Ukraine, as did those for Donetsk oblast where only 22% of residents saw Crimea as Ukrainian territory annexed by Russia, and 29% said that Crimea was Russian and joined legally (with 25% saying that it was neither Ukrainian nor Russian).

Donbas was always different from the rest of Ukraine and this was positively encouraged under the rule of Viktor Yanukovych.  In fact, though, no earlier surveys ever found a majority in support of secession from Ukraine.  The Razumkov Centre and Rating Sociological Group carried out a survey from March 28 to April 2, 2014 everywhere except Crimea.  71.4% said that in a referendum, they would vote for Ukraine as a unitary state and only 17.1% were against.

Poignant evidence of what was needed to impose the rule of the so-called ‘Donetsk people’s republics’ was recalled over the last two weeks by many of those forced to flee from Donetsk.  On March 4 and 5 they recalled the huge demonstrations in the centre of Donetsk in support of Ukrainian unity.  The first of those, which brought together around 10 thousand people was a spontaneous and totally peaceful response to the pro-Russian demonstration on March 1 which supposedly elected Pavel Gubarev ‘people’s governor’.

Gubarev, who led crowds in storming the Donetsk regional administration building and hanging a Russian flag was one of the marginal figures cultivated from around 2006 by Moscow.  He was formally a member of the neo-Nazi Russian organization Russian National Unity.”  At least five other people who played an active role in the 2014 events were at a Russian training session in 2006 run by Alexander Dugin, the Russian fascist ideologue with connections in very high places.

A Russian Foreign Ministry statement issued on March 14 claimed that “peaceful demonstrators who had come out onto the city streets to express their attitude to the destructive position of those calling themselves the Ukrainian government were attacked by right-wing radical groups armed with shock pistols and bats who had begun arriving in the city the day before from different regions of the country.”

All video footage, for example, here www.youtube.com and witnesses told a different story.  So, tragically, did the first death – of 22-year-old Dmitry Chernyavsky, a pro-Ukrainian unity supporter.

It is important to stress that even in the Donetsk and Luhansk oblasts, neither Russian propaganda, nor a mass influx of ‘Russian tourists’ – of a specific age, athletic build and general thuggish appearance brought in by the busloads were able to create a mass ‘uprising’.

They were brought in precisely because Putin had got it badly wrong about ‘one nation’.