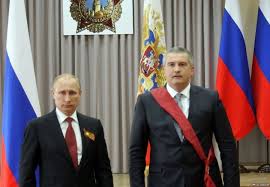 Sergei Aksyonov, the leader installed when Russian soldiers seized control in Crimea, has directly threatened that those who – in his words – ‘incite conflict’ and give people hope that Russia’s occupation will end will not be able to work in Crimea.  He made a specific attack on the Crimean Tatar television channel ATR.

In an interview given to the Russian agency RIA Novosti, Aksyonov stated that “inciting enmity between various ethnic groups in Crimea in the present difficult time is unacceptable, therefore all those who one way or another act in this manner, including media, will not be able to work in the republic. “

It is “unacceptable”, he claimed, when people “hit others head on over ethnic identity, try to cast a wedge between us, Russians and Crimean Tatars who have lived together for centuries.”

Aksyonov specifically mentioned ATR saying that “the management of the channel has been told that (it is unacceptable) to escalate the situation and arouse a feeling of tension among the population, linked with the fact that the channel gives hope of Crimea’s return to Ukraine, inciting other people to action, and speaks of how later those who received Russian passports will be dealt with.  The work of such channels at the present semi-war time is unacceptable”, Aksyonov said.

As reported, Russia’s media regulatory body Roskomnadzor has been finding all kinds of pretexts since last September to not re-register ATR according to Russian legislation.  If this does not happen in the next 10 days, before April 1, the channel will be forced off air.  The fact that Aksyonov wanted it closed was clear from an interview back on Feb 13, and the latest statement is no surprise.

It should be noted, incidentally, that Aksyonov and his then marginal Russian Unity party was instrumental in inciting ethnic tension in Crimea long before Russia’s invasion and annexation of Crimea.

Aksyonov’s equating a civic position against Russian occupation to ‘inciting ethnic enmity and tension” is also nothing new and is likely to be used as a weapon against any opposition.   This was seen from the outset in the bans imposed on Crimean Tatar leaders Mustafa Dzhemiliev and Refat Chubarov, and the deportation of native Crimean Sinaver Kadyrov.

One positive development is that Yury Stets, Ukraine’s Minister of ‘Information Policy’ stated on Thursday that ATR will be able to broadcast its content from mainland Ukraine.

Whether it will be blocked in Crimea remains to be seen.  The experience of the last year makes optimism on that score seem extremely misplaced.