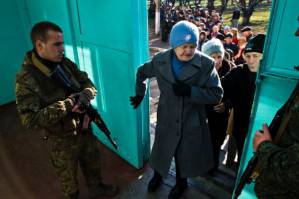 Ukraine’s demand that special status follow honest elections with international observers caused rage in Moscow.  Take away the machine guns at polling booths, elimination of opposition and European neo-Nazi ‘observers’, and the reason for hysteria from the Kremlin and their proxies in Ukraine is clear.

On March 17, Ukraine’s parliament adopted a resolution and law on special status for areas under Kremlin-backed militant control in Donbas.  The law was immediately condemned as a breach of the Minsk Accords by both the militants and Moscow, while welcomed by Germany and France as in keeping with those same Accords.

Resolution No. 2396 stipulates that the areas under militant control will be deemed temporarily occupied territory under all illegal armed formations and their military technology, as well as fighters and mercenaries are withdrawn from Ukrainian territory, and there is reinstatement of full control over Ukraine’s state border.  At present a large part of the border with Russia is under militant control.

According to the amendments to the Law on Special Status adopted on March 17, special status with limited self-rule will be granted after elections are held in accordance with Ukrainian law and with proper international observers.

This presumably means without polling booths where people are surrounded by militants brandishing machine guns, and with internationally recognized observers, not members of far-right and neo-Stalinist parties invited and paid by Moscow.

This was a part of the ceasefire agreement reached in Minsk on Feb 12, but such elections are clearly stipulated also in the original Minsk Protocol (Item 9) from early September, 2014.

Sergei Lavrov, Russia’s Foreign Minister claimed that it was a breach of those accords because it linked special status with elections in which the militants would not take part.   He does not appear to have explained why they would not take part.  The militants themselves have told Russian media that parliament is breaching the Minsk agreements and that such elections need to be ‘agreed’ with the self-proclaimed ‘Donetsk and Luhansk people’s republics’ [‘DNR’ and ‘LNR’].

Shortly after the Minsk agreement in September last year, the militants announced their ‘elections’ which they held on Nov 3, despite this being condemned by Ukraine and all western countries as in breach of the accords.  The event itself was widely criticized as bearing little in common with elections and even Russia eventually chose to only ‘respect’, rather than recognize the alleged results.

According to the new amendments to the law, local governing bodies whose members were elected in accordance with Ukrainian legislation would oversee governance with the regions exercising limited self-rule, while remaining a part of Ukraine.

Foundation for peace, pretext for war or just a piece of paper?

Liga.net asked a number of people directly following events in Donbas for their assessment of the move.

Serhiy Harmash, Chief Editor of OstroV, says that the law on special status changes nothing since it impossible to enforce.  He sees it as merely an item in the Minsk agreement to be able to report to the EU that it’s been done.  The resolution declaring the regions occupied is belated, he says, with the regions long occupied.  It is a chance for lodging legal claims against the aggressor, while also giving legal excuse for restricting citizens’ rights (with respect to passes for leaving or entering cities, non-payment of social benefits, etc.

With respect to Russia’s actions now, Harmash points out that Moscow were never restrained by any agreement.  “It’s just that everybody needed a breathing space, including the Kremlin.”  In fact, he believes that the fact that Ukraine is adding its rules, could drag out the peace since Russian President Vladimir Putin will be forced to modify his plans.

Well-known human rights activist Konstantin Reutsky who is currently one of the coordinators of the volunteer initiative Vostok SOS says that any ceasefire demoralizes the enemy and for that reason escalation is inevitable.  Although the amendments to the law on special status are clearly an insufficient pretext, its criticism by the Russian authorities suggests that they may try to use it to justify new confrontation. He points out that there can be no moral right given that the Kremlin-backed militants (together with Russian soldiers) attacked Debaltseve the day after the agreement in Minsk on Feb 12.

“The law passed is simply a restrained “no” to the cynical demand that Ukraine recognize a region filled with Russian soldiers and military equipment as a sphere of their responsibility. Ukraine is stating that it is ready to take on this responsibility, but only after its jurisdiction is restored.”

Calling the territory occupied is simply stating the obvious.  It will certainly irritate Russia, but since Putin will not stop at less than Ukraine’s total capitulation (open or covert), he says, a new wave of conflict is inevitable.

These new legislative initiatives have received widely differing assessments.  Most commentators, however, clearly expect the conflict to continue.  Western leaders who have been adamant in asserting the need for ‘dialogue’ and a negotiated settlement are also put to the test by these new moves.   Ukraine’s legislators have demanded only what the agreements stipulated, and what would surely be reasonable were there genuinely strong local support for separatist demands.

Western leaders should try imagining the course of such elections, under real observers and without masked men with machine guns.  It is unfortunately all too clear why Russia would find any pretext to prevent this.