More anti-Semitic vandalism in MykolaivMore hate-related acts of vandalism in Mykolaiv and the CrimeaProvocation over Crimean Tatar Deportation anniversaryDangerous manoeuvres in the CrimeaMustafa Dzhemiliev: Assault on Kurultay representative threatens Crimean stabilityWeekend attacks fuel inter-ethnic friction in the CrimeaAnger over latest desecration of Crimean Muslim religious symbolsGrave of Muslim Holy Man desecrated in the CrimeaAnother Muslim grave desecrated in the CrimeaMuslim Grave in the Crimea desecratedMuslim cemetery desecrated near SimferopolCossacks suspected of desecrating a Crimean Muslim CemeteryPossible breakthrough in finding those who desecrated a Crimean Muslim CemeteryCrimean Tatars accuse Crimean enforcement bodies of xenophobiaJewish community outrage over attack on Muslim cemeteryMuslim graves desecratedChief Rabbi of Odesa: “Ukraine is the safest country in the world for Jews” On documenting international crimes committed by the Russian occupiersChief Rabbi of Ukraine demolishes Putin’s excuse for Russia’s invasion The Facts about Anti-Semitism in Ukraine that Russia doesn’t want known
• Topics / Interethnic relations

Monument to Victims of Holocaust desecrated in Mykolaiv 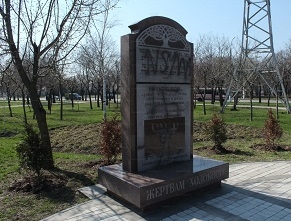 The Monument to Victims of the Holocaust in Mykolaiv has against come under attack.  During the night into March 22 a swastika was daubed from a black spray can on the monument, as well as the letters NSNK.  The first two letters obviously stand for National Socialist and the Euro-Asian Jewish Congress suggests  that the others may be Mykolaiv [in Russian: Nikolayev].

The monument was erected by the Jewish community in Dec 2011, and in June 2013 transferred to municipal ownership.

This is not the first such attack reported here, and the Congress reports that the monument was desecrated in September 2012; March, October and December 2013.

In 2013 neo-Nazis also desecrated a memorial plaque in the centre of Mykolaiv to Menachem Mendel Schneerson, the seventh and last Lubavitcher Rebbe.

As reported here, an attempt to set light to the Mykolaiv synagogue in April 2014 was thwarted by the swift action of a person driving past who not only called the police, but also stopped himself and used the fire extinguisher from his car to put out the flames caused by two Molotov cocktails.

None of the culprits of the above crimes has been found.