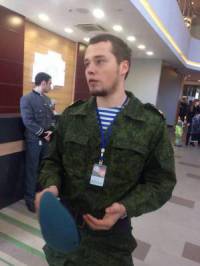 8 anti-fascist protesters were detained by police on Sunday outside the ‘International Russian Conservative Forum’ in St. Petersburg.  One of them was later taken away by ambulance following interrogation by officers from the Centre for Countering Extremism.  Russia’s anti-extremism squad would seem to have had problems only with those objecting to a forum in St. Petersburg of members of mainly European and Russian far-right and neo-Nazi parties.  Certainly the one ‘nationalist’ who was detained at the same time, and was reported by witnesses to have provoked conflict with the anti-fascist demonstrators and punched one of them in the face, had been released by early afternoon.  Four of the anti-fascist protesters, by contrast, were reported by OVDinfo to be spending the night in police custody and facing administrative charges.

The police saw no reason to detain notorious neo-Nazi sadist Alexei Milchakov who gained notoriety back in 2012 for torturing and killing puppies and calling on fellow neo-Nazis to kill down-and-outs and animals in his native St Petersburg and who is supposedly facing criminal prosecution.  Milchakov was part of the ‘delegation’, together with Norwegian neo-Nazi Jan Petrovsky (Veliki Slavian), from the self-proclaimed ‘Donetsk and Luhansk people’s republics’ which the Kremlin has been heavily arming and manning for the past year.   They doubtless found a lot to tell the forum about how they were fighting the Kyiv ‘fascist junta’ in Donbas.  Both were recently interviewed by the pro-Kremlin Life News, though without any indiscreet questions about their neo-Nazi views and sadistic ‘hobbies’.

Novaya Gazeta was less circumspect in questioning the two who both confirmed that they had come from Donbas at the invitation of the organizers. “Milchakov admitted to liking Hitler but with some qualifications”, naming the fact that 27 million “members of my people” were killed.

Petrovsky was asked about his “photo session against the background of killed Ukrainian soldiers”, and whether he considered that to be ethical.  Petrovsky answered that the photographing had been against the background of the equipment destroyed and the fact that there were also burned bodies of Ukrainian soldiers “did not particularly worry him”.

Asked his attitude to the Holocaust, he said he had none.  “If some people here deny the Holocaust, that’s their personal opinion and they have the right to express it.  For me it’s not even a subject for discussion. The Holocaust doesn’t affect me. I’m concerned by Russians, Europeans.».  There are things he relates to in the Third Reich, like the institution of the family and eugenics, not however, their relations with Russia.

The aims of the forum, as well as many of the parties attending, were reported earlier and there were few surprises, expect perhaps the inclusion of a current deputy from the Dnipropetrovsk regional council Viktoria Shilova (see programme below).  It is just possible that the motley array of marginal fascists and neo-Nazis was supposed to lull concerns about the growing rapprochement between Moscow and all anti-Europe and generally far-right parties.  Nick Griffin, for example, was present from the UK, but neither his new party nor the British National Party from which he was ousted last year have any real weight in the United Kingdom, unlike UKIP, whose leader Nigel Farrage has also come out strongly in support of Vladimir Putin.

Two parties which have established close ties and received considerable support from Moscow recently and which have consistently supported Russia against Ukraine were not present: Hungary’s Jobbik party and Marine Le Pen’s National Front in France.  The latter was taking part in regional elections this weekend where it gained around 26% of the vote, and it had been suggested that Le Pen preferred to avoid any negative fallout from being associated with some of the parties present on Sunday.  According to France Press, she did appear on Russian state television on Saturday condemning EU sanctions against Moscow and anti-Russian "propaganda", which she claimed is being done "under orders from the US".

This was fully in keeping with the reports from the St Petersburg forum where all speakers appear to have expressed support for Russia, berated US hegemony, homosexuality and, of course, Ukraine.  At a forum held a month and a half before the seventieth anniversary of Victory Day in one of Russia’s city-heroes which suffered immeasurably during World War II.  Held without any obstruction and with only anti-fascist protesters detained. 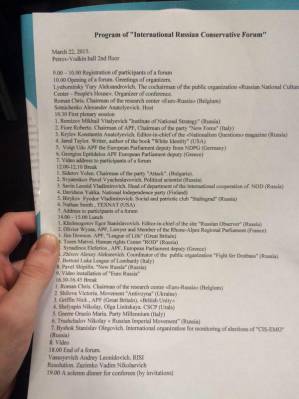