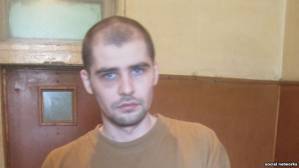 Crimea’s puppet ‘prosecutor’ Natalya Poklonskay has announced that the ‘case’ against EuroMaidan activist Alexander Kostenko over alleged actions in Kyiv before Russia annexed Crimea has been passed to the court.  Poklonskaya herself will be representing the prosecution in a trial which even by occupation regime standards reflects a mafia-like attitude to the law.

Kostenko has complained of ill-treatment in detention and his father was last seen 20 days ago, around the time that Kostenko’s allegations were made public.  In an open letter, Kostenko said that he had been subjected to constant ill-treatment and threats in order to force him to give testimony against EuroMaidan activists.  Kostenko’s father left for Kyiv after his son’s arrest on Feb 8 and the search of his home, but was forced to return when told of another search.  Radio Svoboda’s Crimean Service reports that relatives lost any contact with him when he was entering Crimea.  At the time the Crimean Mission suggested that his disappearance might be part of efforts to put pressure on Alexander.

The charges against Kostenko relate to protests which took place in Kyiv, not Crimea, and in February before Russian legislation was imposed at machine gunpoint on Crimea.   Even if the alleged offence had taken place, there would still be no possibility of a Crimean court having jurisdiction to hear the case.

Kostenko was arrested on February 8 and remanded in custody for 2 months on charges linked with EuroMaidan protests in Kyiv last February.  According to Poklonskaya’s ‘indictment’, Kostenko is charged under Article 115 § 2.b  of the Russian Criminal Code with “deliberate infliction of mild damage to health”, as well as Article 222 § 1 (unlawfully obtaining, keeping or carrying the main parts of a firearm”).   The investigators claim that “during mass disturbances in Kyiv in February 2014 he caused bodily injuries to an officer of the Crimean division of Berkut.  He was also allegedly keeping in his home, without the legally prescribed permit, a rifle barrel.”

There is no information about the specific injury the officer from the Crimean Berkut unit is alleged to have incurred. Nor is there any clarity as to how the “investigative body supported by the Crimean Prosecutor’s Office” should have determined that the injury was inflicteddeliberately, and presumably “for political or ideological motives”.

The Crimean Field Mission does not believe that there will be an objective ruling in this case and calls it politically motivated.  Olha Skrypnyk, Deputy Head of the Mission points out that both Kostenko and his lawyer have repeatedly reported the use against him of torture, meaning that the court will be considering evidence which was likely obtained by force.  The fact that he is being charged as a EuroMaidan activist and particularly that they have tried to get him to testify against other activists makes it difficult to believe that he will receive objective consideration of his case.