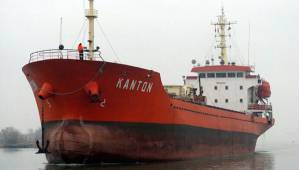 On Wednesday Ukraine took a first step in penalizing vessels which breach Ukrainian law and flout the UN resolution on Crimea by entering Crimean ports under Russian occupation.

At the initiative of the Prosecutor General’s Office, the ship Kanton, sailing under the flag of Tuvalu was arrested in the Kherson port, nine months after it is believed to have moored in the port of Sevastopol.

A Pechersky District Court ruling from March 24 allowed the application from the investigators to arrest Kanton and prohibit its use.  Written notification has been served on the captain of the vessel, a Turkish national, that he is suspected of the crime under Article 332-1 § 2 of Ukraine’s Criminal Code (illegally entering occupied territory) and the relevant request for international assistance has been sent to the competent authorities in Turkey.  The charges under that article carry a sentence of 3-5 years imprisonment with confiscation of the vessel.

This is the first very serious step, however precedents were first set back in early February, when Ukraine temporarily detained two boats breaching the law by entering Crimean ports.

The Knebworth tanker, Black Sea News reports, had entered occupied territory – Kerch Port on three occasions from April to June 2014.  It then entered Odessa and Ilyichevsk at least 10 times without facing legal consequences for breach of the law.

BS News’ monitoring team and Maidan of Foreign Affairs had constantly called on the enforcement bodies to take the appropriate measures, but it was only on Feb 2 that Ukraine’s authorities finally set the process in action.  On that occasion, the boats were held until Feb 5.

According to MP Georgy Lohvinsky, proceedings have been initiated against 69 boats which illegally entered occupied territory.  He promises that all 69 vessels will be arrested wherever they find them in accordance with international agreements.  Ukraine is determined to stop boats violating its borders in this manner.

As reported, Ukraine has every right to demand that ships which have illegally docked in Crimean ports are arrested in any port in the world, with this being in full accordance with the International Ship and Port Security Code.

There are a number of legal means, as lawyer Oleg Alyoshin explained, by which Ukraine can defend its interests. These include arrest of ships which enter Crimean ports under occupation and seeking a ban on their entry, with this also falling under the same International Ship and Port Security Code.

A law adopted by Ukraine’s parliament and in force since April 27 on ensuring citizens’ rights on temporarily occupied Ukrainian territory added an article to the criminal code with liability introduced for violating the rules of entry to occupied territory.  It is this new clause which has been cited in the action against Kanton.

There was also an order issued on July 15, 2014, by Ukraine’s Infrastructure Ministry which closed various Crimean ports to international shipping.  The information was passed to the International Maritime Organization and its members, as well as to representatives of foreign companies with IMO accreditation.

While most foreign ships stopped coming into Crimean ports after the UN resolution at the end of March 2014 which called on international organizations, including the IMO, to not recognize any change in the status of Crimea and Sevastopol and to refrain from any actions that could be viewed as recognition.

Some have, however, openly flouted the ban, such as Ocean Majesty, a Greek luxury cruise liner operated by the German tourist agency Hansa Touristik GmbH which moored in Yalta on Sept. 17, 2014.  As reported at the time, while 500 German tourists were enjoying the Crimean Sun, a major armed offensive was underway against the Mejlis, or Crimean Tatar representative assembly.

This was not the only breach and the perpetrators doubtless believed that they could help violate Ukraine’s sovereignty with impunity.  The arrest of Kanton is a vital step in proving them wrong.