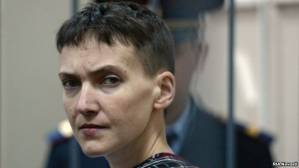 Moscow’s Basmanny Court has agreed to call a further charge in the indictment against Nadiya Savchenko, one that carries a 20-year prison sentence, a “technical mistake”.  It found no problem with the investigators’ merging of two other charges against the Ukrainian pilot, one of which was announced the day after PACE demanded her release within 24 hours.

Nadiya Savchenko, looking dangerously fragile, was brought to the court on March 26 after protesting over plans to keep her away and instructing her lawyers to not take part in any court hearing in her absence.  After a 10-day break, Savchenko has resumed her hunger strike which she began on Dec 13, 2014 and according to lawyer Nikolai Polozov weighs only 53 kilograms.

Another defence lawyer Mark Feygin pointed out in late February that a new charge - Article 356 § 1 - had been slipped into the indictment without any new circumstances or evidence presented.  The article in question concerns liability for the use of prohibited means and methods of warfare, including ill-treatment of POWs or civilians, deportation of civilians, or plundering national property on occupied territory.   Radio Svoboda reports that this was supposed to be  based on testimony from a “Luhansk separatist” who claimed that Savchenko had tortured him.  If this is the case, then presumably the evidence Savchenko’s lawyers presented was so irrefutable that the Investigative Committee [IC] felt it better to leave this charge out.  TASS reports that the IC spokesperson told the court that Savchenko is not charged with using prohibited means and methods of warfare, and that the presence of the article in question “can be regarded as a technical error, a typo”.

Judge Arthur Karpov who has consistently allowed the prosecution’s demands to keep Savchenko in detention, accordingly declared the article to be a “technical mistake which does not influence the course of the investigation”.

Karpov also rejected the defence’s appeal against the merger of two charges against Savchenko, one of which was only formally laid the day after the Parliamentary Assembly of the Council of Europe (PACE) demanded the Ukrainian MP and PACE member’s release within 24 hours.

Savchenko was captured by Kremlin-backed militants in Luhansk oblast [Ukraine] on June 17, and taken by force to Russia where a court on July 3 remanded her in custody.  The investigators accused her then of being implicated in the death of two Russian journalists whom Moscow has insisted from the outset, without providing any credible evidence, were killed deliberately, and not just caught in mortar fire.  The charges appear to be based solely on testimony from the militants and the court has ignored proof that Savchenko was already captured when the journalists died.

In October 2014 the IC first suggested that Savchenko could be charged with ‘illegally crossing the border’, but nothing was done until hours after a PACE resolution on Jan 28 called on the Russian authorities to release the Ukrainian PACE member “within 24 hours and to ensure her return to Ukraine or to hand her over to a third country”.

Even without Savchenko’s own testimony that she was taken across the border bound and with a bag over her head, it is impossible to give any credence to a story which would mean that after being inexplicably released by the militants, she made her own way across the border into Russia.  This is not to mention the nonsense implicit in charging a person who Russian investigators claim entered “pretending to be a refugee” with illegally crossing the border.

Savchenko spoke during the hearing asking the judge to be guided by the law, and not political preferences.  Like the demands from PACE, the EU, UN and all democratic countries to release Savchenko, it was a call that went unheeded.