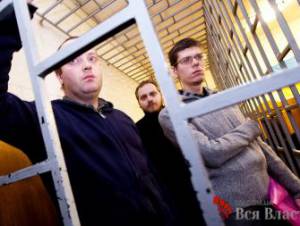 Ukraine’s High Specialized Court dealing with cassation appeals has revoked the rulings in the first instance court and at appeal regarding three men whose arrests and trial under President Viktor Yanukovych became known as the ‘case of the sacristans’.   All three – church sacristan Anton Kharytonov; his brother Serhiy Dyomin and sacristan Yevhen Fedorchenko - had been sentenced to long terms of imprisonment despite the lack of any evidence and multiple ‘confessions’ which all had later said were made under duress.

There is, however, no sign of any of the police; prosecutors or judges facing any kind of penalty or dismissal for their part in a case which human rights lawyer Oleh Levytsky once called the most shameful since Ukraine gained independence.  Quite the contrary – some of the people have even been promoted.

The high court sent the case back for new court consideration, however without a new criminal investigation, it is difficult to imagine this being anything but a way of quietly shelving the case.

The three were released in March 2014 under the amnesty law for political prisoners, passed soon after Yanukovych fled the country.  They had spent almost 4 years in custody charged with a crime that nobody ever believed they committed.

It was with good cause that one of the appeals launched here for a review of their case was entitled “A Trial with Grave Consequences”.  It was signed, among others, by former political prisoners, lawyers and human rights activists.

On 28 July 2010 a bomb exploded in the Svyatopokovsk Church, Zaporizhya, injuring 9 people, one of whom, an elderly nun, died later of her injuries. On 29 July, Yanukovych was seen on television ordering the heads of law enforcement bodies to find the culprits immediately. He was assured that the crime would be solved within the week, and those responsible arrested.  On 6 August the Interior Minister announced just as publicly that the crime had been solved and the culprits were in custody.

The first young man, Anton Kharytonov was taken to the police station on the morning of 30 July. Over the next few days, he made four mutually exclusive ‘confessions’.  His brother – Serhiy Dyomin. - was detained late that evening – he made two.  Yevhen Fedorchenko was remanded in custody on August 4 by which stage the final version of the charges had been fixed.  He made one.

Dyomin initially “confessed” on 1 August to making the explosive device and during an investigative experiment was filmed demonstrating how he’d done so.  After explosives experts rubbished that version, placing in serious doubt his knowledge of explosives and ability to make such a bomb, another ‘confession’ was forthcoming.  This time he was supposed to have bought the explosive device “from an unidentified individual”.

Most of those who took part in the investigation and prosecution received awards for their swift work.  Those above them had boasted that the crime had been solved, and nobody wanted to admit having arrested the wrong people.  There is no evidence that the other leads in the crime were investigated at all.  Once Anton Kharytonov had been detained, and then his brother, the process just went on.   Seven “confessions” were extracted and no attempt was made to investigate the men’s allegations, once they finally received real lawyers, that they had made them under duress.  Two forensic psychology assessments which confirmed that the men had not ever volunteered information and had been under serious psychological pressure simply prompted judge Volodymyr Minasov to order a third assessment which found no duress.  Since the tapes and transcripts are available, it was very easy to determine which conclusions were credible.

The list of infringements committed by Minasov and the prosecutor was huge, with the indictment even cleaned up to remove such inconvenient points as the fact that all three men had cast iron alibis. .

The Zaporizhya Regional Court of Appeal noted many of these irregularities which, according to Ukrainian legislation, demanded that a mistrial be declared.  It even seemed at the penultimate hearing that this was the inevitable outcome.  Whether the judges came under pressure is not clear however on Oct 25, 2013, they upheld the original verdict, only reducing each sentence by one year – to 13 and 14 years imprisonment.

The current Zaporizhya Prosecutor Oleksandr Shatsky was one of the few who consistently spoke out about the travesty of justice destroying three men’s lives.  Last March, just after being appointed prosecutor, he stated that there would be a proper end to this case only when those judges, prosecutors and police officers responsible for the infringements were held to answer and the real culprits who planted the bomb were found.

The men are, thankfully, free, but the proper end to the case is nowhere in sight.