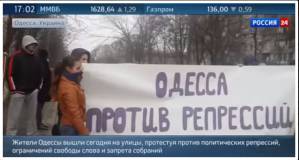 With attempts to cause real disturbances and protests in Odessa having encountered stubborn resistance,   orchestrated versions are being staged, with their participants seemingly receiving money for waving banners, shouting about ‘repression’; blocking roads and overturning cars.  There is a fine line, however, between stunts and serious provocation with conceivably tragic consequences, and both the police and Odessa civic activists are following the situation carefully.

On March 19, a group of young people blocked the road on Ilf and Petrov St, overturned a car, and made a huge din while the camera focus moved from banner to banner, with the words on all alleging grievances over repression, infringements of free speech, etc.

The video is posted here https://youtube.com/watch?t=19&v=SZn3ItL93Ok and has been broadcast on the pro-Kremlin Rossiya-24 TV channel.  The latter clearly felt that the outskirts were not good enough and said that the ‘protest’ had taken part in the centre of Odessa.   The police denied that there had been any disturbances, calling the video a fake, while a pro-Ukrainian civic initiative Oberih has been carrying out its own investigation.  It says that the event in fact took place at 7.30 in the morning when most of Odessa was only just waking up and lasted only about 20 minutes.  The participants, it asserts, were mainly from the Odessa oblast with only around 5-7 from the city itself. There were two busloads bringing people, however one was stopped by the traffic police.  There were around 40 people altogether, many of whom they photographed at another meeting on March 21 on Soborna Square.

On that same March 19, Oberih reported that it had “uncovered and prevented yet another attempt to create a picture for the propaganda media”. Around 60 students gathered on Soborna Square, got into a coach and headed off to make the video.  Some of the students told Oberih members that they’d been promised 50 UAH.  Oberih suggests that in fact those ordering the stunt were prepared to pay up to 500 per person.

It reports also, providing photographic evidence which Dumskaya.net has posted, that the same people were involved at the meeting they prevented and at a meeting that did take place on March 21 on Soborna Square.

Oberih stresses the importance of finding out who the organizers are of these stunts, as well as who commissioned them.  They ask members of the public to contact them with any information.

The police are now taking the situation seriously.  Dumskaya.net reports that on March 25, a similar stunt was attempted, this time on Pasteur St, with 6 people detained.  Volodymyr Shabliyenko, Press Secretary for the regional police, says that these ‘pseudo demonstrations’ are aimed at creating a negative picture for Russian TV.  According to police and SBU [Security Service] information, a similar scenario was planned with the street being blocked and a car overturned.  Shabliyenko says that the students hired were paid 150 UAH each.

He warns people, especially students, planning to make a bit of money this way that their actions will be viewed as an attempt to cause mass disturbances.  This falls under Article 294 of the Criminal Code and carries a sentence of between 5 and 8 years imprisonment.  If people are killed, then the sentence is up to 15 years. “Think about that before you agree to such dubious offers”.

Many of the fakes on Russian propaganda channels uncovered last year were reported in the western media as something humorous.  It is 11 months now since a group of pro-Russian activists attacked a totally peaceful pro-Ukrainian rally in the centre of Odessa.  The resulting disturbances on May 2 and fire in the Trade Union building on Kulikovo Pole claimed the lives of 48 people.  They have also been used as part of a monstrous propaganda campaign with Russia claiming that pro-Russian activists were deliberately burned alive.  This in turn has been used in Russian and Kremlin-backed militants’ warmongering propaganda to recruit fighters for their undeclared war in Donbas.

Propaganda kills, and there are no grounds for treating any fakes and propaganda stunts with humour.