‘Convicted’ in Russian-occupied Crimea of holding a Ukrainian Flag 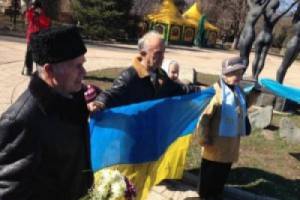 As was unfortunately expected, Crimean Tatar national movement activist Kurtseit Abdullayev has been sentenced to 20 hours community work by a district court in Simferopol.  His ‘offence’ in Russian-occupied Crimea – the Ukrainian flag with the words “Crimea is Ukraine” which he held at a peaceful gathering on March 9, the anniversary of Taras Shevchenko’s birth.

Commenting on the ruling, Abdullayev repeated that he has no intention of “sweeping the streets”, and insisted that he had not done anything against the law.

“I had the right to hold the flag of this country because Shevchenko is a Ukrainian poet.  I will lodge an appeal, and think it won’t end with Crimea, we’ll go to Moscow”.

The first hearing was on Friday however Abdullayev asked for an adjournment in order to read the ‘case’ material.  Journalists asked him then what kind of ‘punishment’ he would prefer, given that the other three people received 40-hour community service sentences.  He replied that he is near retirement, has no money, nor is the state paying him anything in order to be able to make deductions.  He has no intention of sweeping the streets and says that he would prefer to sit out a 15-day jail term, at least he’ll get free food.

He explained that he had studied both the Russian Constitution and the Constitution of Crimea and can see no way in which he committed any infringements on March 9.  “As a citizen I have the right to my opinion. There were no calls on others”.

It is not clear what the charges against him allege, however there has long been concern that Russia and the occupation regime in Crimea could use the new article of the Russian Criminal Code [calls to separatism] to prosecute for simply stating that Crimea is part of Ukraine.

Formally Abdullayev was charged with infringing the procedure for holding meetings, as were Leonid Kuzmin; Alexander Kravchenko and Veldar Shukurdzhiyev, who were sentenced on March 13 to 40 hours community work.  However the police had claimed, and the court agreed, that the Ukrainian flag and blue and yellow ribbons constituted  ‘prohibited symbols’.   All three men were shortly afterwards formally warned about ‘extremist behaviour’.

Kuzmin’s appeal against his sentence has already been sent to the Crimean Supreme Court.  He reports that the initial case had only 18 pages, whereas the file sent by the original court has 62.  He understandably wants to know where these other 42 pages appeared from.

It remains to be seen what the prosecution has come up with to explain a prosecution and conviction that can have no justification.

This was the first case where a court treated a Ukrainian flag as a prohibited symbol and imposed a sentence for this alleged ‘offence’.

The event that has resulted in four such prosecutions can be viewed here:

One person whom they did not try to arrest was pensioner Klavdiya Ivanivna (at 1.19 on the tape).  Her words are translated here.