Bombs and War turn Odessa away from ‘Russian World’ 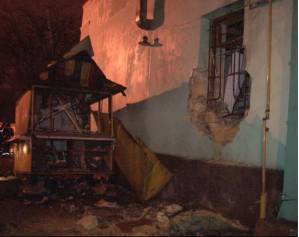 If the bombs directed at volunteer organizations in Odessa, for which nobody has yet claimed responsibility, are intended to frighten people away, they have so far proven totally failed

Sewing camouflage netting for Ukrainian soldiers has become an act of courage in Odessa.  One that the bomb blasts targeting volunteer organizations have so far proven powerless to stop.  Quite the contrary.  After speaking with volunteers in Odessa, Kristina Berdinskykh writes in the journal New Times that the “street blasts and war have achieved what the Kyiv government were long unable to do.  People in Odessa have virtually buried the idea of their city becoming a part of ‘Novorossiya’”.

It was Russian President Vladimir Putin on April 14, 2014, who first referred to ‘Novorossiya’ as including the Donetsk; Kharkiv; Kherson; Luhansk; Mykolaiv and Odessa oblasts.  Two days earlier, masked men with machine guns had seized official buildings in Sloviansk, and soon afterwards in a number of other cities in the Donetsk oblast.  The armed groups were formed in Crimea which Russia had annexed in March and led by Russian national Igor Girkin [nom de guerre: Strelkov], who has been identified by US officials as working for Russia’s GRU military intelligence service.

Russian pro-Kremlin channels began speaking of “the South-East of Ukraine” as being one entity, with so-called separatist uprisings guaranteed throughout the area.  The term is still standard in Russian propaganda, however the reality has proved different.  Those cities liberated from the pro-Russian militants – Mariupol; Sloviansk and Kramotorsk – do not want to return to the militant fold, and the pro-Russian protests in Kharkiv and Odessa did not gain widespread support.

Since April 25, however, both Odessa and Kharkiv have been the target of frequent terrorist attacks, mainly bomb blasts.  Berdinskykh’s article published on March 20 mentions 23 such attacks in Odessa, as well as 5 bombs defused in time.

The latest blast in Odessa was late in the evening on March 28 and probably deliberately timed for a day honouring the National Guard now fighting in eastern Ukraine.  Like half or more of the previous bombs, it was planted in a building that houses two volunteer centres, one helping the war effort [the ATO or ‘anti-terrorist operation’ in Donbas] and the Civic Corp of the Azov Battalion.  Most ominously, the bomb was placed near a gas pipe.  Since negotiations were already underway to connect the gas, cut off after the previous occupants left, the terrorists may have wanted to cause major loss of life.

Up till now the bombs, exploding in the late evening, have not killed anybody.  For this reason, Berdinskykh writes, local analysts believe that the bombs are the work of pro-Russian groups seeking to create a permanent feeling of tension and destabilize the situation in an region which this time last year was seen as strongly pro-Russian and widely predicted to be the next trophy for Putin’s ‘Novorossiya’.

According to Viktoria Sibir, press secretary of the Odessa Self-Defence [originally linked with EuroMaidan], the situation in Odessa has changed dramatically since a year ago.  Coffins are arriving back from the area of military conflict, and nobody wants war to come also.  “Therefore Odessans actively help the army, and there are numerous volunteer organizations in the city”.

“I can’t help financially, but I also can’t bring myself to just sit at home”.   This was how Mila, a pensioner, explained why she was there helping to weave camouflage netting for the front.

Many Odessans name the terrible events on May 2 as a turning point.  An initial attack by pro-federalism activists on a pro-Ukrainian unity march that day led to disturbances and a fire in the Trade Union building in which 48 people from Odessa and the oblast died.

The senseless loss of life jolted a lot of people in a city of great diversity, accustomed to protests which at worst ended in fistfights.  The events, including the publicity over the questionable role of some enforcement officers, led to a noticeable reduction in pro-Russian activities in the city.  A few individuals, like Vitaly Budko [Botsman], seen shooting at pro-Ukrainian activists and former deputy head of the Odessa Police,  Dmytro Fuchedzhy are on the run, others – like Igor Markov, head of the pro-Russian Rodina Party – felt it safest to leave the country.  Some activists are also fighting on the militant side in eastern Ukraine.

Another jolt from the events came in the brazen manner in which they were distorted from the outset by Russian propaganda.  A whole campaign has been waged to ignore the role of pro-federalism activists and present the events as a brutal attack by ‘radicals’ who supposedly burned pro-Russian activists alive, and even killed those who managed to escape.

This narrative is totally refuted by Tatyana Gerasimova, Serhiy Dibrov and other members of the May 2 Group, a civic initiative made up of journalists and others from the opposing camps.  The Group was formed partly as an attempt to counter these lies, and to ensure a full and objective investigation.  Their evidence has been invaluable in piecing together what happened.

Invaluable for those who want the truth, that is.  Russia’s propaganda machine has expended huge amounts of money on pushing a ‘massacre narrative’ throughout Europe and beyond, and is impervious to all proof that there was no massacre.

It is significant that many of those fighting in Donbas on the Kremlin-backed militant side have mentioned this narrative about the events in Odessa on May 2 as a kind of final straw, the motivation for them fighting what Russian propaganda termed the ‘Kyiv junta’.

According to a recent survey carried out for the newspaper Dzerkalo Tyzhnia by the Kyiv International Institute of Sociology, only 30.5% of people from the Odessa oblast want their oblast to remain in Ukraine as per the current Constitution, whereas 57.7% want to remain within Ukraine, but with decentralized power; and a further 5.9% want to live in a federal Ukraine.   Nobody (0%) expressed a wish for their oblast to become a federal subject within the Russian Federation, while 1.3% wanted to follow the example of the so-called ‘Donetsk and Luhansk people’s republics’.  There were also 2.2% undecided and 2.4% who refused to answer.

There are different ways of assessing those results, of course.  It is worrying that less than a third are quite happy with the status quo.  It is, however, significant that in this predominantly Russian-speaking oblast, there is effectively no support for joining Russia, or for repeating the experience of the Kremlin-backed militants in Donbas.

There have been plenty of attempts over the last year to ferment trouble in Odessa.  As well as the numerous terrorist acts, there have also been fake protests over the last few weeks, which have promptly been shown on Russian television.  It is known that those taking part are paid for their participation, precluding any grassroots initiative by local pro-Russian activists.  These are by no means the only fakes.  Back in October 2010, Jewish communities around the world were initially alarmed after the Russian pro-Kremlin Izvestia published an article entitled “Right Sector” has declared war on Jews in Odessa” , with the alleged atrocities then repeated by Russia’s LifeNews and other pro-Kremlin channels.  All information was immediately refuted as cynical provocation in an official response from Berl Kapulkin, Press Secretary of the Odessa Jewish Community.

The Kremlin’s leader may believe that Russia has some special stake in Odessa, but Odessans themselves are consistently demonstrating that they hold a different view.